Mets vs Giants Picks and Predictions: Pitching Rules the Night at Oracle

The Mets have dropped four in a row and 11 of their last 15 heading into tonight's game against the red-hot Logan Webb and NL West-leading Giants. But they offer great value as +145 dogs behind Marcus Stroman. Find out more in our Mets vs. Giants picks.

Things will only get tougher for the reeling New York Mets on Tuesday as they continue their three-game set against the NL West-leading San Francisco Giants, who turn to the red-hot Logan Webb after trotting out ace Kevin Gausman for the series opener.

New York, losers of four straight, has dropped 11 of its last 15 to fall to .500 overall and third place in the NL East. The good news for the Mets is that they will have the reliable Marcus Stroman on the mound, but is he enough to make them worth a play as a +145 underdog?

Find out with our free MLB betting picks and predictions for Mets vs. Giants on August 17.

Marcus Stroman (8-11, 2.78 ERA): The right-hander has been consistent, putting up a sub-4.00 ERA in every month this season, which has helped lead to his sparkling 2.78 ERA — a career-best mark. He has allowed two runs or fewer in five of his last six starts but the Mets have only won two of those games.

Logan Webb (6-3, 2.96 ERA): Webb has been even better than Stroman recently, putting up a 1.50 ERA over three August starts while working six innings in each of them. He has 20 strikeouts and four walks over that stretch and the Giants have only lost one of his last 10 outings.

The Under is 7-3-1 in the last 11 head-to-head meetings. Find more MLB betting trends for Mets vs. Giants.

The Mets are struggling to say the least, with their chances of making the postseason down to 11.9 percent according to FanGraphs, but they aren't going to lose forever and this isn't the worst spot to take a chance on them at plus money behind Stroman.

He has allowed three runs or fewer in 75 percent of his outings this season and has recently handled tough lineups, including the Reds, Phillies, and Braves. San Francisco, winners of eight of nine, will be another tough task as the club ranks fifth in MLB in OPS, but Stroman's ability to avoid big damage by keeping the ball on the ground makes him a strong play against nearly any club.

While the bigger concern is the Mets' offense that has mustered an average of 3.80 runs per game this season (the third-lowest mark in baseball), they have scored five-plus runs in four of their past seven games and at least four in all but one of them following a run of scoring three runs or fewer in four consecutive losses.

We aren't predicting the Mets to do major damage against Webb, who has gone six innings in four straight starts and allowed two runs or fewer in all of them, but they should give Stroman enough support to keep this one tight.

And with New York coming in at an enticing +145 price tag compared to San Francisco's -170 odds, that's enough for us to side with the Mets to end their skid tonight.

The total for this game opened at 8 and remains there as of Tuesday morning.

While neither starter is likely to go too deep, with Webb logging more than six innings just once this season and Stroman reaching that mark only once in his last 10 starts, the runs will be hard to come by for as long as they are on the mound.

Stroman ranks ninth among qualified starters in earned run average and has kept his ERA below 3.00 for the entire season. He's not going to blow hitters away but he's a model of consistency and rarely gets blown up. A big reason for that is his ability to keep the ball in the yard.

The groundball artist has a proven track record of not getting burned by the long ball and this season has been no different. His 0.81 HR/9 rate is right in line with his career mark and pitching this game at Oracle Park is unlikely to reverse that trend, even against MLB's top home run-hitting team, as San Francisco's home park is consistently one of the most difficult stadiums to go deep in.

Webb, meanwhile, has an even lower home run rate — ranking in the Top 15 among starters who have logged at least 80 innings — and he's on a run of 10 straight starts of allowing two runs or fewer. He's been especially dominant at home, pitching to a 1.58 ERA and 0.97 WHIP while holding hitters to a .201 batting average over eight outings.

The Under has cashed in six consecutive Stroman starts with the total set at 7-8.5 and is 6-0 in Webb's last six starts as a home favorite. We're not betting against that tonight. 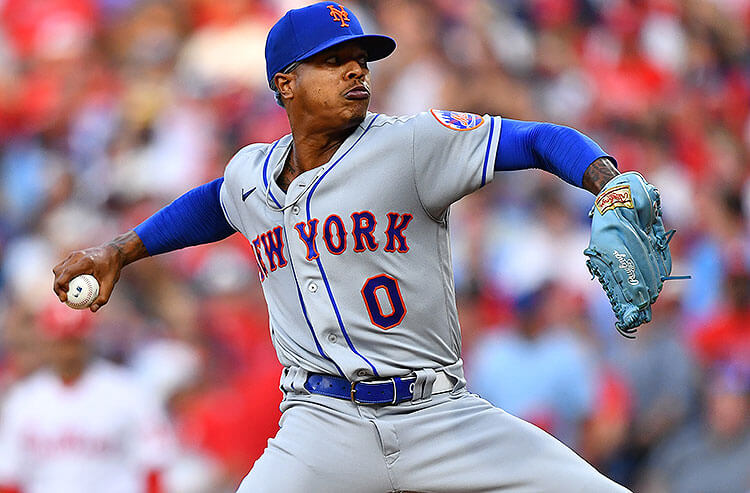 Mets vs Giants Picks and Predictions: Pitching Rules the Night at Oracle
Provided by