The Jays pounced on a vulnerable pitcher last night, but we don't see much weakness in tonight's matchup with Jameson Taillon on the mound for the Yankees. Our MLB betting picks think the market may have played itself here.

The Toronto Blue Jays took it to Frankie Montas and the New York Yankees last night as +144 dogs in a 9-2 win, but now today’s game sits as a pick ‘em.

Is the 50-plus point swing too much or are the Yankees playing to their 4-12 SU August record? Find out in my free MLB picks and predictions for Jays vs. Yankees on Friday, August 19.

The Yankees opened as -130 favorites and following last night’s loss, saw that number move to -110 while some books have made the visitors the favorite. The total opened at 8 and hit 7.5 early this morning after closing at 8.5 last night.

Kevin Gausman (8-9, 3.16 ERA): Gausman will look to stretch the Jays’ winning streak to three games today. The righty is coming off a rough five-run outing to the Guardians and has been bad in his losses (5.60 ERA) compared to stellar in his wins (1.72 ERA).

He's a tough pitcher to handicap because books price him as an ace but he’s recorded a quality start in just eight of his last 16 starts dating back to May. He has not seen the Yankees since the first month of the season and the Jays are 11-11 SU when he starts this season. His road splits are impressive (1.83 ERA) and include just one Bottom-10 offense.

Jameson Taillon (11-3, 3.95 ERA): Taillon comes in today with similar question marks to yesterday's starter, Frankie Montas. He’s allowed 12 runs over his last three starts (18-plus innings) but has gone seven innings in back-to-back starts. He isn’t missing many bats but is efficient and is averaging nearly 18 outs per start while batters are hitting just .192 over five second-half starts.

The Blue Jays are 3-7 SU in the last 10 meetings. Find more MLB betting trends for Blue Jays vs. Yankees

The Jays closed as +144 underdogs last night in a matchup that was fairly even in terms of starting pitching. Toronto had the edge offensively, and will again tonight, but New York as a -105 underdog today seems like a serious overreaction from bettors and the market.

The Yankees used their good bullpen heavily on Wednesday and didn’t have the edge in the later innings last night like they do tonight. Frankie Montas had to eat some innings and pitched through the sixth despite allowing six runs and eight hits.

Gausman is the better of the two starters but he comes with some baggage and is coming off a bad start to Cleveland. The Jays have struggled to win of late with him on the mound, as they're 4-8 SU when he starts since the beginning of June. He could certainly navigate this banged-up New York lineup, but I don’t see how the Gausman vs. Taillon matchup is 55 points different than yesterday’s Jose Berrios vs Montas one.

Don’t let last night’s win fool you, just three days ago, the sky was falling for the Blue Jays who are 20-21 over the last two months and scoring just 4.12 runs per game compared to their season average of 4.73. This is a team that came into last night's game scoring in just 1.23 innings per game over its previous seven matches.

Taillon is also a good pitcher to back at this price and has gone deep over his last two starts. He’s keeping batters at bay with a sub-.200 batting average in the second half of the season and is 3-1 over four meetings vs. the Jays this season with a 2.05 ERA.

The Yankees have won 17 of the 22 games Jameson Taillon has started this season.

Taillon can become the fourth AL pitcher to reach 12 wins this season (Verlander, Cease and Manoah).

This is a very price-driven play, and the market’s confidence in the Yankees could be at a season-low point which is great for New York backers today. Taillon is a good pitcher to keep this game close and I’d play the Yankees as low as -115 or -120.

I smartly stayed off the total of 8.5 yesterday as both Montas and Berrios were tough pitchers to handicap in regards to a total thanks to poor form. Today might be the same situation.

Everyone knows that the Yankees’ offense is struggling and is the reason for a 4-12 SU record in August, but in his last start at home, Taillon had a closing total of 8.5 versus a very good Seattle offense and Logan Gilbert on the mound. This 7.5 line might also be an overreaction, but New York still has a lot of talent in the top half of its order and the Jays have scored 15 runs over their last two games.

Vladimir Guerrero Jr.’s home run last night was a dinger only at Yankee Stadium, which is another factor that can frustrate total bettors in the Bronx. Routine flies to the short porch can burn an Under ticket quickly, as it did last night.

This would have been a home run at Yankee Stadium and nowhere else.

If this game finished 3-2, I wouldn’t be surprised, as both Gausman and Taillon can get deep, however, the top of each order boasts too much power for an Under 7.5 play that is juiced. I was surprised to see this total drop from 8 to 7.5 and would expect it to close at 8.

So, if that's enough for you to play the Over 7.5, go ahead, but I’m off this total again.

Thanks to a moneyline that has swung too far in my opinion, we’re getting a solid price on Taillon’s earned runs market that sits at 2.5 at plus money to the Under.

The righty has held this potent Jays offense to two or fewer runs all four times he's faced them this year, including twice at home. He’s allowed just five earned runs over 22 innings, is striking out a batter per frame, and has a sub-9.00 H/9.

Taillon has elite command, allows soft contact, and owns a very good groundball rate of 42.3%. His 5.7% weak contact rate is also something that can get him out of trouble vs. a Toronto team that grounds into double plays at the fourth-highest rate in baseball.

Montas has looked awful since being acquired by the Yankees but Taillon should settle the ship and give a much better performance today. The Yankee starter will also have an elite framing catcher in Kyle Higashioka and a hitter-friendly park with double-digit winds blowing away from right field. His bullpen is rested and THE BAT has him projected for just 91 pitches today. 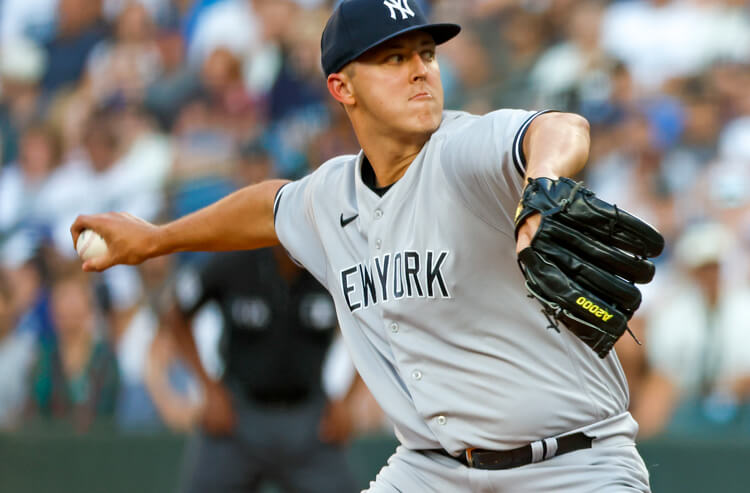