After two straight high-scoring affairs saw Minnesota leave on the winning side, the Twins are left with a weak Chris Archer on the mound and an exhausted bullpen. Expect Guerrero Jr. & Co. to take advantage with the Over cashing yet again.

After taking the opener, the Toronto Blue Jays have dropped the last two against the Minnesota Twins. The Blue Jays will try and salvage a split on Sunday and are pinning their hopes on starting pitcher Kevin Gausman.

The Blue Jays find themselves favored, mainly on the basis of Minnesota’s starter Chris Archer, who has struggled in his last three outings. The Over is the play for Sunday’s game, especially after it's hit in three straight.

Can Toronto manage to get the split or will the Twins take three of four? Find out with our MLB picks and predictions for Blue Jays vs Twins on August 7.

Kevin Gausman (8-8, 3.06 ERA): The right-hander is coming off his best performance of the year when he faced the Tampa Bay Rays last Tuesday and allowed no runs on one hit in eight innings. He walked one and struck out 10. Before that start, he had been shaky coming back from an ankle injury suffered on July 2. He returned July 14 and gave up two runs on seven hits to the Kansas City Royals. His next two starts were worse, allowing three runs on seven hits to the Boston Red Sox, but still managing to get the win. He was shelled on July 27 by the St. Louis Cardinals, allowing five runs on eight hits in 4 2-3 innings.

Chris Archer (2-5, 4.05 ERA): It has been a rough return for Archer, who came back from being on the injured list after a hip injury. The 33-year-old righty’s first start back was against the Chicago White Sox and he was tagged for four runs on five hits in just 4 2-3 innings. His next start 10 days later came against the Milwaukee Brewers, allowing six runs on three hits, including a home run in less than just three innings. His last outing Tuesday was slightly better, giving up two runs on two hits, but again pitched just 4 1-3 innings.

The Over is 5-0 in the last five meetings between the two teams. Find more MLB betting trends for Blue Jays vs. Twins

The Twins have taken the last two games of this series but it has come at a price.

The bullpen used six pitchers to get Saturday’s 7-3 victory and Twins starter Chris Archer hasn’t gotten to the fifth inning in four games as Manager Rocco Baldelli has been careful not to overextend the veteran. That has been especially true since he came back from a hip injury nearly a month ago.

They will have new closer Jorge Lopez available but the former Baltimore Oriole, who was acquired last week, blew his first save opportunity with his new club on Friday.

Though the Twins are ninth in batting average, 10th in hits, eighth in home runs, and 10th in RBI, they have gone 4-6 in their last 10 games and are hitting just .218 over that span.

The Blue Jays are in the top spot in the Wild Card race and would like to stay there. They aren’t catching the New York Yankees, who have the second-best record and a 10.5-game lead over Toronto.

Toronto looks to be in a position where they can take advantage of Archer. They have the best batting average in the majors at .264 and are fifth in runs, second in hits, sixth in homers, and third in RBI.

The Blue Jays are 5-1 in their last six road games against right-handed starters and 7-2 in the last nine against AL Central teams.

The Twins are 3-8 in their last 11 against a team with a winning record and 2-7 in their last nine home games against right-handed starters.

Toronto starter Kevin Gausman had allowed no runs in his last outing but that doesn’t mean the 31-year-old isn’t susceptible to handing out runs.

In his previous three starts before Tuesday’s blanking of Tampa Bay, he allowed 10 runs in 15 2-3 innings, including four home runs.

Minnesota starter Chris Archer has been generous with the runs as well. The righty has allowed 12 in his last three starts.

They have done much better against each other in this series, with the Over hitting in all three games and the teams combining for 33 runs. The Over is also 5-0 in the last five games between these two teams.

The trends favor the Over as well. The Over is 6-1 in the last seven for the Twins against a team with a winning record. The Over is also 12-3-2 in the last 17 games for Minnesota against right-handed starters.

The Blue Jays have hit the Over in 26 of their last 36 against a team with a winning record and is 23-8-1 in their last 32 road games against right-handed starters.

Though Vladimir Guerrero Jr. has never faced Twins pitcher Chris Archer, the first baseman has feasted on right-handed pitchers in his career. He has a .299 batting average in his careers against righties, including 71 home runs and 228 RBI.

This season, Guerrero has a .291 batting average against right-handed pitchers, including 98 hits, 19 home runs, and 58 RBI.

Guerrero has been money against the Twins in this homestand, recording two hits in all three games. He'll more than likely get to face Archer at least twice and the signs point to him recording another hit.

The bullpen is tired and Guerrero should be able to take advantage of the middle relievers, some of whom will be pitching for the second day in a row. 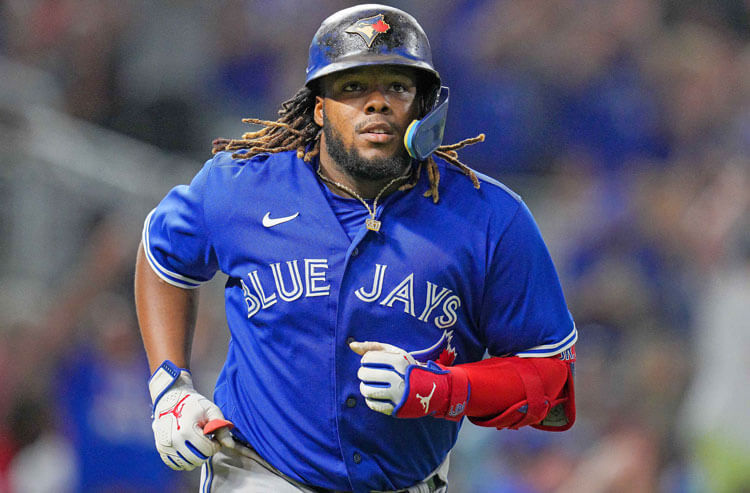