Despite the likes of Juan Soto, Mookie Betts, and more highlighting tonight's Sunday Night Baseball showdown between the Padres and Dodgers, our SNB props are targeting some unsung heroes — including Josh Bell and Will Smith — to shine in their roles.

The Los Angeles Dodgers will try for the divisional series sweep when they take on the NL West rival San Diego Padres at Dodger Stadium on Sunday night.

There’s plenty of star power to go around in this one, with Juan Soto and Manny Machado suiting up for the visitors, and Freddie Freeman and Mookie Betts playing host.

However, we’ve managed to narrow things down in the player prop market quite a bit. Here are our three favorite Sunday Night Baseball player prop picks for August 7.

MLB props for Padres vs Dodgers

Picks made on 8/07/2022 at 11:00 a.m. ET.
The odds widgets below represent the best odds currently available for each betting market at regulated sportsbooks.
Click on each pick to jump to the full analysis.

While Betts, Freeman, and Trea Turner steal the headlines, Will Smith continues to be an unsung hero for the Dodgers. He should drive at least one of them home on Sunday night.

Smith has no fewer than one RBI in six of his last nine contests, plating a total of 12 runs. Two of those runs were scored by Smith himself via the home run ball.

The Dodger backstop has five multi-hit games in that nine-game sample, so it’s not surprising to see so many crooked numbers in his RBI column as well, especially with the way his aforementioned teammates have been performing too.

Considering Smith is batting .417 over his last nine contests – with six of his 15 hits in that sample going for extra bases – an RBI looks like a solid wager at plus-money.

Gavin Lux has blossomed while receiving regular playing time with the Dodgers this year, and his fine season should continue Sunday night.

Lux has multiple hits in seven of his last 12 starts and is batting .300 over 49 at-bats since the All-Star break. He’s battled San Diego starter Yu Darvish before with solid results, going 2-for-7 with three walks.

Darvish could be in for a rough night if his most recent start against L.A. is any indication – he allowed five earned runs to the Dodgers over six frames on July 2.

The Japan native has pitched to some stark home/road splits in 2022, as opponents are hitting .172 against him at PETCO Park, but .253 everywhere else. His home and road ERAs are 2.17 and 4.50, respectively.

Oddsmakers are undervaluing Lux in this market, and wise prop players will take advantage.

Back Bell to cross the plate

Despite not getting top billing in the Juan Soto trade, Josh Bell has been a big help to the Padres’ offense since being brought in at the deadline, even when he isn’t gathering hits.

Bell has scored at least one run in each of his first four games with San Diego. That includes Saturday night when he reached base via fielder’s choice and eventually came all the way around. The Texas native has gathered three hits and four walks over his first 12 at-bats with the Friars.

Bettors should support him to record a run any way he can against Tyler Anderson, who looked off his game when last seen. The L.A. southpaw starter gave up five runs on six hits and four walks over five innings against the Giants when last seen.

Did you know that if you played today’s Sunday Night Baseball props as a parlay, you could win $74.09 on a $10 bet? 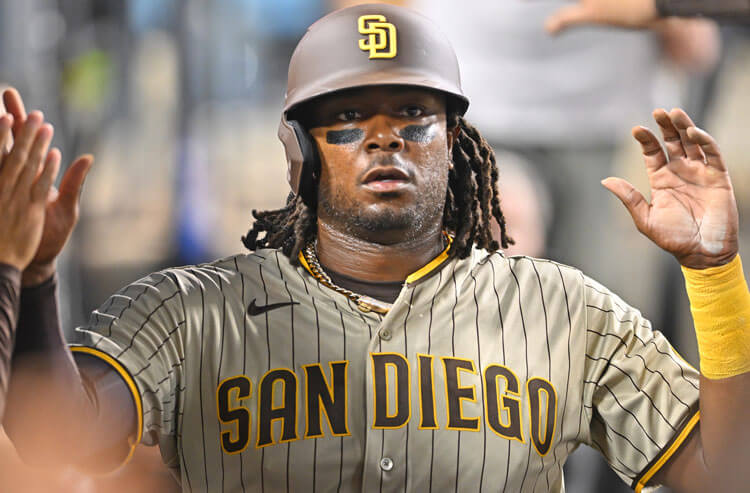