Padres vs Dodgers Picks and Predictions: Dodgers Bring Out Brooms

Despite the noise surrounding Juan Soto's arrival to San Diego, the Padres have now lost three straight games by a combined score of 23-7. Now at the risk of getting swept by the NL-best Dodgers, our MLB betting picks are fading them once more.

Baseball fans are in for a treat as this week’s Sunday Night Baseball is a fantastic matchup between the San Diego Padres and Los Angeles Dodgers — two NL West foes and two of the best teams in the league.

The Padres were riding high after acquiring superstar Juan Soto as well as other impact bats, but the Dodgers dominated the first two games of this series by a 16-4 combined score.

If San Diego wants to win it all this year, the path through the NL likely goes through Los Angeles.

Check out our MLB picks and predictions for the San Diego Padres and Los Angeles Dodgers on Sunday, August 7.

The Dodgers opened as -138 favorites. The line has come in a little bit, currently residing between -127 and -136 depending on the book. The total opened at 8.5 and has moved to 9 in some spots, although both are still available.

Tyler Anderson (12-1, 2.89 ERA): Anderson is having a career year, highlighted by his 2.89 ERA and 3.20 xERA. He doesn’t make many people whiff (20.5% strikeout rate), but pitches to contact and has allowed only a 3.7% barrel rate. He’ll need to continue keeping hitters from barrelling the ball as his profile is reliant upon that — his .264 BABIP is the lowest mark of his career by a significant margin.

The Dodgers are 15-3 in games in which Tyler Anderson starts this season. Find more MLB betting trends for Padres vs. Dodgers

The Padres seemed to have announced themselves as legitimate contenders after significantly bolstering the lineup at the trade deadline with the acquisitions of Juan Soto, Josh Bell, and Brandon Drury.

Everything was looking up and the new-look Padres won their first game together by a score of 9-1 over the Colorado Rockies, highlighted by a Drury grand slam in the first inning.

Fast forward a few days later and the honeymoon phase is over. San Diego had now dropped three straight games by a combined score of 23-7. Sunday marks Game 3 of the series, which has seen the Dodgers make a statement that they’re still the team to beat in the National League.

This pitching matchup is a close one, but Yu Darvish’s 4.50 ERA on the road is concerning. He’s still a solid pitcher, but his strikeout rate of 24.8% is the lowest of his career and a 5.7% barrel rate isn’t encouraging, either.

Tyler Anderson, meanwhile, has a terrific 2.59 ERA at Dodger Stadium this season. The Padres haven’t been great against lefties this season, ranking 19th in wOBA and 18th in wRC+. The new additions should boost that number, but the Padres still shouldn’t be considered lefty killers.

The overall lineup advantage sides with the Dodgers, who rank third in wRC+ over the last 15 days while the Padres check in at ninth.

The Padres are just 15-42 in their last 57 meetings in Los Angeles and I expect that trend to continue.

Remarkably, the Under is 7-0 in the Dodgers’ last seven during Game 3 of a series. Will that trend continue on Sunday Night Baseball?

He’s pitched twice against the Dodgers this season, allowing five earned in a loss on July 2 and tossing six innings of scoreless, one-hit ball back on April 23. He’s been pitching better of late, allowing more than three earned runs only once in his last 10 starts. As such, the Under is 12-7 in San Diego's games when Darvish is on the mound.

The Padres' new-look lineup is certainly dangerous, but it hasn’t looked that way on the field lately. This is still a talented lineup from top to bottom and Anderson’s career-low BABIP (.264) seems due for regression sooner or later. However, until we see signs of Anderson’s barrel rate (3.7%) start to drop off, he can be projected to induce soft contact.

It’s tough to take the plunge when both lineups are so dangerous, but I believe the Under is the correct side for Sunday Night Baseball.

San Diego is in real danger of getting swept.

Dodger Stadium hasn’t been kind to the Padres, who are just 15-42 in their last 57 trips to Los Angeles.

The Dodgers are 15-3 in games in which Anderson starts in 2022. There’s a nice price on their’ moneyline (-127), but the way to play the Dodgers this season has been on the run line. 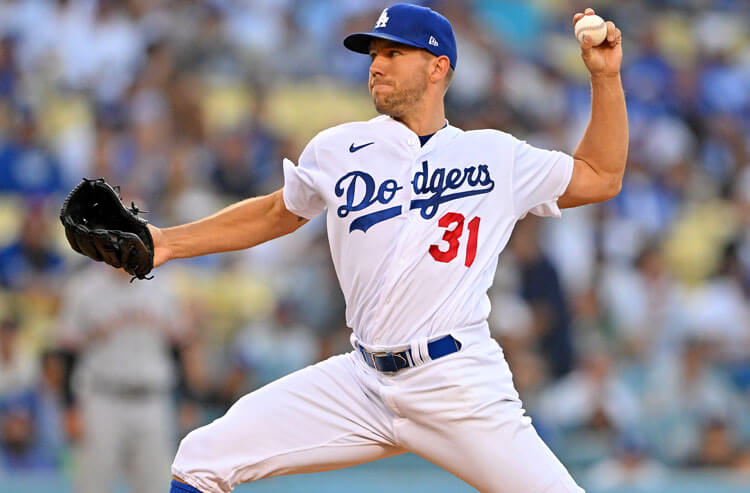 Padres vs Dodgers Picks and Predictions: Dodgers Bring Out Brooms
Provided by