Two of MLB's best teams clash in New York this week, as Houston hits the road for a date with the Mets. With uncertainty surrounding Carlos Carrasco, we're setting our sights on the Astros' bats in our MLB betting picks.

The Houston Astros and New York Mets open a two-game series on Tuesday night. The Astros are coming off a split in their four-game series against the Yankees, with both losses walk-offs. They enter this game as the -120 MLB betting favorite.

The Mets, on the other hand, have the National League’s best record and just took two out of three against their NL East rivals the Marlins.

Here are our best free Astros vs. Mets MLB picks and predictions for June 28, with the opening pitch scheduled for 7:10 p.m. ET.

Framber Valdez (7-3, 2.90 ERA): The left-hander has been outstanding for the Astros this season. In his last game against the Yankees, he had a quality start, going six innings and giving up just three runs but came away with a no-decision.

Valdez has given manager Dusty Baker incredible consistency, pitching six or more innings in each of his last 11 starts, giving up more than three runs just once over that span.

Carlos Carrasco (8-3, 4.42 ERA): Carrasco, on the contrary, has been very inconsistent. He pitched against the Astros less than a week ago and was unable to get out of the third inning due to lower-back tightness. He gave up four home runs and five earned over just 2 1-3 innings, before being pulled due to injury.

Houston is 10-4 in its last 14 road games and the Over is 6-1 in Houston’s last seven Game 1s. Find more MLB betting trends for Astros vs. Mets

Astros vs Mets picks and predictions

These two teams met less than a week ago in Houston for a mini two-game series in which the Astros took both games. Carrasco was the losing pitcher in one of those games and has given up five or more runs in two of his last three starts.

The Astros have been solid on the road, posting a 25-16 record, and they also have a 25-2 record when they score at least five runs in a game.

Despite Carrasco’s win-loss record, he has been very up-and-down this season and has been battling some lower-back tightness suffered in his last start. There are question marks on how healthy he is heading into this appearance.

Valdez has been consistently good all season and has had a quality start in each of his last 11 outings and has averaged five strikeouts per contest.

Yordan Alvarez has a .312 batting average to lead the Astros, with eight doubles and 22 home runs this season. Third baseman Alex Bregman has also stepped up his game as of late, going 11-for-33 with three home runs and seven RBI over the last 10 games.

The Over has hit four times in the last six head-to-head meetings between these two interleague opponents.

Only four Mets batters have had an at-bat against Valdez, with Mark Canha the most successful, with three hits in nine at-bats. This is a Mets offense that has scored 365 runs this season and has a team batting average of .259. They are led by Pete Alonso, who has a .281 batting average and 22 home runs to go with 69 RBI this season.

As mentioned, the Astros spanked Carrasco for four home runs in their meeting last week. As a team, the Astros are hitting .269 lifetime against the 35-year-old Mets pitcher. Jose Altuve has seen Carrasco the most with 27 lifetime at-bats, resulting in 10 hits, including one home run.

With the total set at eight runs, the number is low enough that the Astros as a team might hit the Over.

Yordan Alvarez is a threat to any right-handed pitcher, but he’s coming off a game where he hit it out of the park in both his at-bats against Carrasco. Alvarez’s total bases is set at 1.5 (-120) which means a double or home run would crush this number.

While it will be tough to replicate the same kind of success this time around, expect this Yordan Alvarez prop pick to be smashed with an extra-base hit of some kind tonight. 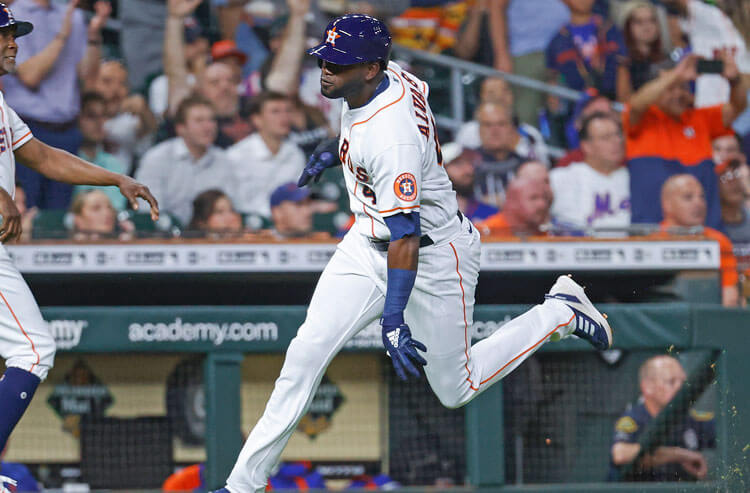