Brewers vs Rays Picks and Predictions: Baz Bounces Back for Tampa Bay

Today's matchup between Milwaukee and Tampa Bay will see two highly touted starters trying to return to form face-off. We're trusting one arm more than the other here, as we highlight in our Brewers vs. Rays MLB betting picks.

The Milwaukee Brewers (42-33) are looking to maintain control of the NL Central as they open a two-game set on the road with the Tampa Bay Rays (40-32). The Rays finished a three-game sweep over the Pirates and will look to finish their home stand strong before hitting the road for 11 games.

Tuesday's matchup will feature two highly touted arms that have struggled a bit to find their footing in 2022 when Brandon Woodruff and Shane Baz take the mound.

Who can return to form and give their team the needed boost to win Tuesday's matchup?

Continue reading for free MLB picks for the Brewers vs. Rays matchup on Tuesday,  June 28.

The odds for this matchup opened at dead even but since moved notably in favor of the Rays, who are now favorites of the -115 to -120 range at most books. The total opened at 7.0 and has largely stayed there, with some books favoring the Over with the juice and others favoring the Under.

Brewers vs Rays picks and predictions

It isn't hard to argue that Brandon Woodruff has been somewhat robbed of the spotlight given his sustained excellence over recent years. Woodruff pitched to a 3.06 ERA from 2018 to 2021 and racked up two All-Star appearances during that time, but never felt like a premier pitcher.

In his first All-Star season, the Brewers famously choked away the NL Wild Card game in the bottom of the eighth inning against the Nationals (who went on to win the World Series) after Woodruff held them to two hits, no walks, and one earned run in four innings of work.

Woodruff was essentially robbed of the opportunity to further display his dominance to a larger national crowd.

Woodruff then pitched to even better marks in 2020 (3.05 ERA vs 3.62, 0.99 WHIP vs. 1.14) yet didn't make the All-Star game nor did he appear on the final NL Cy Young vote tallies. Then, when he came back last year and pitched to a 2.56 ERA and 0.96 WHIP, he got an All-Star nod but was ultimately outshined by teammate Corbin Burnes, who took home the NL Cy Young award.

Between Burnes' continued excellence (2.41) and Eric Lauer's breakout stretch spanning from the middle of last year, Woodruff's struggles this year (4.74 ERA) have largely relegated him outside of the spotlight and possibly even out of the favor of Brewers fans. His starts no longer are must-watch occasions and are met more these days with cautious optimism at best.

Caution may be the continued theme on Tuesday, with Woodruff returning from the injured list after experiencing symptoms of Raynaud's syndrome, including numbness in his throwing hand. This came after the 29-year-old had recovered fully from an ankle sprain that originally landed him on the IL in late May. As a result, he has not pitched since May 27.

He will be facing off against Shane Baz, who recently returned from an injury of his own after being placed on the 60-day injured list to begin the season with an elbow injury. Baz has had three starts since returning, and while the first was ugly (5 ER in 2 1-3 IP) he has seemingly returned to form in the two starts since (1 ER in 10 2-3 IP).

With Baz seemingly finding his groove while Woodruff is making his first start in a month following a scary injury, there's really only one side that can be backed with confidence.

The Brewers have won seven of their last ten and it has largely come on the back of their bats heating up, averaging 5.10 runs per game during that time. That mark would lead the majors this year, just slightly edging out the Yankees (5.08).

With Baz, we have seen three starts since his return from the injured list and although the first one was rocky, his last two could be an indication of what is to come as he continues to develop as a 23-year-old highly touted prospect.

Woodruff has had more than his fair share of excellence, but he doesn't have the benefit of showing us that he can return to his pre-2022 self. He showed a glimpse of it in his two starts prior to his IL stint (3 ER in 10 IP), but that was over a month ago and it just takes one look across the mound to see how the first start returning from injury can go.

Plus, we have no idea what kind of leash Woodruff will be given and who will be called upon to make up that gap. But, what we do know is that the bullpen backing up Woodruff (3.49 ERA) isn't nearly as good as the one backing up Baz (3.05 ERA).

Backing Woodruff here is too risky of a proposition, and with both teams hitting well as of late, it's much safer to take the more reliable Baz. 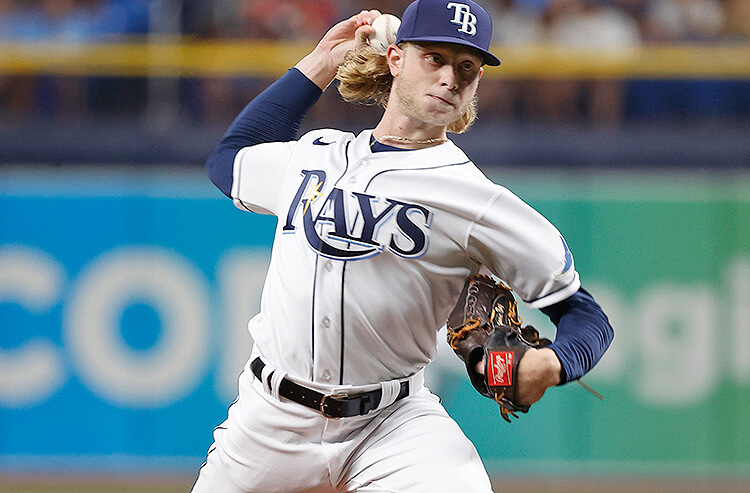 Brewers vs Rays Picks and Predictions: Baz Bounces Back for Tampa Bay
Provided by