Angels vs Rangers Picks: The Shohei Show Heads to Texas

We are getting treated to the true Shohei Ohtani experience when the Los Angeles Angels begin a three-game series with the Texas Rangers.

Ohtani takes the ball for the Angels in what will be his third start of the season and will bat second in the lineup, marking the second time this season he will hit and pitch in the same game. Does flashing all that talent make the Angels a good bet as favorites in this American League West showdown?

Check out our MLB free picks and predictions for Angels vs. Rangers on Monday, April 26, with first pitch scheduled for 8:05 p.m. ET.

Shohei Ohtani (0-0, 1.04 ERA): Straight up, Ohtani has filthy stuff. He can hit 100 on the gun with his fastball and has a disgusting splitter that gives hitters fits. The only problem is, Ohtani’s stuff may be so filthy that he can’t control it all the time. While he has racked up 14 strikeouts in just 8 2-3 innings, he also has 11 walks at the same time.

Jordan Lyles (1-1, 4.64 ERA): Lyles, on the other hand, has been solid if unspectacular for the Rangers. The right-hander owns a modest 4.64 ERA and a solid 1.13 WHIP but he's getting hit very hard. Lyles ranks in the bottom-fifth percent of MLB when it comes to opponent max exit velocity.

The temperature is expected to be 80 degrees Fahrenheit and partly sunny for first pitch, with southeast winds of 17 mph and wind gusts of 24 mph. Be sure to monitor the gametime conditions with our MLB weather info.

The Over is 4-0 in the Angels' last four games versus a team with a losing record and 4-0 in Lyles' last four starts at home. Find more MLB betting trends for Angels vs. Rangers.

This game is actually a pitching rematch from just under a week ago, a game in which Ohtani and the Angels wound up winning 6-2.

Ohtani allowed no runs on just one hit while striking out seven, but lasted just four innings thanks to surrendering six walks at the same time. Lyles, meanwhile, gave up three runs on five hits while striking out five in six innings of work.

The problem for the Rangers is if Lyles can’t go deep he then has to hand the ball to a bullpen that ranks 29th in team ERA and opponent batting average, and 26th in WHIP. They face an Angels lineup that ranks in the Top 10 in most major hitting categories, including runs per game, average, OPS, and home runs.

On top of that, both Mike Trout and Anthony Rendon are returning to the Angels lineup tonight to join Ohtani, who is up to second on the AL MVP odds board behind Trout. Ohtani’s halo will shine bright in this one as he does it all and leads the Angels to a win.

As noted, Ohtani’s biggest problem on the mound has been his control. Giving up 11 walks in under nine innings won’t be a recipe for sustained success against big-league lineups. And the struggling Rangers haven't been the worst team at the dish, either, ranking 16th in batting average and 17th in home runs.

But even if the Rangers can’t muster much off of the Halos’ two-way star they’ll get their opportunity against a bullpen that has been shaky. The Angels relievers have a combined ERA that ranks 26th in MLB, a WHIP that is 25th, and an opponent batting average that puts them at 28th.

With Ohtani not pitching more than 4 2-3 innings in a start so far this season, it’s unlikely he goes deep in this one. And with the Angels lineup capable of putting up crooked numbers in a hurry, this total is low enough to like the Over.

Did you know that if you parlayed today’s MLB Angels vs. Rangers picks, you could win $XX.XX on a $10 bet? 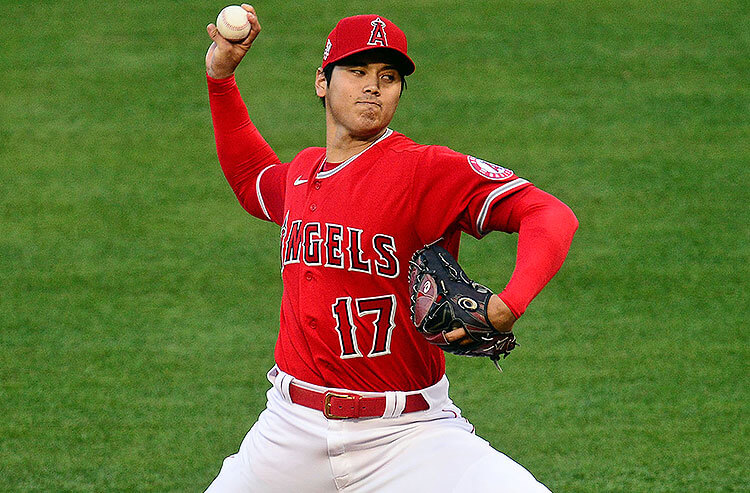 Angels vs Rangers Picks: The Shohei Show Heads to Texas
Provided by