Betting’s Racing: Why NASCAR Has Sped Into Sports Wagering — And What’s Next

NASCAR doesn’t intend to let up on the gas pedal, as the sanctioning body aims to claim a bigger share of the overall sports-wagering handle

On the track, drivers in NASCAR’s Cup Series can race each other at speeds of more than 200 miles per hour. And off the track, the National Association for Stock Car Auto Racing has been accelerating its efforts to adopt and integrate legal sports betting following a landmark 2018 decision by the Supreme Court of the United States.

To wit: NASCAR announced back in February 2020 that Penn National Gaming Inc., owner of the Barstool Sportsbook app, would be its first authorized gaming operator in the U.S., which was followed by partnerships with BetMGM and WynnBET. The National Football League, a much bigger draw for bettors, only got around to announcing its first-ever U.S. sportsbook partners in April of 2021.

Granted, the NFL has taken a pretty gradual approach to sports betting on purpose. However, NASCAR took time to prepare as well, and when it was ready, the sanctioning body began ratcheting up the tempo.

“Once legalization happened, I think NASCAR was pretty aggressive early on in embracing sports betting,” said Joseph Solosky, who stepped into the role of managing director of sports betting for the organization back in March.

Putting the hammer down

NASCAR doesn’t intend to let up on the gas pedal either, as it aims to claim a bigger share of sports betting overall. Traditionally, NASCAR has accounted for around one percent of the total handle in the U.S, Solosky said, which he’d like to double to two percent by 2022.

To get there, the organization intends to expand its betting presence in tandem with the ongoing spread of legal sports gambling in the United States. That will be paired with ongoing education about the sport and its betting intricacies, as well as research into what kind of wagering could prove most attractive.

New bettors, new fans, and new markets are all part of NASCAR’s plan to let a rising tide of legal sports betting lift all boats — and in this case, about 40 extremely fast Chevrolets, Fords, and Toyotas. Rather than trying to steal bettors away from others sports, the preference is to look at what would get new and existing punters to consider NASCAR too.

“It's kind of a cross-sport promotional strategy that we're taking,” Solosky said in a recent interview with Covers. “We're growing the pie, and hopefully growing our handle with it.”

There are a few reasons why NASCAR sees a bigger pot of money riding on races as a boost for its interests.

One likely justification is the opportunities to generate new revenue in connection with sports betting. Legalized gambling, though, also allows the sanctioning body to attract and keep a person’s attention, as having money riding on a game or race tends to do.

Solosky was one of the speakers on an online panel this past week at the SBC Digital North America conference. So too was Jeff Fernandez, vice president of business development and ventures for the NFL’s New York Jets, who said their league had taken a “measured approach by design.”

This started, like NASCAR, with ensuring the integrity of the game. It also included running focus groups and launching surveys to try to gauge what people were thinking, as the NFL decided to “take a little bit less risk, because of the long-term payoff here,” Fernandez said.

NASCAR’s plan to draw eyeballs to the sport, and to keep growing the betting pie, will continue this weekend with Sunday’s All-Star Race at Texas Motor Speedway. Kyle Larson will start from the pole position for the race, and approximately 40 percent of the handle and 25 percent of bets have been placed so far on the recent winner of back-to-back races, according to Johnny Avello, the director of race and sportsbook operations at DraftKings Inc.

Numbers from states that have legalized sports betting suggest that NASCAR has its work cut out for it to grow its share of the handle. The Virginia Lottery, for instance, reported that motorsports accounted for just 0.21 percent of total sports wagers from January through March.

Even so, Avello said DraftKings’ NASCAR handle has grown every year since the big bang of legalization in 2018, helped by the ongoing spread of government-approved sports betting and the headwind from coast-to-coast television coverage.

“Anything that's on national TV normally draws a fair amount of bets and money,” Avello said. “So that's another thing that NASCAR has going for it.”

Much like the cars racing around the track every weekend, there has been plenty of care and preparation put into NASCAR’s sports-betting push.

Solosky joined NASCAR after working at data-provider Sportradar AG. Since his start in March, he said the job has involved ensuring the organization's sports-betting partners are getting good content and support to help them attract both racing fans and “traditional stick-and-ball” sports fans. Adding new or existing betting firms to NASCAR’s roster of authorized gaming operators is something the organization is looking at as well.

Those partnerships are blossoming along with the spread of legalized sports betting, which in some cases offers a more direct way for NASCAR to participate.

As an example, Solosky said Arizona's model will essentially let NASCAR pass along a license to an operator to run a statewide mobile sportsbook on its behalf, in addition to a retail book at the organization's Phoenix Raceway. The organization is now “looking at the legislative map,” he said, and seeing how they can get involved in markets that are opening up, such as Florida.

“It’s those southern states that are definitely legalizing which we'll definitely try to capitalize on in terms of growth and promotion and brand awareness of the sport and betting on the sport,” Solosky said.

States that host NASCAR races can help give the sport's betting handle a bump, DraftKings’ Avello said, but so will the spread of legal sports betting into its most supportive markets.

“When you're in some of those states where NASCAR has a bigger presence, and the people are a little more familiar with it, those types of places will take you up a bit,” Avello said in an interview. “And as we continue to grow and get more involved with those locations down in the south, where people are more familiar with the product, I think NASCAR will continue to grow.”

At the same time, there are NASCAR fans who may be opposed to gambling on moral or other grounds, just as there are with other sports.

The organization is trying to ensure those supporters aren’t alienated by its push into legal sports betting, with Solosky saying they are taking more of a “second-screen” approach outside of the main broadcast channels.

Those efforts could be enhanced by the debut of NASCAR’s “Next Gen” car in 2022, as one popular betting market for the sport is wagering on winning vehicle manufacturers. Solosky likened the plan to ESPN’s recent launch of a “BetCast” for the NBA.

“Those are things that we're looking at doing down the line with our broadcast partners, and just independently as the sanctioning body with our Next Gen car, with potentially cameras in cars for each individual driver to have a kind of second-screen opt-in for those people who are interested,” Solosky said.

Where to from here?

NASCAR's interests run beyond the U.S. as well.

The number of international bookmakers who now offer live streams of NASCAR races (made possible via the organization's partnership with IMG ARENA) has jumped to more than 50 this year from fewer than 10 in 2020. Those viewers are tuning in to watch races for between seven and 11 minutes on average, "relatively high" for a stream, Solosky said.

One market that could be anywhere from days to months away from opening up is Canada, as a bill that would legalize single-game sports betting in the country is close to being passed by Parliament.

NASCAR currently does not run any of its Cup Series races north of the U.S. border, but it does have Canadian fans and a Canadian-based series, the NASCAR Pinty’s Series. Solosky said it was about time for NASCAR to begin speaking with the provincial lotteries and operators to ensure that betting on the sport is offered by all of their respective books.

“There will probably be a significant focus as we look forward in terms of marketing more towards Canada, especially from a betting perspective,” he said.

Offerings to come include a NASCAR-branded "virtual sports game" launching later this summer, Solosky said, similar to historical horse racing in how it will work. The game could be offered by operators in states where randomized number products are allowed under internet gaming laws, such as Michigan and New Jersey.

And then there’s the lift NASCAR has been getting from in-race betting. Solosky said some of the organization's gaming operators saw nearly as much wagering on the 2021 Daytona 500 as they did for all of NASCAR in 2020. That increased action was partly due to the launch of an in-race market with betting odds, which was powered by the sport’s data partner, Genius Sports Group.

NASCAR is looking to keep improving and growing those in-race betting markets, giving its drive for a greater share of the sports-wagering handle a bit more gas.

“The future of sports wagering is the in-game,” DraftKings’ Avello said. “And in-game continues to grow on all sports, and it will continue to grow on NASCAR as well.” 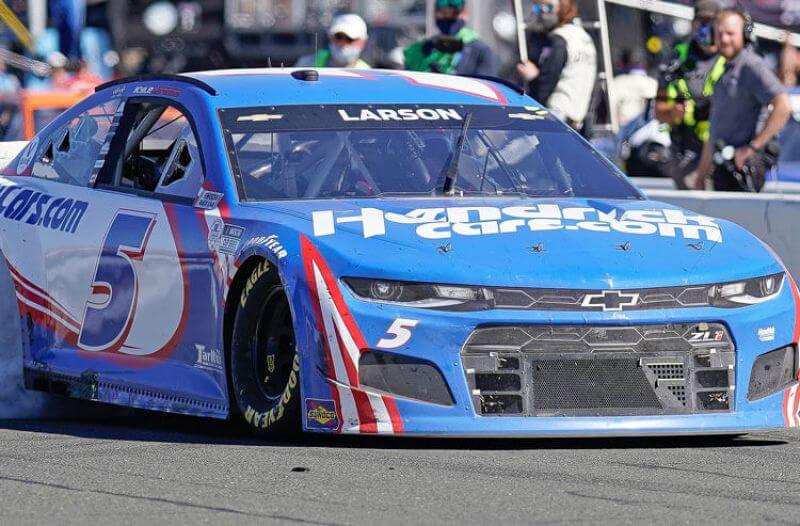 Betting’s Racing: Why NASCAR Has Sped Into Sports Wagering — And What’s Next
Provided by