After missing out on a spot in Russia in 2018, the USMNT have qualified for the 2022 World Cup in Qatar. With the tournament just five months away, we're bringing you an early look at the USMNT roster and World Cup odds.

The United States, drawn against England, Wales, and Iran in the competition, must navigate a trio of matches against strong opposition in order to qualify for the knockout stages of the World Cup.

After watching from home in 2018, the USMNT was overhauled and now features a crop of promising young talent that manager Gregg Berhalter is still trying to figure out. While the 2026 tournament, hosted on home soil, is what most fans of the USMNT are pointing to, there’s an expectation to at least play in a fourth match this time around.

Let’s see how likely that is to happen, as we break down the USMNT’s roster and World Cup odds heading into Qatar.

The USMNT’s hopes for advancement start and end with the forwards, in particular, Chelsea winger Christian Pulisic. The face of the national team will be expected to step up on the world’s biggest stage, with the opposite wing likely manned by Leeds’ Brenden Aaronson, Timothy Weah of Lille, or Borussia Dortmund’s oft-injured Gio Reyna.

Pulisic, and whoever partners with him on the other wing, will likely see a rotating cast of strikers in their group stage matches. Despite numerous players being given opportunities to secure the job, nobody has taken the chance to do so.

Berhalter has stated he will go with whoever is in the best form, which could be any one of a group including Ricardo Pepi, Jesus Ferreira, Jordan Morris, Daryl Dike, Josh Sargent, Jordan Pefok, or Haji Wright.

Right now, the most likely choice is Ferreira, with the FC Dallas forward in decent form, but a lot can change over the next five months.

In a tournament where goals can be tough to come by as teams seek to not lose, their hopes could ride simply on whether someone can step up when needed most.

Barring injuries, two of the three midfield spots for the USMNT are written in pen.

Juventus box-to-box midfielder Weston McKennie will partner with Tyler Adams of RB Leipzig, who will hold at the base of the midfield and perform much of the defensive ball-winning responsibilities.

As for who will partner them, Berhalter will likely rotate between the probable starter, Yunus Musah of Valencia, and Kellyn Acosta of LAFC, who would also be Adams’ primary backup.

The depth of the midfield provides plenty of options for tactical adjustments, as well. Between Seattle’s Cristian Roldan, Sebastian Lletget of New England, Luca de la Torre of Heracles, and Venezia’s Gianluca Busio, Berhalter has plenty of options.

Furthermore, Aaronson has shown in the past international window that he can play in a more advanced central role, potentially allowing for a 4-2-3-1 setup. Busio could also fill this role, with his set-piece prowess providing an additional threat.

A promising center-back partnership was building between Nashville defender Walker Zimmerman and Atlanta’s Miles Robinson, but a torn Achilles suffered by the latter in early May put Berhalter back at square one.

While many have called for John Brooks to return to the roster, it appears the job will be Aaron Long’s to lose, with the Red Bulls’ defender performing well in recent matches.

Cameron Carter-Vickers of Celtic, Erik Palmer-Brown of Troyes, and Chris Richards of Bayern Munich are expected to deputize.

At fullback, there is serious talent on both sides, but a concerning lack of depth. Sergino Dest of Barcelona will patrol the right — if healthy — while Antonee Robinson of Fulham has locked down the left.

Veteran DeAndre Yedlin of Inter Miami and the versatile Reggie Cannon of Boavista will provide depth at either side, although both are much better suited to play on the right.

The biggest question mark for the squad, outside of striker, comes in goal. Any one of four players could be considered to start as of now: Arsenal’s Matt Turner, Manchester City keeper Zach Steffen, Sean Johnson of NYCFC, and Ethan Horvath of Nottingham Forest.

All but Johnson enter this upcoming season as backups, with Berhalter stating he will go with whoever the hot hand is. While Horvath is pushing for a transfer if he isn’t named the starter, this could be Johnson’s job by default come November.

This is not going to be an easy group to escape from. Iran are no pushover, and Wales is motivated by their first appearance in the World Cup since 1958. England are the favorites and rightly so, given their depth of talent and their runner-up finish at Euro 2020. After that, it’s anybody’s spot to claim.

In the latest Elo ratings, Wales ranks 23rd with the United States and Iran coming in at the next two positions.

All that said, it would be a disappointment for the Yanks to head home before the knockout rounds. Their opener with Wales should be an emotional match for both sides, but a draw is more than attainable.

Getting England in the second match allows them to potentially see a partially rotated side, and a result is more than possible.

Taking at least a point from the opening two matches puts them in a difficult position with a must-win against Iran, but a pair of draws or a win means victory all but ensures advancement.

Iran’s lack of depth will be their downfall in the final match, as the USMNT moves on to the Round of 16.

PICK: USA to qualify from group (+125 at DraftKings) 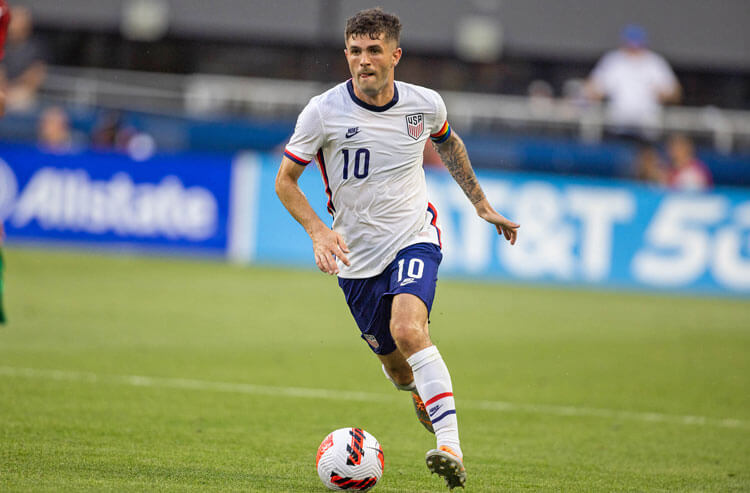