Although Portugal is coming off a loss to South Korea, they are a superior team to Switzerland and should be able to grind out a win on Tuesday. Read more about why our World Cup picks are taking the Portugese in a low-scoring affair. 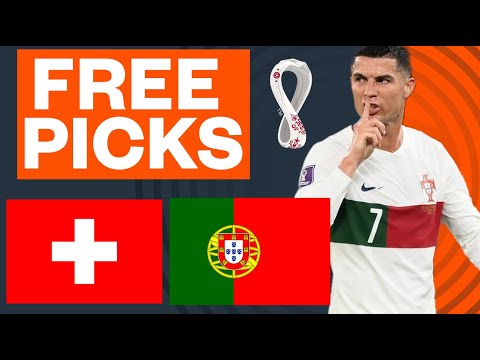 On Tuesday, we get Portugal vs. Switzerland, the final game in this World Cup’s Round of 16. The winner of this clash will meet the winner of Morocco vs. Spain in the quarterfinals.

World Cup odds are making Portugal favorites for this match, but could the Swiss upset Cristiano Ronaldo’s team?

Don’t miss our World Cup picks and predictions for Portland vs. Switzerland on December 6.

Portugal vs Switzerland picks and predictions

Portugal comes into this game as favorites with Cristiano Ronaldo as their flagship player, but they face a Swizz team who are well-drilled and brilliantly organized.

Portugal topped Group H, as they won their opener 3-2 over Ghana and beat Uruguay 2-0. Despite suffering a last-minute loss to South Korea in the final game, it's worth noting that the final game saw them already qualified and rotating the bulk of their players.

Switzerland got here by finishing second to Brazil in Group G. They beat Cameroon 1-0 in the opener before losing to Brazil by the same scoreline, and then defeated Serbia 3-2 to grab that second spot.

This game at Lusail Stadium is going to be a tight one, and Portugal will struggle to break down Switzerland, who have been strong at the back for most of the tournament. This includes that game against Brazil, where they shut out the World Cup favorites for most of the game.

The Swiss are better than anybody Portugal has played so far, and it’ll be a good test of where this team is. Switzerland aren’t stacked with great players, but they’re solid and methodical.

Switzerland will sit back and look to hit the Portuguese on the counter, and as mentioned, they’ll be hard to break down. I’m still not convinced that Portugal wouldn’t be better with Ronaldo on the bench, but it won’t happen. This is one of those games that I expect to be low-scoring and most likely a tie at halftime before Portugal manages to showcase their superior quality and get a late win.

A) Cristiano Ronaldo to score from outside the box BOOSTED to +1,400 at bet365! Bet Now

Portugal vs Switzerland side analysis

Portugal manager Fernando Santos seems intent on playing Ronaldo and Joao Felix up front, despite the Atletico Madrid man looking far from his best so far. The key to the team is Bruno Fernandes, who has played at an elite level and looks like the team’s most important player, rather than his former Man United teammate Ronaldo.

The midfield is a tandem with Rube Neves and William Carvalho shielding and allowing Bernardo Silva to sit deep and orchestrate play from there. Pepe has played at the back for Portugal’s past two games, and if he’s selected, the 39-year-old could be the weak link that Switzerland targets.

Breel Emolo has scored two goals so far in this World Cup, and he is the biggest danger for Portugal. Elsewhere, the household names of Granit Xhaka and Xherdan Shaqiri are important to the team, as is Xhaka’s central midfield partner Remo Freuler.

The big question for Switzerland is whether they have the creativity or X-factor to put Portugal to the sword, and I don’t think they do.

If Switzerland can keep the score to just 1-0 against Brazil, then there’s no reason we can’t see similar here. This is especially the case if they avoid conceding early.