In Lionel Messi's possible final crack at World Cup glory, he will be looking to secure his legacy as possibly the greatest Argentina has ever seen. As winning the group stage is a foregone conclusion, the question is who will join them in the Round of 16. 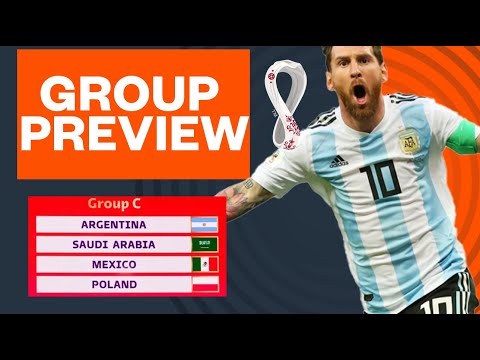 When you discuss Group C at the 2022 World Cup in Qatar, there’s one name that immediately comes to everyone’s lips — and that’s Lionel Messi. In what might be his final tournament suiting up for La Albiceleste, the 35-year-old forward looks to cement his legacy with the one trophy that has eluded him in his career.

But the story of Group C goes beyond just the second favorite to win the tournament, according to World Cup odds. While two proud nations in Mexico and Poland hope to advance alongside the favorites, the underdog Saudi Arabians hope their familiarity with one another and their proximity to home will help them surprise everyone.

We break down the teams and their chances with our World Cup Group C odds, predictions, and betting preview. And don't forget to check out our free World Cup picks page as we progress through the tournament.

Argentina hope their run of heartbreaks is at an end, buoyed by their win at Copa America 2021 in which Messi won his first major international title. They’re closing in on Italy’s record unbeaten streak, having gone 35 straight matches without tasting defeat, and only Brazil have shorter odds to lift the trophy.

While Messi undoubtedly gets the attention, this team has star power and depth at nearly every position. Juventus winger Angel di Maria appears to have won his race to be fit in time for the tournament, and the two will be joined in attack by Inter Milan striker Lautaro Martinez in a 4-3-3 setup.

The midfield will be controlled by Rodrigo de Paul of Atletico Madrid and Giovani Lo Celso of Villareal, and the back line will see in-form Manchester United defender Lisandro Martinez partnering with fellow Premier League center-back Cristian Romero of Spurs.

Argentina have few weaknesses, and there will be plenty of sides that challenge them in this tournament, but that won’t happen in the group stage. Look for the South American side to roll through this group, possibly taking all nine points with a style of football that is beautiful to watch and scary to try to stop.

Player to watch: Lionel Messi. The obvious answer isn’t always the wrong answer, and Messi knows this is his chance to secure his legacy. If he wants to unseat Diego Maradona as the greatest Argentinian player to ever lace up his boots, he knows he needs to match the icon with a World Cup victory.

For a long time, Mexico have dealt with the whispers of “quinto partido” due to their consistent failures in the World Cup Round of 16. Getting out of the group stage has been the norm for El Tri, but finding a way to reach the quarterfinals has eluded them as they’ve fallen just short in seven consecutive World Cups.

That streak could end this year — but not in the way that Tata Martino’s side would like. Mexico must first find a way to escape the group stage, which won’t be easy given the run of form they’ve been in this year. Mexico have won just three of their last nine matches stretching back to August of 2021, with four defeats in that span.

Scoring goals has been a real problem, as Mexico have been held scoreless five times in that stretch. They scored just nine goals, with four of them coming in a friendly win over Iraq this past week. Injuries are also a concern, with Wolves striker Raul Jimenez in the squad but unlikely to be fit enough to be a factor. The loss of Jesus Corona was also a massive blow, as Tecacito was arguably their best creative player. The roster release on Monday evening also saw LAFC star Carlos Vela left off the roster in a shocking move.

That leaves it in the hands of Hirving “Chucky” Lozano and veteran midfielder Hector Herrera. The Houston Dynamo midfielder will anchor the midfield along with Edson Alvarez in a 4-3-3 formation, while Napoli winger Lozano will be the player Mexico will rely on to put pressure on defenses. If he’s unable to do so, it could be El Tri and out for Mexico.

Player to watch: Chucky Lozano. By far their most explosive player on the roster, the 27-year-old has four goals and three assists this season for Napoli. He’s an explosive player with excellent dribbling skills, but he will need to be a source of goals if Mexico are to advance.

For all the success he has had in European club football, international success has long eluded Robert Lewandowski. The Barcelona striker has been one of the most lethal finishers in the world over the past few years, and his 74 goals in 134 national team appearances are the most all-time for Poland.

Unfortunately, there have been far too many times where Lewandowski has cut a lone figure at the top, desperate for service from his teammates that never arrives. But perhaps that is changing, and this is a group that sets up nicely for the Poles. Midfielder Piotr Zielinski is in stellar form at the moment, a key figure for a Napoli side running rampant in Italy and Europe.

The two will have plenty of help in their 4-1-4-1 setup, starting with a strong defense featuring Aston Villa teammates Matty Cash and Jan Bednarek. In their 11 World Cup qualifying matches, the Poles allowed just 11 goals while keeping four clean sheets.

Lewandowski also has help in the attack, with Karol Swiderski having a strong season in MLS for Charlotte. Swiderski scored five of Poland’s 33 goals during their World Cup qualification run, which saw them win seven of their 11 matches.

Poland were tested in the run-up to the World Cup as they faced fellow tournament sides Belgium, Wales, and the Netherlands in the Nations League. They won twice against Wales and were competitive in all but one of the six matches. That experience should help them quite a bit, as they seek to reach the knockout rounds for the first time since 1986.

Player to watch: Piotr Zielinski. The Napoli midfielder has six goals and seven assists in all competitions for his club side this season and has been one of their most important players. If that form can carry over into the tournament, it would likely be the key Poland needs to unlock Lewandowski’s full abilities in attack.

Fans of the US Men’s National Team will know how frustrating the Saudis can be. Their September friendly saw the scoreline end in a 0-0 draw, as the Yanks managed just two shots on target in the entire match.

They’re a stingy team defensively, and they’ve allowed just four goals in nine matches during the 2022 calendar year. While many of those fixtures came against low-ranked opposition, they’ve shown they can stifle attacks for national teams like Colombia and Ecuador as well.

Part of their success stems from the fact that, unlike most national teams, their players play together quite often because most of them play in the Saudi league. Herve Renard’s side features a large number of players from club side Al Hilal, which could prove huge in a tournament where they will want to absorb pressure and try to hit on the break.

When they do launch forward in their 4-3-3 setup, Salem Al-Dawsari is who they will be looking for. His 18 goals for Al Hilal were a career-high, and he scored seven times during Saudi Arabia’s World Cup qualifying run. The winger will hope to have help from striker Saleh Al Shehri, whose status for the tournament isn’t fully known as he comes back from injury.

While their odds of advancing are quite slim, Saudi Arabia could very well determine who finishes second in this group. If they can frustrate one of the sides in this group enough to secure a draw — or even a stolen win — it could prove costly for their opponent’s qualification hopes.

Player to watch: Salem Al-Dawsari. With 17 goals in 70 appearances for the national team, the 31-year-old forward has nearly twice as many international goals as anybody else on the team. His 18 goals in league play this year more than doubled his previous high, and his 95th-minute goal against Egypt in the 2018 World Cup gave them their only victory of the tournament.

This one isn’t that difficult for me. If Mexico were healthy, I’d have them making the Round of 16 yet again. But the injuries to Jimenez and Corona will be too much to overcome for a team that was already struggling to score goals during World Cup qualifying.

Argentina are going to win the group, and there’s little doubt about that. They’re one of the most well-balanced teams in the entire tournament, they have the depth to rotate whenever needed, and Messi will be driven to win a World Cup in what could be his final attempt.

I was tempted to pick them to go perfect in the group stage, but I worry their third match in the group against Poland could see them resting players with the group in hand. That situation would help Poland to likely get at least a point.

Given Poland should get a win against the Saudis, they’d need just a win over Mexico or a result against El Tri and Argentina to secure advancement. Lewandowski finally delivers on the big stage and the Poles finish second in the group and advance to the knockout stage.