With the 2022 World Cup just months away, defending champion France trail the tournament's most successful team, Brazil, on the odds board — with the most recent Euro champs (Italy) eliminated again. Here are the latest odds to win the World Cup.

A number of the usual favorites sit atop the odds board, but World Cup odds saw some movement after the most recent Euro Cup champions — Italy — were eliminated from their second straight World Cup.

Led by Neymar, Vinicius Jr., and featuring a star-studded supporting cast, Brazil are the favorite to win the 2022 World Cup and extend their record of five tournament victories. They were drawn into Group G, joined by Serbia, Cameroon, and Switzerland.

The reigning World Cup champions chase Brazil atop the odds board. Les Bleus are coming off a disappointing Euros, which saw them blow a 3-1 lead in the final 10 minutes and lose to Switzerland in penalties in the quarterfinals, but they still have, by far, the most talent in the world and should be expected to fiercely defend their title in 2022. They were drawn into Group D with Denmark, Tunisia, and a still to be decided spot.

Despite losing in the 2020 Euro finals on penalty kicks, England are right there with France on the World Cup odds board. England have a young generation of talented attackers coming through the ranks, so the Three Lions should be expected to contend at many tournaments to come. They've secured a place at the World Cup already and will bring a combination of experience, with a semifinal and final in consecutive major tournaments, and young talent to Qatar.

2020 Euro semifinalists Spain are no surprise near the top of the odds board, as a perennial powerhouse, relatively recently removed from their own World Cup title (2010). Spain won their qualification group, and field a roster chocked full of La Liga teammates to galvanize one of the world's most talented rosters with a bit of extra chemistry.

Odds to win Group A

Odds to win Group B

Past winners of the FIFA World Cup

Betting on the outright winner of the FIFA World Cup is an extremely popular futures betting option and odds usually come out soon after the previous World Cup winner is crowned. These odds will adjust based on how countries and players perform leading up to the World Cup. Sportsbooks will also adjust the soccer odds based on handle and liability with certain nations.

Futures odds are displayed in list form, showing each option and its odds – most often ranked from best chances to win to worst. You will usually see a plus (+) sign in front of a team's futures odds, like this:

This means that on a $100 bet, you would stand to win $500 if France won the World Cup. As we get closer to the World Cup final or if one team has been extremely dominant, you might see a country with a minus sign (-) ahead of its odds.

Above we have posted the American odds for the FIFA World Cup. However, these are easy to convert to decimal odds or fractional odds with our odds converter tool.

Brazil and France have maintained co-favorite status for several months, with England and Spain close behind them.

Brazil have won the most World Cups, with five, while Italy and Germany follow with four wins each. 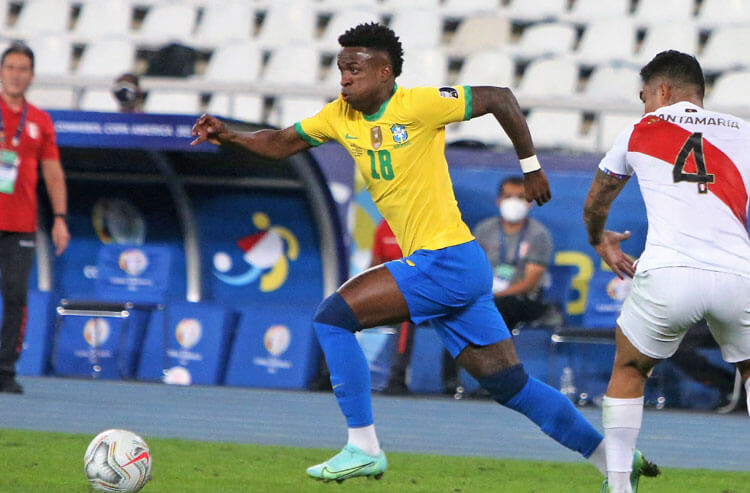