Portugal vs Germany Euro 2020 Tips and Predictions: On the Brink

Portugal finally broke Hungary down after 80 minutes in their opening match of the Euros and now get a tougher test with Germany. Can the defending champs stay perfect? Check out our tips and predictions.

Group of Death play continues on Saturday, with the best saved for last in the second matchday for Group F.

Group leaders and defending Euro champions Portugal will try to remain perfect through two matches but will get a tough test, as they head to Munich to face Germany.

Can Germany get on the board at this year's tournament? Keep reading for our Portugal vs. Germany tips and predictions.

The middle of Saturday's three matches should be much more competitive than the two matches around it. Germany is a +130 favorite at The SuperBook, with Portugal +220 and Draw +230 as of 11:30 p.m. ET Friday night. "Good money on all sides of the three-way market to this point, with Portugal getting a couple of sharp bets. And from people I talk to, they seem the sharp side." The total is at 2.5 (Under -125), and Beyers said there's "no interest" in that market at this point.

After a clear, sunny day in Munich on Saturday, clouds will roll in with scattered thunderstorms in the forecast, and a 50 chance of precipitation. Temperatures at kickoff are expected to be around 85 degrees Fahrenheit.

Despite dominating play against Hungary, Portugal were held out by their resolute opponents for a large portion of their Euro-opening game. With Bruno Fernandes struggling against a swamped midfield and striker Diogo Jota putting in a wasteful performance, it appeared as though Portugal would get just a single point. Then, Rafa Silva came on and changed everything.

In just 20 minutes, Silva had a deflected cross fall perfectly for Raphael Guerreiro's opening goal, was fouled to give Cristiano Ronaldo his chance from the spot which was converted, then linked up with Ronaldo for his second. Not only did Silva give Portugal a spark, however, but he enabled Ronaldo to be shifted back to the wing, where he thrived.

Portugal's adjustment against Hungary, as well as the impact of their options off the bench, is in sharp contrast to a Germany side sticking with a 3-4-3 formation that hasn't worked and turning to snakebitten forward Timo Werner as a substitute. Worse still, Germany's setup sees their best and most important player, Joshua Kimmich, moved out wide instead of in the center of the park. Kimmich is less effective playing as a right wingback but he'll get the toughest task on Saturday, with Ronaldo's move to the left likely to be repeated in this match.

Germany have not impressed against quality opposition in over a year, as they have been hammered at home by the Netherlands, drew with Denmark ahead of the Euros, and soundly handled by France. (That's without getting into a home defeat against North Macedonia in World Cup qualifiers.) Portugal, on the other hand, have continued to perform as one of the world's best and most complete sides, with world-class players in defense, midfield, and attack.

For as much as they controlled their game against Hungary, Portugal are still a side that prefers to defend deep and use rapid passing movements and counter attacks to create scoring opportunities. While they have the talent at the back and in attack to get by doing so, it can lead to games being tighter than expected — like the first 80 minutes against Hungary. That was also on display in their victorious Euro campaign of 2016, during which Portugal drew all three group stage games and won only one game in 90 minutes.

Like most of the team, Germany are in a bit of a transitional phase in attack. While Thomas Muller's recall to the national team gives them an experienced player up top and Serge Gnabry has delivered consistently at international level, the rest of the attackers are very young and likely, another tournament away from having a large impact.

Kai Havertz was Germany's most dangerous player against France, but he is coming off an up-and-down debut season in the Premier League. Leroy Sane and Werner did little off the bench, while young star Jamal Musiala didn't even make the matchday squad.

If Portugal has it their way in this one, which we expect them to do, they will keep things tight in a victory, while stopping Germany from creating anything going forward. 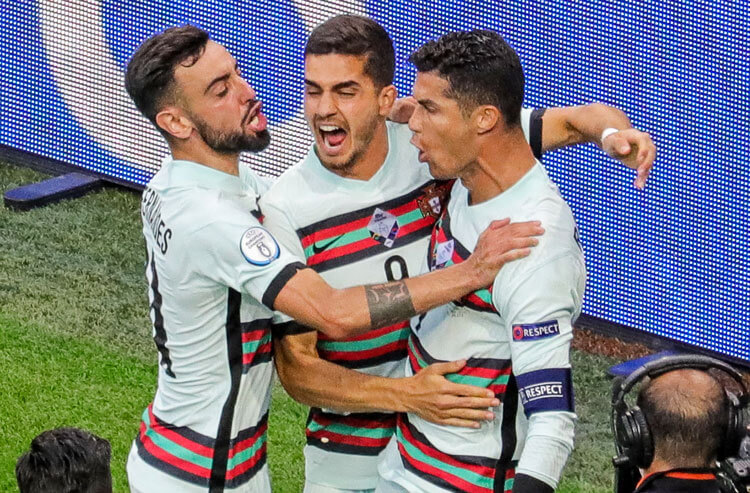 Portugal vs Germany Euro 2020 Tips and Predictions: On the Brink
Provided by