Hungary vs France Euro 2020 Tips and Predictions: Kylian Them With Pace

Kylian Mbappe was unlucky not to get on the scoresheet in France's opening game of the Euros, but he'll have ample opportunity against underdogs Hungary. Can Mbappe open his account with a goal? Check out our Hungary vs. France tips and predictions.

Hungary, fresh off a 3-0 loss to Portugal, won't get any rest in matchday two for Group F as they now welcome World Cup holders France to Budapest.

France earned an impressive opening win at the Euros against Germany in Munich and can punch their ticket to the Round of 16 with another three points. Read on for our Hungary vs. France tips and predictions.

Late Friday night, The SuperBook at Westgate has Saturday's first match at a lopsided France -340/Hungary +1,025/Draw +440. "No one is interested in Hungary. I'm not exaggerating when I say that," SuperBook risk manager Rex Beyers said, while noting France is getting the bulk of moneyline play, but even that's limited at such a heavy price. So customers are looking elsewhere. "Most of the money is on France in the -1.5 market," Beyers said, noting the French are a much friendlier -110 laying 1.5 goals. The total is at 2.5 flat (-110), and Beyers said there's "no interest" in that market as of 11:30 p.m. ET.

France and Hungary will have great conditions for their Euro group stage match on Saturday, with temperatures expected around 90 degrees Fahrenheit.

The reigning World Cup champions went into Munich in the first matchday and, despite coming away just 1-0 winners, resembled the same France team that achieved glory in Russia three years ago. As so often happens, N'Golo Kante brought out the best in Paul Pogba in midfield, they defended with great intensity, and their breakneck counter, with lethal outlets in Kylian Mbappe and Antoine Griezmann, punished Germany.

Mbappe was unlucky not to come away with multiple goals, with one ruled out to an offside and another great chance just stopped by a questionable last-ditch tackle. Another near goalscorer, Karim Benzema, reentered the French team seamlessly, with his movement working in great unison with Mbappe and Griezmann, just as it did with Cristiano Ronaldo and a collection of wingers at Real Madrid over the years.

Hungary did an outstanding job of keeping Portugal out for the better part of 90 minutes in their opening match until they were eventually broken down and then picked apart. Against France, we'll see a similar tactical setup, with a back five and one of the forwards dropping into midfield out of possession, to give them a midfield four. That setup did a superb job of crowding Portugal talisman Bruno Fernandes out in midfield, but it'll be a different test against Pogba.

Part of Pogba's success with France, especially compared to his play at club level, is the way France play him on the outside of a midfield three. With Kante in the middle, Pogba is able to drift wide, find space and, usually, pick out lethal passes. If Hungary commit numbers to Pogba when he drifts wide, it will simply open space for any number of threats in the French side.

Hungary may put up another admirable fight, but this one won't ever be in doubt.

One of the defining moments of the 2018 World Cup was Mbappe's driving run against Argentina, going from penalty area to penalty area through a helpless ocean of blue and white shirts. We nearly got a repeat of that against Germany, as Mbappe torched Mats Hummels with a ridiculous turn of pace. The ascending superstar's barging runs into space remain the most terrifying sight, for an opponent, in the sport.

Between that run and a fantastic individual goal wiped off due to offside, Mbappe was the most threatening player on the field in a game overflowing with world-class players. Against an overmatched Hungary side, Mbappe can once again thrill in attack and this time, come away with a goal to show for it. 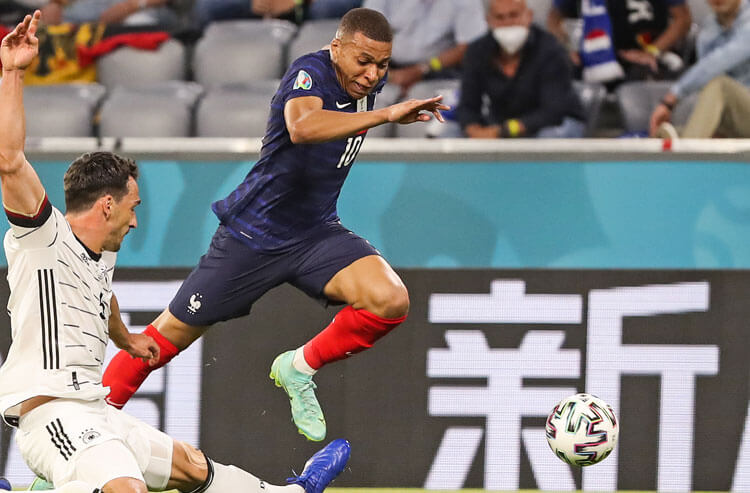 Hungary vs France Euro 2020 Tips and Predictions: Kylian Them With Pace
Provided by