England vs Germany Picks and Predictions: Back Another Slow Start

Don't expect much scoring when England and Germany renew their heated rivalry on Monday. Both teams are feeling the pressure ahead of the the World Cup and will do everything in their power to avoid conceding goals in their final tune-up.

There aren’t many games in international soccer which get the blood pumping like England vs. Germany. It may be the Nations League that they’re competing in, but make no mistake, this is all about the World Cup.

Who will win this emotionally-charged World Cup warm-up? Don’t miss our England vs. Germany tips and predictions to find out.

England vs Germany picks and predictions

Monday sees England welcome Germany to Wembley with both teams under pressure. This, the 35th meeting between the two old enemies, comes at a time when neither team is playing well, which is a cause for concern ahead of the World Cup in November.

This match in Group 3 of UEFA Nations League A is effectively pointless. England cannot finish above bottom and will be relegated, while Germany cannot win the group. In truth, these games have never really been about glory, and have always been about preparing for the World Cup in Qatar.

Both England and Germany come into this after poor results on Friday. England lost 1-0 on the road to Italy, with Germany losing 1-0 at home to Hungary. Both teams would, and should, have expected better.

When it comes to betting the game it’s tough to pick a winning side but there are still some interesting betting angles that we can play. The best bet of the day is backing the correct score at halftime to be 0-0 at +162.

Of England’s past five games, all of which were in this competition, four have been scoreless at halftime. The lack of goals and attacking intent has been a stick used to beat Gareth Southgate with and it’s something we can use to our advantage here.

Indeed, when these two met in Munich in June the score was 0-0 at halftime, with the game going on to finish 1-1. The pressure has been growing on both teams and there was even vocal displeasure from the fans towards Southgate at recent games. With this being the final game before the players travel to the World Cup you’d think both managers will be focused on ensuring they avoid defeat.

I’m expecting a careful approach from both teams in the opening 45 minutes, with them getting more adventurous in the second half. You can get a tasty +162 on the 0-0 at halftime and it’s well worth taking.

Both teams played strong games in their defeats on Friday. Harry Kane, Raheem Sterling and Declan Rice played the full 90 minutes, as did everyone but Kyle Walker and Bukayo Saka. Besides Nick Pope, who was starting due to an injury to Jordan Pickford, and Saka at LWB I’d see this as what Southgate views as England’s best team.

He selected 28 players for this camp and with big names playing the full 90 I’d expect to see some, if not a lot, of rotation on Monday. You’d have to think that Ivan Toney would get a chance to start up top and make his debut, and those who didn’t even make the bench, like Ben Chilwell and Marc Guehi, to join him.

Germany will likely make changes too with the likes of Kai Havertz and Jamal Musiala starting on the bench on Friday. The question is whether they’ll persist with Timo Werner through the middle or look to try something different.

Of the two managers, Gareth Southgate and Hansi Flick, it’s Southgate who is under the most pressure. He won’t get sacked this close to a World Cup but the atmosphere will be toxic at Wembley if England don’t play well. For that reason I’d expect England to be most likely to grab the win, and the team's performance may show us what the players think of their manager. With the World Cup starting within two months it’s essential that neither team plays badly here.

The Under is as short as -143 for England vs. Germany, and in truth that could still offer good value. Only one of Germany’s past seven games have seen three or more goals, a 5-2 thrashing of Italy.

Things aren’t much better for England, with just one in five going Over, a 4-0 loss to Hungary. However, England had been high-scoring if you look back before that run. In the six games before that, they failed to go Over 2.5 just once and scored 26 times in those six games alone.

With neither team wanting to lose this it should be low scoring, although there’s always a chance that we do see goals. I’d probably avoid betting on this market personally, but Under 2.5 is the way I’d lean.

The weather will be around 55 degrees when this game kicks off on Monday, with rain expected. 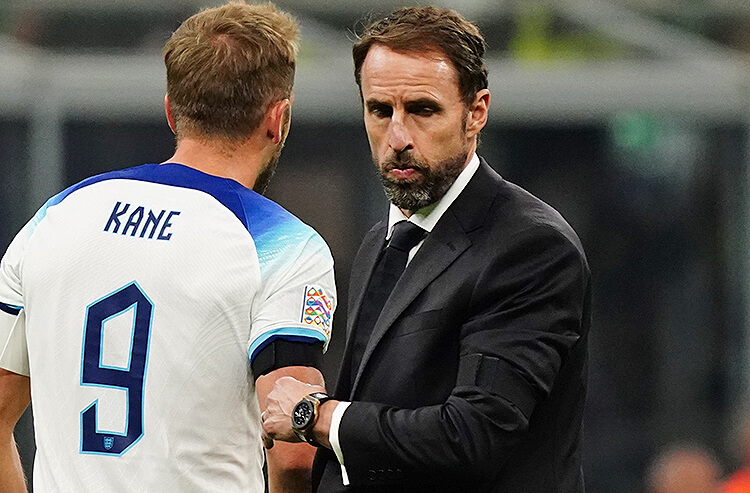 England vs Germany Picks and Predictions: Back Another Slow Start
Provided by

Argentina vs Australia World Cup Picks and Predictions: Under-whelming in Round of 16
Tom Oldfield | Dec 2, 2022