Australia vs USA Olympic Soccer Tips and Predictions: USWNT Need to Finish On a High Note

A changing of the guard is coming for the aging USWNT core, which is disappointed to be playing for bronze in the 2020 Tokyo Olympics. But they're going to go out with a bang, as we expect them to put on a show in their Olympic finale against Australia.

The USWNT find themselves in unusual territory as they compete for third place at the 2020 Olympic Games.

Can the USA finish on a high against Australia, after an up-and-down campaign that saw them eliminated in the semi-finals by a gutsy Canadian team?

Get our thoughts in our Olympic soccer betting picks and predictions for Australia vs. USA on Thursday, August 5.

The game will take place late in the afternoon in Tokyo, with temperatures expected around 90 degrees Fahrenheit at kickoff. Mild wind should give us great conditions for the game.

It’s the game that they didn’t want to be part of. With everything that this USA team has achieved throughout the past few years, they’ll be very disappointed to be left to compete in the Bronze Medal match at the Olympic Games — but you’d be fully expecting them to want to prove their doubters wrong and win.

Olympic odds have the USA are heavy favorites at -138 to beat Australia, which is totally understandable when you compare their squad with that of the Matildas. It feels like this USA team could be at a crossroads, with a need to inject some new blood now that some of their most famous names are comfortably in their thirties.

There will be a changing of the guard but you’d have to imagine that the established stars will start in this game with the team resisting any temptation to use the depth on their bench.

Against Canada, we saw a team that looked disjointed: capable of some brilliant attacking movements but also weak at the back. The older stars still have much to offer, as 36-year old Megan Rapinoe looked good when she came on for the final thirty minutes, with her delivery from out wide creating a great chance in extra time.

For all the criticism of the refereeing decision which gave Canada their winning penalty, it was ultimately a fair call and was another example of some thoughtless defending, which we’ve seen far too often in this tournament.

Australia isn't exactly a pushover either, as it drew 0-0 with the USWNT earlier in the tournament. That game was the only match in which they didn’t concede a goal and the nine goals conceded in five games show its main weakness — which is at the back.

Canada’s game-plan worked perfectly against the USA, soaking up pressure and attacking on the counter. Australia will likely try to replicate that but they’ve got a far worse defensive record than the Canadians, and I don’t believe they’ll be able to stop the USA.

If you’ve watched the USA at all during this Olympic Games, you’ll know how patchy their performances have been.

They’ve been unable to score in three games — against Sweden, Australia, and Canada — but scored a combined eight goals in their other two contests against New Zealand and the Netherlands. It’s also worth noting that they scored six in a rout against New Zealand, which greatly inflates their numbers.

Australia also hasn't been hugely prolific on offense. They were unable to score in two games, against Sweden and the USA, and while they scored eight goals in their other three games, you also need to consider that two of those were in extra time against Great Britain.

Those stats don’t immediately make this game look appealing for goals, despite the goal total being favored to exceed 2.5. More interesting still, is that in recent Olympic Games history, only one of the last five women’s Bronze Medal matches having seen three or more goals.

Looking at the previous five Bronze Medal matches, we’ve only seen a total of nine goals, an average of fewer than two goals per game, and in that time we’ve also seen four games feature a team that was unable to score.

With both on-field trends and historic trends pointing us towards Under 2.5 goals, it seems like a great pick — especially at plus money. 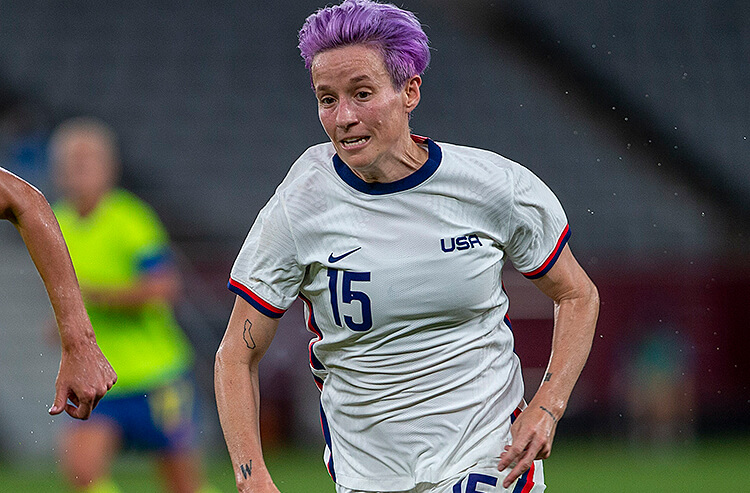 Australia vs USA Olympic Soccer Tips and Predictions: USWNT Need to Finish On a High Note
Provided by