The defending champion Tampa Bay Lightning are underdogs against the Toronto Maple Leafs in Round 1 of the NHL playoffs. Both teams feature high-octane offenses but we like Tampa's advantage in net and on defense in our betting picks for Game 1. 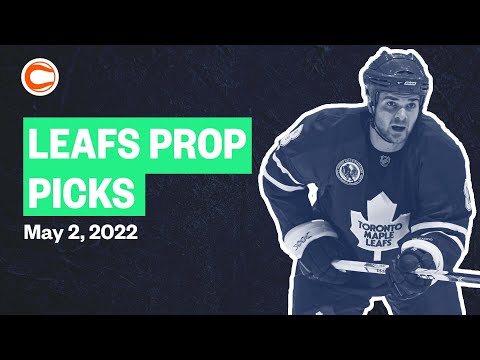 The Toronto Maple Leafs have the most pressure of any team in the playoffs to get out of the first round and in order to do so they are going to have to get by the two-time defending champions.

The Bolts have won five of their last six games coming into this one while the Leafs enter the postseason on a three-game win streak.

See who has the betting edge in our NHL picks and predictions for Lightning vs. Maple Leafs on Monday, May 2.

The Lightning opened up as +110 road underdogs and the line hasn’t moved but this writing. The total opened up at 6.5 and hasn’t had any movement either.

The road team is 7-3 in the last 10 meetings between. Find more NHL betting trends for Lightning vs. Maple Leafs.

Here we go again. The Toronto Maple Leafs are back in the Stanley Cup Playoffs and a lot of attention will be on them as they look to end their drought with a series win. Meanwhile, the Tampa Bay Lightning are ready to defend their title after back-to-back championship seasons.

This season series has been an exciting one, but the Lightning absolutely smacked the Leafs in their last meeting on April 21, winning by a score of 8-1.

These two teams match up very well against one another as they are both very offensive, the Leafs are the second-best offensive team in the league, averaging 3.8 goals per game, while the Lightning are seventh at 3.48.

That being said, the Lightning have the clear edge both defensively and in goal. They have the former Conn Smythe winner Andrei Vasilevskiy, who is one of the best goalies in the world with a 2.49 GAA and a .916 save percentage this season, which is somehow a dip compared to his otherworldly 2020-21 campaign. T

The Bolts have done a great job defending in front of him as they rank sixth in defensive proficiency, only giving up 2.78 goals per game.

Tampa has won five of their last six coming into this game and we've seen what this team can do come playoff time. I think there is too much value on them to start this series and they will set the tone in Game 1.

The last three meetings between these teams have been absolutely electric and high-scoring. In four total meetings, there have been a combined total of 28 goals.

These are two of the highest-scoring teams in the league. The Maple Leafs rank second in offensive production while also having the best power-play in the NHL, converting at a 27.3% clip. The Lightning’s man-advantage unit has been very effective as well, currently ranking eighth as they convert on 23.9% of their opportunities.

As good as Toronto’s offense has been all season, the biggest cause for concern is their defense and goaltending, which is nothing new.

Jack Campbell doesn’t have much playoff experience, but he did have a solid regular season with a .914 save percentage and a 2.66 GAA. This did come with some uneven stretches and he missed a chunk of time as well. I think he will have some nerves for this game and might be a little shaky to start the series.

Even though the Maple Leafs finished as the higher seed in the regular season, they have way more to prove based on an extended history of playoff disappointments.

Tampa took five out of a possible eight points against the Leafs in the regular season and they have all of the ingredients for success to make another run in the playoffs.

It's rare that you get the two-time defending Stanley Cup champions as underdogs and when you do, you must take advantage of it.