Not only has St. Louis dominated Minnesota of late — winning nine of the last 10 meetings — but they also have the Stanley Cup experience needed to win games like this on the road. That's why our NHL betting picks are backing the Blues in Game 1.

Central Division rivals will square off at Xcel Energy Center on Monday night as the St. Louis Blues visit the Minnesota Wild in Game 1 of their Stanley Cup quarterfinal series.

Both teams finished fast in April, with the Blues going 11-2-2, and the Wild going 12-2-2, but which team will carry their momentum into this clash? Find out in our free NHL picks and predictions for Blues vs Wild on Monday, May 2.

The Wild opened as consensus -135 moneyline favorites, and while some books have kept that price more-or-less intact, some sites have begun lowering Minnesota by a few cents with bets coming in on the Blues.

The total opened at 6, but 6.5 is now the prevailing number. Totals of 6 can still be found, but perhaps not for long.

The Wild are 2-9 in their last 11 playoff games as the betting favorite. Find more NHL betting trends for Blues vs. Wild.

Blues vs Wild picks and predictions

The Blues have dominated this division rivalry of late, and there’s little reason to think that will change Monday night.

St. Louis has won nine of their last 10 games against Minnesota, including a clean sweep of the season series (3-0). After blitzing the Wild 6-4 in the Winter Classic, the Blues followed up by beating their Central foes twice in April.

Robert Thomas and Pavel Buchnevich were tied for the team lead with five points apiece against Minnesota. Jordan Kyrou had a memorable four-point game at Target Field on New Year’s Day against the Wild.

The Wild boast the NHL’s third-best scoring offense at home (4.10 goals per game) – led by Kirill Kaprizov (108 points) – but Blues netminder Ville Husso should be up to the task. Husso has exceled with two or more days of rest this season, going 13-3-2 while allowing just 2.37 goals per game. His save percentage in that sample is .926.

Minnesota hasn’t won a playoff series since 2015, striking out in each of their last six chances, while taking only one of those series to Game 7. St. Louis has many of its core players from the 2018-19 Stanley Cup champion team still around, including captain Ryan O’Reilly.

We’re not calling for a sweep here, but the Blues are unlikely to be intimidated playing in the Land of 10,000 Lakes in Game 1, as they’re 7-1 in their last eight road affairs.

The Over has received plenty of betting action since the lines were opened, and that appears to be smart money.

Only the Toronto Maple Leafs (3.88 goals per game) scored more on the road than the Blues (3.76) this year. The ageless David Perron led the club in goals per road game this season, potting 15 pucks in 35 matches. Whether the Wild start Marc-Andre Fleury or Cam Talbot between the pipes in Game 1, they’ll be in for a tough contest.

Perron was also the team leader in power-play goals (11), and the Blues have notched at least one tally on the man-advantage in eight of their last 10 games against Minnesota.

The Wild are far too dynamic on offense to be shut down entirely. Like Kaprizov, Kevin Fiala (85 points in 82 games) and Mats Zuccarello (79 points in 70 games) averaged more than a point per tilt. Fiala led the club in goals (10) during the final month of the campaign.

There seems to be a pronounced edge on the Blues team total Over in this one, and bettors should take advantage.

The Blues have eclipsed this line in each of their last 10 games against the Wild, a team that allowed 3.04 goals per game this season. The St. Louis power play has been firing at 28% since April 1, the fourth-best mark in the NHL.

Eight Blues skaters notched at least 50 points this year – led by Vladimir Tarasenko (82) – so the depth of scoring on this team is quite significant. The Wild blueliners can’t just focus on any one player or line, making the task of keeping St. Louis off the scoreboard that much harder. 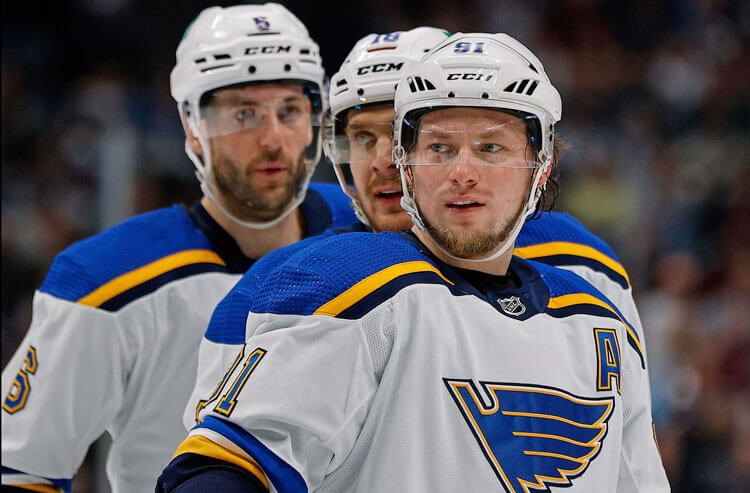