Both Carolina and Boston enter the Stanley Cup Playoffs with momentum, but the Canes have dominated the Bruins this season, going 3-0 and outscoring them 16-1. Our NHL betting picks think tonight's Game 1 will be tighter... but we're still fading the B's.

The Boston Bruins and Carolina Hurricanes are set to face off in Game 1 of their first-round playoff series tonight in Raleigh.

The Bruins have struggled against the Canes in the regular season, managing just one goal in three games, but Carolina will be without its No. 1 goaltender... at least for the beginning of this series.

The Canes haven’t had any issues offensively against the B's, scoring 16 goals in those three games, and enter tonight as the NHL betting favorite for both this game and the series overall.

See who starts their road to the Stanley Cup Final on the right foot with our free NHL picks and predictions for Bruins vs. Hurricanes on Monday, May 2.

The Under is 4-1 in the last five head-to-head meetings in Carolina. Find more NHL betting trends for Bruins vs. Hurricanes.

Bruins vs Hurricanes picks and predictions

Carolina goes into the playoffs with the third-best regular-season record... but is just fifth on the Stanley Cup odds boards. This is seemingly in part because there are a ton of question marks regarding the Hurricanes' goaltending situation leading into their opening series, mainly the fact that All-Star Frederik Andersen is still sidelined with an injury, but veteran backup Antti Raanta should not be slept on.

Raanta has been relied upon when needed all season for the Canes, posting a 15-5-4 record on the season with a 2.45 GAA and a .912 SV%. He has won his last four starts, only allowing a total of nine goals combined. Not only has he been solid, but the team has made it easy for whoever sits between the pipes, as the Hurricanes are among the best defensive teams in the NHL, allowing a league-low 2.44 goals and 28.2 shots against per game — while also having the league's No. 1 penalty kill (88%).

With Andersen out, the B’s have the edge in goal, but the Bruins offense has been unable to crack the Carolina defense this year. Both teams head into the playoffs with momentum, with the Canes winning six straight and Boston winning six of its last eight, but considering Carolina has dominated the head-to-head matchups so much and is on home ice... I think they take Game 1.

As mentioned above, these are two of the best defensive teams in the NHL — not just in terms of goals against but also in just clamping down on foes altogether.

They are both at the top of the league in limiting opponents scoring chances, with the Canes ranking first and the Bruins second in scoring chances against, at 9.12 and 9.15 against per game.

Despite the Bruins' lack of success against the Canes during the regular season, they do enter the playoffs on a bit of a hot streak, winning four of their last five games and giving up more than three goals just once. Ullmark specifically has surrendered two goals or fewer in six of his last seven starts as well.

The Hurricanes come into this game as winners of their last six games, and while they've seen five of those games go Over 5.5 goals, they seemingly have Boston's number in giving up just one goal in three head-to-head matchups.

The Under has also cashed in seven of Boston's last nine games overall, and the playoffs are a whole different animal. There will be a bit of a feeling-out process in Game 1, with both defenses overpowering the offenses.

The Bruins and Hurricanes have shown all season why they are successful teams — and the common theme is team defense.

The nerves will definitely play a factor as well, as they typically do in Game 1 of a series, especially on the opening night of the playoffs. Both teams are going to prioritize limiting their mistakes and I doubt we will see either team take many risks defensively.

There is incredible value on the Under, as we expect both teams' blue lines to shine. 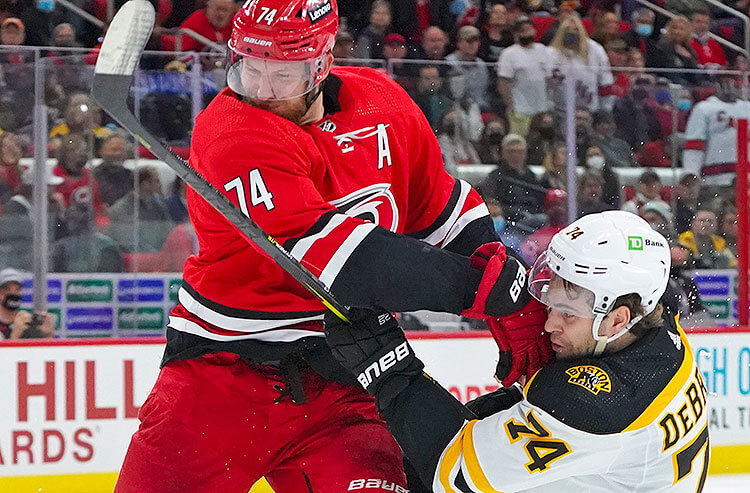 Bruins vs Hurricanes Game 1 Picks and Predictions: Stormy Start for Boston
Provided by