The Penguins were upset in overtime — at home — in Game 1 of their playoff matchup against the Islanders. Pittsburgh needs a win in Game 2 to avoid falling behind 2-0 in the best-of-seven series.

After winning Game 1 in a 4-3 overtime thriller, the New York Islanders face off against the Pittsburgh Penguins in Game 2 of their best-of-seven series on Tuesday night.

The Isles would like nothing more than to head back home with a commanding 2-0 series lead but oddsmakers are expecting the Pens to even things up, with NHL betting lines opening with Pittsburgh as a -135 favorite.

Here are our best free Islanders vs. Penguins picks and predictions for NHL playoff action for Tuesday, May 18, with the puck dropping at 7:30 p.m. ET.

William Hill US pegged Pittsburgh a -135 favorite on Sunday night, and late Monday night, the moneyline moved to -140, where it's stuck all day today. It's all Penguins for Game 2, with 88 percent of tickets and 95 percent of money expecting Pittsburgh to knot up this series. The total is stable at 5.5 (Under -145), with 71 percent tickets on the Over and 72 percent of cash on the Under.

The Under is 22-7-2 in the Islanders' last 31 road games. Find more NHL betting trends for Islanders vs. Penguins.

Pittsburgh finished the regular season on a high note, winning 10 of its final 12 games to take first place in the East Division. Led by Sidney Crosby and his 62 points in 55 games, the Penguins were the second-highest scoring team in the NHL with 3.45 goals per game.

They also got excellent play from Tristan Jarry during the second half of the season, with the goalie posting a 2.44 goals-against average with a .919 save percentage over his last 22 games.

The Islanders have been all about defense and goaltending this season, allowing the second-fewest goals per game in the league at 2.23 and ranking sixth on the penalty kill.  The Isles had far less success on the offensive end of the ice where they finished the season 21st in the league in both scoring (2.71 gpg) and power-play percentage (18.8).

Although the Isles won Game 1 on Sunday they had gone just 1-6 in the previous seven meetings between these teams this year.

With the Penguins 39-15 in their last 54 games at home and desperate to avoid another early exit from the postseason, look for them to come up big in Game 2.

These teams combined for seven goals in Game 1 but expect a renewed emphasis on defense tonight. Keep in mind that Jarry has been lights out at home this season, going 16-3-2 with a 2.35 GAA and .926 save percentage at PPG Paints Arena.

Although New York's starting goalie Semyon Varlamov (19-11-4, 2.04 GAA, .929 save percentage) is listed as questionable with an undisclosed injury, backup Ilya Sorokin has also played at a high level. The rookie went 13-6-3 with a 2.17 GAA and .918 save percentage during the regular season and came up huge on Sunday, turning aside 39 of 42 shots.

Regardless of which standout Islanders netminder gets the start, he will have a strong defensive team in front of him that ranks fifth in the league in high-danger chances allowed per 60 minutes at even strength.

Unfortunately for Isles fans, they have struggled to put the puck in the net — especially on the road, where they averaged just 2.0 goals per game during the regular season.

With the Islanders going 22-7-2 to the Under in their last 31 games on the road, back it again tonight.

Did you know that if you parlayed today’s NHL Islanders vs. Penguins picks, you could win $19.01 on a $10 bet? 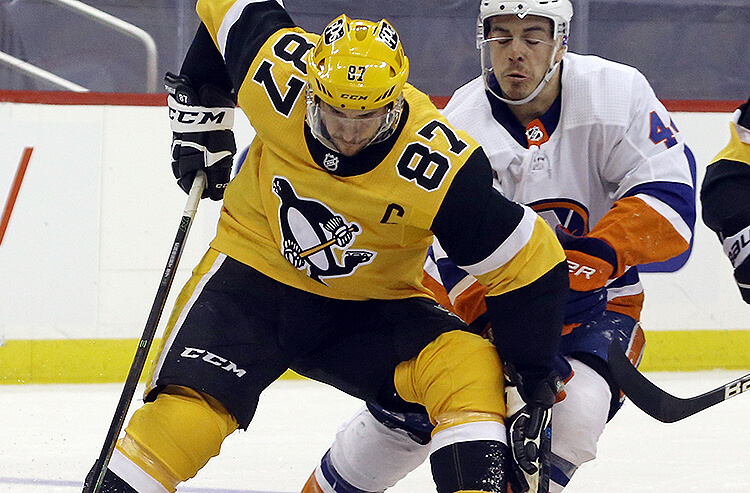