The Dallas Cowboys opened as big home favorites against the Las Vegas Raiders on Thursday, but several injuries bring that spread into question. The line could move quickly, so if you like Vegas on the holiday you will want to grab +7.5 now. 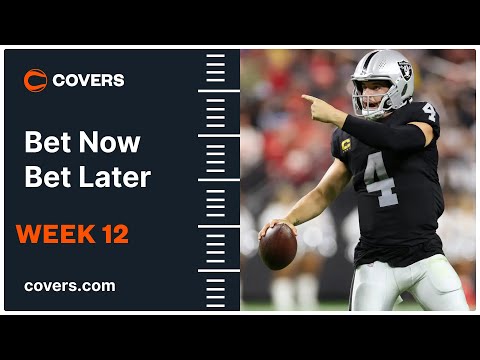 The NFL Week 12 odds are a special batch of betting spreads and totals, with a trio of Thanksgiving games on the holiday Thursday.

Getting the best of the Week 12 odds – much like grabbing the finest turkey for your Thanksgiving feast – is all about beating the crowds, which is why we pinpoint these NFL betting picks to make now. And, on the other side of that approach, we showcase some of the NFL odds you may want to let simmer - like your nana's secret gravy recipe - and bet later in the week.

The Silver and Black make the trip to Big D for the annual holiday showcase in Jerry’s World. Books opened Las Vegas as big as +7.5 on the road following the Raiders’ home loss to Cincinnati on Sunday, and that spread is starting to slim to a touchdown.

The Cowboys are dealing with notable injuries to the skill positions, with WR CeeDee Lamb leaving Week 11's loss at Kansas City and RB Ezekiel Elliott limited with a knee injury. On top of that, star WR Amari Cooper tested positive for COVID-19 before Sunday’s road trip to Arrowhead and since he’s not vaccinated, he’ll sit out this quick turnaround on turkey day.

Las Vegas’ offense has sputtered in the past three weeks, totaling a mere 43 points with an EPA per play of -0.088 in that span (22nd since Week 9). However, Dallas’ defense is tough to pin down, slamming the door over Atlanta at home in Week 10 following a 30-16 disaster versus Denver in Week 9. The Cowboys stop unit could also be sucking wind on a quick turnaround after chasing the Chiefs' high-octane offense around in Week 11.

On top of that, America’s Team is a dismal 1-9 ATS in its last 10 Thanksgiving games – a trend that will make the rounds on betting Twitter this week. If you’re fading the Cowboys on Thursday, grab the Raiders with the half-point hook on the touchdown while you can.

It appeared the table was set for another classic Aaron Rodgers’ come-from-behind win in Minnesota this past Sunday. Kirk Cousins, however, had other plans. Stop giggling … he did! Cousins did his best A-Rod impersonation and got the Vikings a massive momentum-building win before this trip to the Bay Area in Week 12.

Bookies opened the Niners as 2.5-point home chalk after their easy win in Jacksonville in Week 11 and that spread is juiced to -115, indicating a potential move to a field goal if early action lands on San Fran. The 49ers are a desirable short fave at home, winning two straight and three of its last four outings.

Minnesota has also won back-to-back contests, including an impressive road win over the Chargers in Week 10. The Vikings have thrived away from home, boasting a +0.434 points per play average as a visitor (8th) and going 4-1 ATS in enemy territory. If you like the Vikes in Week 12, slow your row (because Viking rowboats ... get it?) and wait to get a field goal or more by the bay.

Matthew Stafford and Aaron Rodgers rekindle their former divisional rivalry when the Rams make the trip to Lambeau Field for this 4:25 p.m. ET kickoff Sunday. The total opened between 49.5 and 50 points, and if you like the Under, you’ll want to grab that total now. I have a sinking feeling this number takes a tumble.

Los Angeles is coming off a bye, but is that enough time to tighten the loose screws on this offense, which has fallen off a cliff the past two games? The Rams went from one of the most potent scoring attacks in the NFL to putting up a total of 26 points and an EPA per play of -0.218 (27th) in losses to Tennessee and San Francisco.

Rodgers gets all the glory in Green Bay, but this Packers stop unit is no joke, especially at home. The Cheeseheads have allowed an average of only 11 points over their four home games in 2021 (that’s right, only four home games), most recently pitching a shutout over Seattle. To add to that home-field dominance, the extended forecast for Green Bay is calling for chilly temperatures flirting with freezing as this game stretches into the early evening.

Cam is back! The Panthers former/new quarterback has sparked this ho-hum offense to a total of 55 points the past two games, including 21 tallies in a loss to Washington on the weekend. That may not seem like much compared to other NFL scoring clips, but when you consider Carolina’s offense ranked 31st in EPA per play through the first nine weeks, you have to tip your giant-brimmed hat with a pink feather sticking out of it (12th in EPA last two games).

As for the Dolphins, they put up 24 points in their road win over the Jets in Week 11 behind a balanced playbook that amassed 388 yards. Sportsbooks opened this total as low as 42.5 points and it climbed to 43 quickly Sunday night. The lookahead line for his game was as big as 45.5 back in the summer and trimmed to 43.5 last week.

If you like the Under in this non-conference contest (and you might, considering non-conference games are 17-36-1 Over/Under – that’s 68% Unders), you may want to wait it out and see if this number climbs to 43.5 or 44. Behind all the Cam Newton hype, Carolina features one the best defenses in the league, and wouldn’t you know, these teams sit tied for second in EPA allowed per play since Week 9 (-0.278).