Sunday Night Football between the Seattle Seahawks and Pittsburgh Steelers offers more chances to find value in player props. Check out our favorite SNF prop bets, including Najee Harris cruising on the ground.

Sunday night brings us a battle between the Russell Wilson-less Seattle Seahawks and Pittsburgh Steelers. There are injuries on both teams and that means plenty of player props to take advantage of.

We bring you our favorite free prop picks and predictions for Sunday night’s Seahawks vs. Steelers Week 6 battle.

Since RB Chris Carson went on the IR, all the talk has been about Alex Collins, but this is a Pete Carroll team and the head coach loves to mix up his RBs. Enter DeeJay Dallas, who saw the second-most snaps behind Collins last week, with the majority of those snaps coming in the passing game.

Dallas caught both of his targets and totaled 32 yards. With Geno Smith under center, we could see a more conservative passing approach which would hopefully get Dallas heavily involved. He ran the two-minute drill with the offense as well.

Dallas’ yardage props are hard to find but his receiving yard total should be taken with the Over at any number below 23 yards. Since we can't find his receiving props, we’re grabbing his anytime TD prop that is available for a sprinkle-worthy +800. Dallas didn’t get any carries in the RZ last week, but he was one of five players to receive a target in the RZ. He also finished second among RBs in carries in Week 5 and could be more involved against a Pittsburgh defense that is bound to allow a running back to score. It’s a 0.3 unit play for us.

Geno Smith took off three times for 23 yards in just 25 snaps with the offense last week in relief of Wilson. It’s been a while since the former second round QB has seen a regular season snap, and bringing the ball down seems like a logical option for a player who may be slow to read defenses.

The Pittsburgh defense is also an angle we like in regards to his rushing total. The Steelers don’t blitz much but get pressure on the QB at a Top 5 rate (28.8 percent pressure rate). Having more players in coverage and feeling a pass rush may be difficult for Smith to find the open man and when his internal clock hits zero, he may want to find other options using his legs.

His rushing yards total opened at 14.5 but was hit early and now sits at 17.5 with most books at 18.5 and 19.5. Pittsburgh is allowing 14.6 QB rushing yards per game and hasn’t seen any running-threat QBs since Week 1 when Josh Allen ran for 44 yards.

It took five weeks but the Pittsburgh Steelers and Najee Harris finally have had some success running the ball. Over the last two weeks, the rookie running back has totaled 184 yards on the ground at a 4.84 ypc clip. That is a massive improvement from Weeks 1 through 3 where the Steelers ran for just 123 yards with Harris.

Harris ran for a career-high 122 yards on 23 carries and a TD versus a very good Denver defense in Week 5 and a similar 20-plus carries could be in store Sunday night with the Seahawks ranking 24th in yards per rush allowed at 4.6 yards.

Harris shares carries with no one, as Benny Snell just has eight carries on the year. That means if Mike Tomlin wants to run against a Geno Smith-led Seattle team, Harris could see another 20-plus rushes again this week.

Harris’ rushing total is 77.5 yards across the board which matches his season high from Week 2. Darrell Henderson and Sony Michel combined to rush for 119 yards on 28 carries last week versus Seattle. In fact, Seattle has allowed an 80-yard rusher in four straight weeks. Let’s have Najee be the fifth. 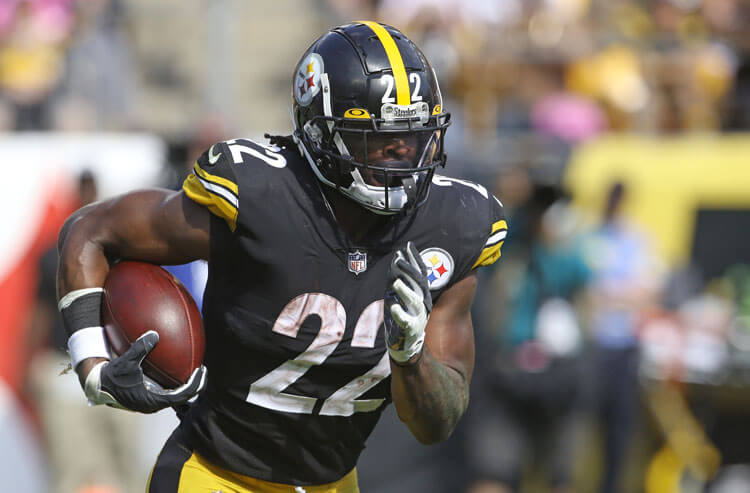