Ravens vs Patriots Week 3 Picks and Predictions: Lamar Puts On a Show

When Baltimore faces New England at Gillette Stadium, big things are always bound to happen. Find out why we expect an offensive explosion on Sunday afternoon by reading our Ravens vs. Patriots betting picks.

Week 3 of the NFL is right around the corner, and we have a solid AFC matchup for you.

The Baltimore Ravens are looking to get back on track after blowing a 21-point lead last weekend in a home loss to Miami.

Meanwhile, the New England Patriots defeated Pittsburgh 17-14 to pick up their first win of the season.

Now facing one another, which team will win this important clash? Find out in our NFL picks and predictions for this Week 3 showdown between the Ravens and Patriots on Sunday, September 25.

Ravens vs Patriots picks and predictions

Baltimore is a high-scoring offense, and if New England has any chance to win this game, it’ll need to keep up with the Ravens. Quite frankly, I just don’t see how the Patriots' defense is going to stop Lamar Jackson.

Jackson has been a monster this season, throwing for 531 yards with seven TD passes, alongside an additional 136 rushing yards and a TD. The former league MVP has been picked off just once in 59 attempts and been sacked only twice.

He was a limited participant in Wednesday’s practice (elbow), but he should be good to go Sunday. Wideout Rashod Bateman and tight end Mark Andrews are the main recipients of Jackson’s passing skills, and the duo has combined for 20 receptions with three TDs already this season. We should expect some big plays from these two on Sunday against a banged-up Pats secondary.

The Pats' defense has looked stout, but Baltimore will certainly be the best offense this team has faced thus far. New England is allowing just 17 points per game while surrendering 219 passing and 78 rushing yards. Baltimore will be their biggest test yet, however, and I fully expect the Ravens to take last week's embarrassing meltdown out on New England.

Patriots' QB Mac Jones has been steady but also threw a couple of costly picks this season. The Pats signal-caller has thrown for 465 yards and a pair of touchdowns, and if it weren’t for the turnovers, New England might be 2-0.

Jones could do damage against the Ravens' secondary, as they currently aren’t the most confident bunch out there. Wideouts Jakobi Meyers and Nelson Agholor have hauled in a combined 22 passes for 288 yards and will be Jones' biggest downfield options on Sunday.

New England will also run the ball down the throat of defenses. Damien Harris and Rhamondre Stevenson are the main ball carriers, combining for 192 yards and a Harris TD. The Baltimore rushing defense is gritty, and it will be tough for the tandem, but I like Harris and Stevenson to chip away and get the job done.

The Ravens' defense shut down the Dolphins for three quarters before allowing four touchdowns in the fourth quarter, and that is the type of thing Pats' coach Bill Belichick will exploit. While it may not be enough to win the game for New England, it will help to cover the spread.

Ultimately, I think the offenses will surprise the respective defenses and exceed the total in Week 3.

The spread opened at Patriots +3.0, dipped down to 2.5, and is now back to its original number.

Baltimore should be 2-0 on the season, and while I’m sure it’d love to call it an aberration, allowing 28 points in the fourth quarter isn’t the stuff of great defenses, and New England should be able to score.

The Patriots' defense has been stellar, but Baltimore is better offensively than Miami and Pittsburgh. It isn’t a stretch to think the Ravens will score on New England the same way they did against the Jets.

I suppose Baltimore is the more logical choice, but there are better spread options on Sunday than this game offers.

New England is also dealing with some injury concerns in the defensive backfield, with CB Jalen Mills and DB Adrian Phillips both listed as questionable. If they can’t go, Jackson could have a big day throwing the pigskin.

The Over is 4-1 in the last five meetings between these two teams. Find more NFL betting trends for Ravens vs. Patriots. 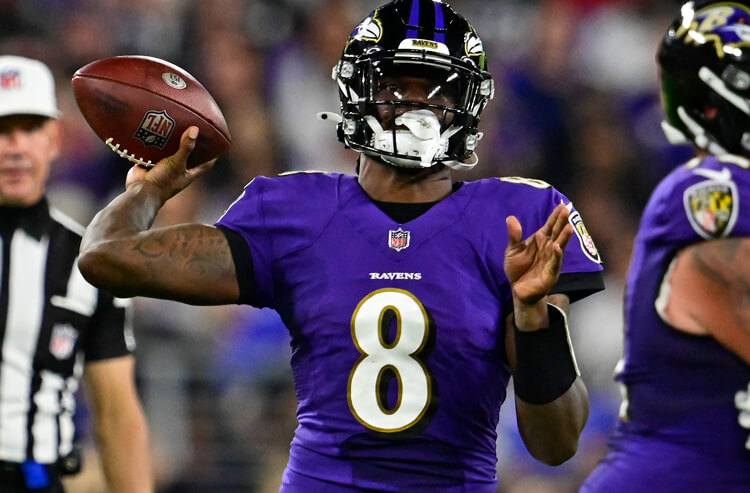 Ravens vs Patriots Week 3 Picks and Predictions: Lamar Puts On a Show
Provided by