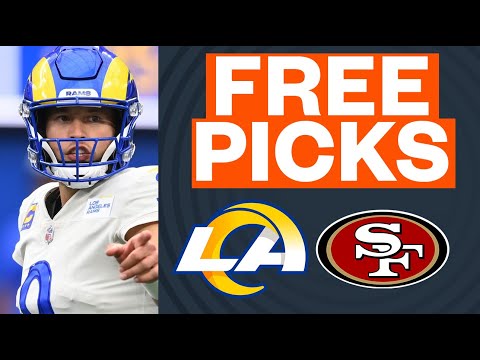 The 49ers only managed 50 plays in that game and are the slowest team in terms of pace of play so far this season when it comes to neutral situations. With left tackle Trent Williams out, is there much hope for the 49ers’ offense as they face the No. 1 defense in EPA/rush?

Find out in my free NFL player prop picks for Monday Night Football between the Rams and 49ers.

Also: check out our full Rams vs. 49ers picks and predictions.

Even with Trent Williams healthy, Jimmy Garoppolo has an expected completion rate that’s 5.4% worse than his actual completion percentage, which puts him in the Davis Mills/Joe Flacco section of the category. Now he’ll have to do it without Williams on his blindside vs. a very good defense that blitzes at a Top-10 rate.

Garoppolo completed just 16 of his 30 passes vs. the Los Angeles Rams in the NFC Championship game, and with the snail’s pace that this San Francisco 49ers team is running at in 2022, a high-volume game might not be in the cards for the quarterback Monday night.

Additionally, with how good this San Francisco defense has been (five touchdowns allowed through three games), Garoppolo and the offense won’t be staring down multi-score deficits at home as the favorite, which will also keep the pace slow.

The loss of Williams is an issue vs. an Aaron Donald-led defensive front, and if the 49ers do play with the lead, they will be in no rush to run plays as they sit dead last in plays per second in neutral situations. Only two other teams in football are rushing the ball at a higher percentage than Shanahan’s offense.

Jimmy G’s worst completion percentage game last year came in Week 7 with Williams out, where the QB finished 16 for 27 passing (59%) for 181 yards and two picks in a game in which the Niners trailed for the entirety of the second half.

This could be the last week we see books give us a rushing total in the 30's for Deebo Samuel. He is 2-1 O/U on the season in regards to his rushing total, but last week’s six-carry five-yard performance is tough to get excited about when looking at a number like 30.5.

The main argument here is the rushing opportunities. Even with an injured backfield, Samuel is getting just four to six carries a game. He needed a 51-yard run with four carries for the Over in Week 2 and had a 27-yard trot in Week 1. Banking on these long runs is not profitable week to week as a 30-plus yard run can pay around +750 for an RB1.

Samuel had seven carries in the NFC Championship game and finished with just 26 yards — and that was with Williams, who graded as the best run-blocking tackle in football last year, per Pro Football Focus. Samuel prefers to gain the edge when running, and losing his best edge blocker is massive.

At a projection of four to six carries, this 30.5 total is too long for me. I’m happy to hit the Under for a second straight week.

Bettors cannot find a Darrell Henderson Jr. rushing total as of Saturday, and the reason is Cam Akers' usage of late. After a poor showing (possibly injury related) in the opener vs. the Bills, Akers has seen his snap share increase in two straight weeks.

It’s a tough matchup on the ground for the Rams, but with the lack of offensive production from the 49ers’ offense, this game script should remain neutral.

With a rushing total of 40.5 yards, Akers would just need 3.3 yards per carry over the span of 12 rushes. I think is more of his floor than his ceiling.

Sean McVay had no worries about running at this 49ers’ defense in the NFC Championship game, and had 23 rushes from his RBs (13 from Akers for 48 yards). They also had 26 RB rushes vs. the 49ers in Week 18 last season.

THE BLITZ is projecting 54 rushing yards for Akers on Monday night. No rushing total being currently offered for Henderson is very telling about the backfield reps Akers has been getting.

Rams vs 49ers MNF Prop Bets: Garoppolo Won't Play Much of a Factor
Provided by