It's been a turbulent start to the season for the Denver Broncos, but they are being undervalued as home pups on primetime against the San Francisco 49ers. Read more to find out our best three underdog bets for Week 3. 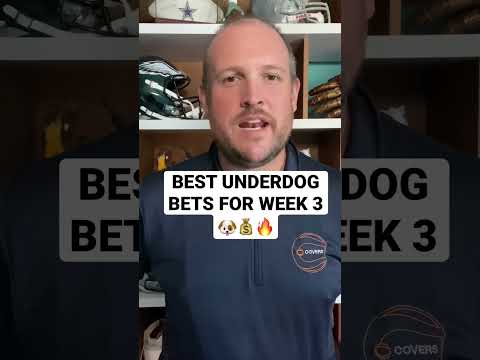 Panic comes in many forms, but whether mild or major, it has the same effect. Judgment is clouded and reaction often comes from a place of desperation, rather than being carefully thought out.

Panic is why the kids in the horror movie run into the woods instead of driving away in the car. It’s why you’re still going through all that toilet paper you hoarded in April 2020. And it’s why some NFL point spreads are completely turned around from their look-ahead lines of the summer.

Panic is a real MF’er.

Two weeks of NFL betting results — especially unexpected results — can do that. But now is not the time to panic. Even with my weekly NFL Underdogs picks and predictions starting 1-5 ATS out of the gate, I’m breathing deeply and trying to keep calm like Bruce Banner waiting in line at the DMV.

We approach NFL Week 3 underdogs the same way we would approach a dog that just stole something out of the garbage: calm and collective but careful, knowing that that dog would happily bite your fingers off to protect a half-eaten pork chop.

NFL picks against the spread for Week 3

The Green Bay Packers are a perfect example of a team not pushing the panic button after a dud of an opener.

Green Bay lost at Minnesota in Week 1 but kept its cool, notably with some of Aaron Rodgers’ young targets. The Cheeseheads played smart and calculated football on both sides of the field versus Chicago last Sunday and walked out of Week 2 with the fourth-best team DVOA ranking at Football Outsiders.

Rodgers spread the love with eight different targets recording a catch, and the rushing game didn’t play around either, totaling 203 yards on the ground. That helped the Packers defense check the Bears to 10 points and only 11 first downs, with Chicago touching the football for less than 23 minutes.

Green Bay was a 3-point underdog on the look-ahead line at Tampa Bay and re-opened +3 on Monday morning, with early play fading a 2-0 Buccaneers team. Bookies want to give Tom Brady and the Bucs credit, but victories of 19-3 and 20-10 aren’t winning over bettors.

This Tampa offense has fallen off the face of the earth — largely due to injuries on the offensive line and to skill players. The Bucs have floundered on first downs, rank 25th in EPA per play, and have had a number of miscues which even resulted in Brady “Gronk spiking” his Microsoft Surface last Sunday. That looks like panic to me.

The Green Bay stop unit is doing what defenses need to do to get the best of Brady: generate pressure without bringing the blitz. The Packers have cooked up a pressure rate of 40.8% (second-highest) despite attacking with extra pass rushers on only 20.4% of dropbacks.

They’ve allowed an average depth of target of just 6.5 yards, and with the Bucs once again marching out a makeshift WR corps (Evans suspended, Godwin and Jones questionable) plus missing another body on the O-line (Josh Wells out), keeping Brady contained isn’t that tall a task.

We’re doing this: we’re betting on the Atlanta Falcons? Or perhaps we’re fading the Seahawks? Whatever we need to tell ourselves, we’re taking the two points with Atlanta.

The Seahawks hemorrhaged yardage but were let off the hook by the Broncos’ bumbling in Week 1. Seattle was then rolled 27-7 by San Francisco last Sunday. That has Pete Carroll’s crew coming back to Lumen Field ranked 29th in EPA allowed per play, yet still giving points.

The Falcons are 0-2 SU but 2-0 ATS, covering as sizable underdogs against top-tier defenses. Atlanta put up 26 points against the Saints in Week 1 and scored 27 versus the Rams last Sunday, subtly sitting No. 12 in Offensive DVOA at Football Outsiders and facing a much softer stop unit in Week 3.

The Falcons have three dynamic — and beefy — weapons in WR Drake London, TE Kyle Pitts, and RB/WR Cordarrelle Patterson, who can also throw their weight around versus a Seattle defense that ranks second in missed tackles (21) and has allowed the second most yards after the catch (340) through two games.

The Seahawks are also thin at linebacker and just lost their most versatile defender in veteran safety Jamal Adams. If the Falcons' ground game gets going behind Patterson, it supercharges the RPO offense of Arthur Smith and makes life easier on QB Marcus Mariota, who’s still a threat to break big runs.

In my Week 3 NFL spot bets article, I also mentioned how the Falcons are staying on the West Coast for Week 3, rather than traveling back and forth across the map. That could end up being a big positive — even with back-to-back road games.

There will be plenty of times to bet against Atlanta this season, but Week 3 ain’t one of them.

The betting markets have pushed the panic button on the Denver Broncos after just two weeks of action.

From a wretched red zone offense to the media lambasting new head coach Nathaniel Hackett, stock in Denver is down. So much so, this team went from a 2.5-point home favorite to a 1.5-point home underdog in a matter of 24 hours.

Bettors are bailing after 68% of picks took Denver -6 in Week 1 and then 57% laid -10.5 in Week 2 — getting burned by an underperforming offense. I’m not jumping off this bucking Bronco just yet.

The offense is disjointed, but it’s far from bad. Denver has generated 6.1 yards per play (sixth in the NFL) but hasn’t been able to punch it in with a 0-for-6 count in the red zone. The Broncos still rank No. 8 in EPA per play, despite the offense getting dumped on like the fourth Matrix movie.

Denver's defense, meanwhile, has done good work. Sure, the Broncos took on pop-gun attacks in Seattle and Houston, but they shutout the Seahawks in the second half and gave up only nine points to the Texans. What else do you want?

San Francisco enters with mixed results as well, with wet and wild weather having a big say in how it and its opponents performed in the first two weeks. The Niners have faced Justin Fields and Geno Smith as QB competition and now take on Wilson, who historically whooped that ass when playing San Fran: 16-4 SU with a QBR of 100.2 in those 20 games.

The 49ers limp into this Week 3 Sunday Night Football game, on top of going up the mountain to play in the thin air of Mile High. San Francisco is, of course, down QB Trey Lance and back with Jimmy Garoppolo, ripping plenty of new pages out of Kyle Shanahan’s post-Jimmy G playbook. The running backs room is once again a ghost town, and TE Tyler Kroft is out with fellow TE George Kittle still nursing a groin injury (questionable).

Given those missing pieces and the Broncos’ home-field edge (37-12 SU at home in the first four weeks of the season since 2000), the line move from -2.5 to +1.5 seems a bit dramatic for a Denver team that actually sits 11th in Team DVOA — just behind the 49ers — but with a much higher ceiling in Week 3. 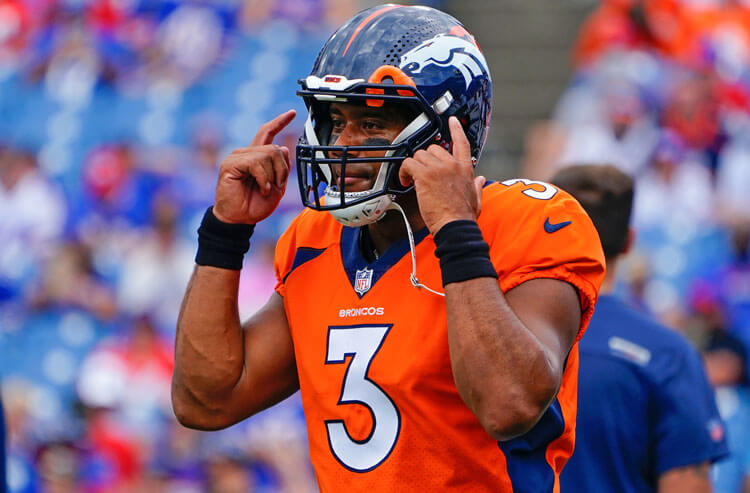