Patriots vs Packers Week 4 Props: Doubs Delivers in a Blowout

There's unlikely to be any last-second dramatics at Lambeau this week, as the Packers are 9.5-point favorites against the Patriots. Our player prop picks look at both sides of a blowout between New England and Green Bay.

Last week saw Aaron Rodgers and Tom Brady square off for what is likely to be the final time. After getting one over on Brady, Rodgers and the Green Bay Packers will now turn to Bill Belichick and the New England Patriots in Week 4.

While last week's duel came down to the final moments, competitiveness may not be ahead in Green Bay as it's a 9.5-point NFL betting favorite ahead of Sunday.

A potential blowout weighs in here, with our best NFL prop picks for the Patriots vs. Packers, with kickoff on October 2.

Tell your neighbors, shout it at your hard-of-hearing relatives, and puff out your chest: It's Rhamondre Stevenson szn. New England's best running back had a delayed takeoff in 2022 but the past two weeks have seen the sophomore runner take on a greater role both on early downs and as a pass-catcher.

It's all wonderful, with Stevenson an absolute stud, but for this purpose, we're going to look at his role in the passing game. Since Ty Montgomery — who, for some reason, was given a legit role in Week 1 — went on I.R., Stevenson has been empowered to make the role his own.

In Week 2, Stevenson ran a route on 60% of Mac Jones' dropbacks, seeing two targets, then had his route participation jump up to 66% in Week 3 as he caught four passes for 28 yards. There has always been a quality role for the pass-catching back in New England's backfield, and Stevenson has now made it his own.

Yet, Stevenson's receiving yards total is at 13.5, a total he more than doubled a week ago, and less than half of the per-game production Brandon Bolden — New England's special-teamer-turned-third-down-back — had last season. This is in a game in which the Pats are 9.5-point dogs and could be playing from behind throughout.

On one side of the coin is Stevenson's out-sized receiving role, as a result of a game New England could really struggle in. On the other side is AJ Dillon closing out a dominant Packers win on the ground.

By now, Green Bay's backfield split between Dillon and Aaron Jones is pretty clear. And in that split, Dillon is the base-down grinder and the one who the Packers will lean on to salt away games, while Jones is the dynamic talent able to stress defenses. In what could be a blowout, Dillon will have a long runway to kill the game and accumulate numbers.

The game script, with the Packers favored by 9.5 points, will play into our favor here but the matchup is nice too, with the Pats' run defense leaving a lot to be desired early in the year. New England's 25th in rushing defense EPA and 29th in DVOA, as a shallow front and slow-footed linebacker corps has combined to be exactly what you'd expect.

Dillon isn't an overly efficient runner but at 52.5 yards, the volume that will come in an uncompetitive game will help him hit the Over and I'm happily taking it for both his yards and carries (12.5).

It took a few weeks longer than some may have expected, after a summer of hype, but rookie receiver Romeo Doubs showed up in a big way for Green Bay and Aaron Rodgers last week. After playing a bit-part role in the first two games, Doubs ran a route on 34 of 36 Rodgers dropbacks and earned eight targets, catching all eight for 73 yards.

If you think Doubs' larger role will not sustain, then you haven't been paying attention to Green Bay's talent-poor offense or Rodgers' stranglehold on personnel. Rodgers needs and trusts Doubs, and Doubs produced. He will remain a central part of the offense moving forward.

While a potential blowout would usually have me shying away from receiving yards, at just 40.5, Doubs could quite easily go Over well before game script factors in. Certainly, if he's going to be running a route on nearly every dropback and getting a 23% target share, like he did last week.

This is a horrendously shallow Patriots defense, and Rodgers is going to carve up a unit that is in disarray. In the process, Doubs' growing role and connection with Rodgers will be on full display, as the rookie goes Over a low total. 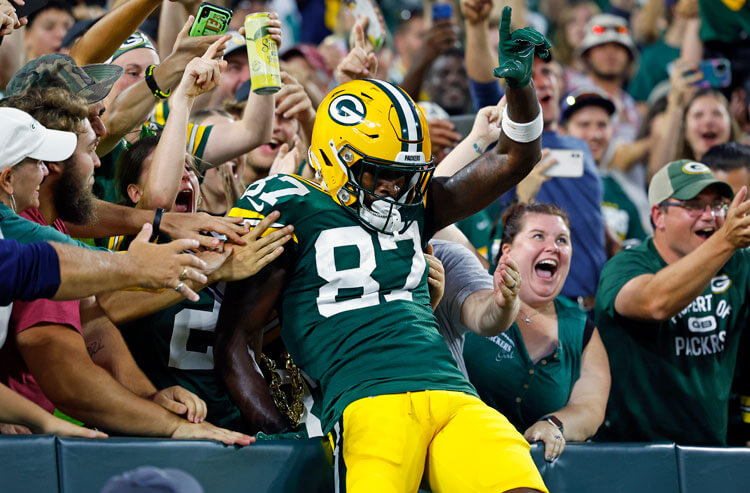 Patriots vs Packers Week 4 Props: Doubs Delivers in a Blowout
Provided by