Jaguars vs Saints Preseason Picks and Predictions: QBs Air It Out at the Superdome

This might be Jameis Winston's last shot to get the starting nod over Taysom Hill, while this game could be a showcase for Gardner Minshew. Expect big plays from the QBs and a lot of points. Read more in our Jaguars vs. Saints picks and predictions.

A Week 2 preseason tilt between the Jacksonville Jaguars and New Orleans Saints takes on added weight with both teams attempting to lock up its regular season starter at quarterback.

The Saints have Jameis Winston and Taysom Hill competing for the Week 1 gig but now have more questions than answers after a dismal exhibition open versus Baltimore. Jacksonville, on the other hand, is trying not to get too confident in No. 1 pick Trevor Lawrence after a solid showing in his preseason debut.

Check out our NFL free picks and predictions for Jaguars vs. Saints in Week 2 of the NFL preseason.

The Jaguars failed to cover as 1.5-point home favorites in Urban Meyer’s preseason debut. Jacksonville was 0-4 ATS in the 2019 exhibition schedule (2020 cancelled due to COVID-19) and is 9-13 ATS in preseason play since 2015. Find more NFL betting trends for Jaguars vs. Saints.

The Saints opened as 3.5-point home favorites for this Week 2 exhibition contest and have climbed to -4 with early play on the host team.

That action may a bit surprising considering how bad New Orleans’ preseason opener went, with the team committing six turnovers — three of those coming via INTs from the quarterbacks. That said, the Saints lost just 17-14 despite those mistakes as well as 10 penalties for 63 yards, and this second tune-up game will see Winston and Hill get more action.

Winston will start at quarterback on Monday after going 7-for-12 passing with 96 yards, a touchdown and an interception in relief of Hill against Baltimore last week. That also means the former Heisman winner will play the bulk of his snaps with New Orleans’ first-team offense, an indication that this may be Jameis’ last-gasp effort to grab the QB1 job away from Hill, who looks like the Week 1 leader in the clubhouse.

Tossing Hill in with the second-team offense is a good thing for Saints backers. While his surrounding talent on Monday isn’t on par with Winston’s supporting cast, Hill’s ability to make plays with his legs have made him a preseason hero in past summers. He didn’t make a single rushing attempt last week, completing 8 of 12 passes for 81 yards and an INT, but should have some free range with the run against a Jaguars defense still learning Joe Cullen’s multi-look 3-4 scheme.

Behind the two QBs competing for the top spot on the depth chart is Notre Dame rookie Ian Book, who turned heads with his mop-up performance in Week 1 of the preseason. Book finished 9 for 16 with 196 yards and a pick.

After a sloppy and undisciplined showing in last week’s preseason opener, expect Saints coach Sean Payton to tighten the bolts and get a much better performance in Week 2.

New Orleans is giving Winston his best shot at winning the starting QB role in this game so expect the Saints to take some shots downfield. He’ll have first-team talent backing him up against Jacksonville’s first and second-team defensive units, which allowed 13 first-half points to the Browns last week.

Hill’s playmaking and crazy legs will compound that as the Jags reach deeper down the defensive depth chart in the second and third quarter.

As for the Jacksonville attack, Urban Meyer has not officially announced his QB rotation for Monday after going with Lawrence as the starter in Week 1 of the exhibition slate. Gardner Minshew may get the nod in Week 2, protecting Lawrence from the Saints’ defensive starters but also giving possible suitors a good look at Minshew, who is rumored to be on the trade block.

Regardless of the QB, Meyer is preaching pace and tempo for his offense this preseason. Jacksonville has potential pop at the skill positions, with elusive running backs capable of catching passes and a respectable receivers room that features Marvin Jones, D.J. Chark (who's out but expected back for Week 1), and second-year WR Laviska Shenault Jr. The fast indoor track at the Super Dome should showcase that speed.

With both coaches wanting to kick the tires on their QB situations, expect more balls through the air which equals big gains and incompletions — stopping the clock. And for what it’s worth, the third-string QBs — Book and C.J. Beathard — held their own in Week 1 of the preseason.

This total opened at 37.5 points and has ticked up to 39 with early attention on the Over. 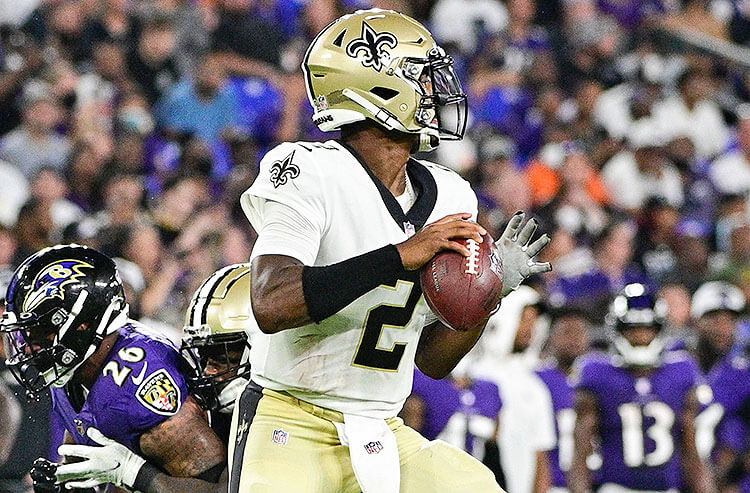 Jaguars vs Saints Preseason Picks and Predictions: QBs Air It Out at the Superdome
Provided by