It's not just any NFC East matchup in Week 3, as Carson Wentz faces the Eagles under center for the Commanders. Wentz and Philly's ugly breakup will draw the headlines but our NFL betting picks outline why the Eagles' running game will rule the day.

It’s always awkward bumping into an ex. You have to smile through your teeth and do that weird “ass out” hug while pretending to be neutral on all the history between you.

The Philadelphia Eagles are in the midst of all that awkwardness as they prepare to visit former franchise quarterback Carson Wentz and the Washington Commanders in Week 3.

“Wentz Week,” as the Philly media has dubbed it, has Eagles head coach Nick Sirianni doing what we all kind of do with our exes — a little light stalking — calling around to former coaches and tapping anyone in the building with added info on Wentz ahead of this run-in.

Undefeated Philadelphia was the offseason betting darling for futures and after a 2-0 start, the hype train is picking up steam with early week action inflating this point spread.

I break down the spread and Over/Under total as well as give my best NFL picks and predictions for Eagles at Commanders on September 25.

Eagles vs Commanders picks and predictions

All the focus in this game is on the Eagles quarterbacks of past and present, but the real star will be the Philadelphia rushing attack — still very much the backbone of this offense.

The Eagles continue to run the ball at a high rate, handing off on more than 52% of snaps and Miles Sanders remains the bell cow back. He’s been on the field for 39.5% of plays and put up rushing yard totals of 96 and 80 yards while amassing an average of 5.9 yards per carry to start the year.

Washington enters Week 3 ranked out 27th in EPA allowed per handoff, not only getting roughed up by Detroit RB De’Andre Swift but also getting bowled over by Jacksonville’s combo of James Robinson and Travis Etienne. The Commanders are 31st in run defense DVOA at Football Outsiders and are allowing an NFL-worst 7.5 yards per carry to opposing rushers.

To make matters worse, the Washington defensive line is banged up, with DT Jonathan Allen fighting through a groin injury and Chase Young still sidelined. The depth on the D-line could also be tested in Week 3 with the Wednesday injury report listing DE Shaka Toney out with an illness, DE Casey Toohill nursing a concussion, and Daniel Wise out with an ankle injury.

The Eagles' run game gets harder to stop the better Jalen Hurts passes the ball and with Hurts coming off a terrific Monday showing, Washington won’t be able to stack the box against a Philly offense boasting the fourth highest success rate per dropback in the league (50.3%).

Sanders will get his on handoffs and RPOs, and the weather in D.C. could also keep things on the ground if rain and wind play a factor. Since this spread is flirting with a touchdown, the Eagles are expected to get up big and the run game will get extra reps in the second half as Sirianni ices the win in Washington.

A) AJ Brown and Terry McLaurin to each score a touchdown BOOSTED to +600 at Caesars! Bet Now

The look-ahead lines set in the summer months had Philadelphia installed between a PK and -1, with markets shifting toward the Eagles with positive expectations after a solid offseason of additions.

After the Week 1 results, this spread climbed to Philadelphia -3 and re-opened -4 last Sunday night before Philly’s MNF matchup with the Vikings. Washington is coming off a road loss to the Lions as 1-point favorites in Week 2 and the Eagles scored a Week 1 win in Motown but didn’t cover as 6-point road chalk — a five-point difference in those spreads.

After the Eagles’ dominating performance over Minnesota on Monday Night Football, this spread jumped to as high as -7 at some books. Buyback has brought it down under the key number of a touchdown with the market consensus at Philadelphia -6.5.

According to PointsBet sportsbooks, 78% of bets and 77% of handle is riding on the visitor while Covers Consensus splits shows 59% of picks on Philly.

This Over/Under was at 46.5 points on the lookahead line before the season, but after explosive Week 1 offensive efforts from both the Eagles and Commanders, the total jumped to 50.5 points heading into Week 2.

The official opener trimmed to 49 points after Philly flexed its defensive muscle against Minnesota on Monday and with the Eagles’ zone defense protecting against the deep ball and Washington offensive coordinator Scott Turner wanting to push the ball downfield, early money showed up on the Under and dragged this number as low as 47 points.

The Eagles' dominant rushing attack has been able to control clock and pace, chewing up time of possession, and helping out a defense that guards against anything over the top. Neither team has done well slowing down the run, which could lead to shorter gains that keep the clock moving which is conducive to Unders.

As of this writing, 57% of bets have been on the Over at PointsBet but 72% of the money is banking on the Under. Covers Consensus is showing 57% of picks on the Over as of Thursday morning. 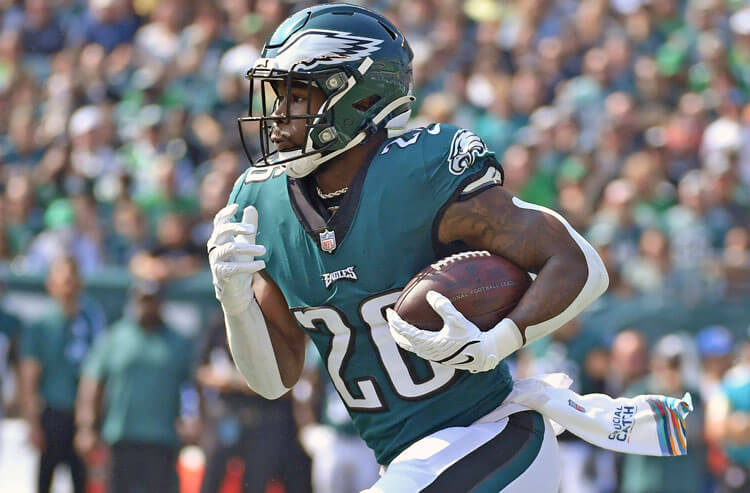 Eagles vs Commanders Week 3 Picks and Predictions: Philly Grinds Washington Down
Provided by