Dallas Goedert has been a favorite target of Jalen Hurts, and figures to see lots of targets against a vulnerable Cardinals secondary with his QB under pressure. See why we're backing the TE with our Week 5 NFL betting picks.

The Philadelphia Eagles pack up their undefeated record and head for the desert, visiting the Arizona Cardinals in Week 5.

Philadelphia is the lone unblemished NFL club at 4-0 straight up (3-1 ATS), most recently taking advantage of a rain-soaked Jaguars team and five turnovers from Jacksonville last Sunday. Weather won’t play a role in this matchup with Arizona, which is coming off its best effort of 2022 with a dominating win over Carolina in Week 4.

Despite being a very public draw for NFL betting action, the line is moving away from Philadelphia after opening as a 5.5-point road favorite. I dig into the point spread and Over/Under total for this game and give my best NFL picks and predictions for Eagles at Cardinals on October 9.

Be sure to also check out Alistair's favorite player prop plays heading into this matchup.

Eagles vs Cardinals picks and predictions

Ailments to the Eagles’ offensive line could be an issue against an Arizona defense that loves to bring the blitz. The Cardinals own the second-highest blitz rate in the NFL (42.2% of dropbacks) which has manifested into the 10th-highest pressure rate entering Week 5.

Jalen Hurts has played very well through four games but still shrinks when blitzed, completing only 50% of throws and seeing his yards per attempt shorten up to 5.4 compared to 10.5 yards per pass when left alone. If that pressure gets after the Philly QB, his release valve will be tight end Dallas Goedert.

Books have Goedert’s yardage prop as low as 41.5 for Week 5 — a bar that’s set very low considering his role in this Eagles attack and a soft spot for the Arizona stop unit.

The Cardinals’ aggressive defense has left them susceptible to short strikes to tight ends, allowing the second-most yardage to the position as well as three touchdowns to TEs already in 2022.

The Cardinals have clashed with some elite TEs so far, giving up 121 yards on eight catches to Travis Kelce, 50 yards on six grabs and a TD from Darren Waller, 61 yards on four receptions to Tyler Higbee, and even allowed 34 yards on three catches to Carolina TE Tommy Tremble last weekend.

Goedert may not carry the same star power as Kelce or Waller (or the same prop totals), but the former South Dakota State Jackrabbit ranks out No. 2 in DYAR for the position at Football Outsiders, owns the fifth-most receiving yards among tight ends, boasts one of the best reception percentages, and is hitting bigger plays (15 yards per reception) than his contemporaries.

He's built those numbers on his ability to pick up yards after the catch, reeling off an NFL-best 12.8 average YAC, and now faces a Cardinals defense sitting dead last in YAC allowed (624) along with 20 missed tackles.

Goedart has topped his receiving yards prop in four of his last five games, going back to the playoff loss to Tampa Bay last season. His yardage total has bounced between 35.5 and 50.5 O/U with so many other weapons on this Philly offense, but his ability to break big gains and the Cardinals' weakness to TEs makes him very live to top the 41.5-yard total in Week 5.

The look-ahead line for this matchup was much tighter back in the summer, with Philadelphia actually set as a 2.5-point road underdog. But with the Eagles soaring out of the gate and the Cardinals opening 2022 against a very tough slate of opponents — Kansas City, Las Vegas, L.A. Rams — the market perception on these teams has flipped.

The Eagles' offense is a force, ranked No. 5 in EPA per play, while the Cardinals’ shortcomings on defense have been exposed when facing those elite teams earlier in the season. Arizona’s secondary was expected to struggle and has — sitting 28th in EPA allowed per dropback — against QBs not named Baker Mayfield.

The official Week 5 opener hit the board at Philadelphia -5.5 on Sunday night but with more injuries popping up on an already-depleted offensive line, the line has since sunk to as low as -5 with some Arizona +5.5 still up at some shops. Early money has taken the points with the home side, showing a decisive split at some operators.

According to PointsBet books, 63% of bets on the spread are riding the undefeated Eagles but 74% of the handle is backing the Cardinals as of Thursday morning. Covers Consensus shows 52% of picks on Philadelphia.

This total had a lookahead mark of 49.5 points back in the summer, even with Arizona WR Deandre Hopkins suspended. You have two young and capable dual-threat QBs in Hurts and Kyler Murray playing indoors on the fast track inside State Farm Stadium.

Hurts & Co. have lived up to the preseason hype, with a thrilling combo of ground-and-pound and potent passes to a talented group of receivers. The Cardinals, on the other hand, have been inconsistent on offense, with injuries to some top targets. Rondale Moore was back in Week 4 but now Hollywood Browns is missing practice heading into Week 5.

PointsBet books are reporting heavy action on the Over, with 75% of bets and 73% of money banking on a high-scoring finish. These teams faced each other in 2020, with Hurts under center as a rookie in late December. The Cardinals won 33-26 at home, easily going Over the closing total of 49.5.

Arizona head coach Kliff Kingsbury is a disappointing 9-16-1 SU and 9-17 ATS at home during his tenure with the Cardinals (since 2019), including 0-2 SU and ATS as a host in 2022. Find more NFL betting trends for Eagles vs. Cardinals. 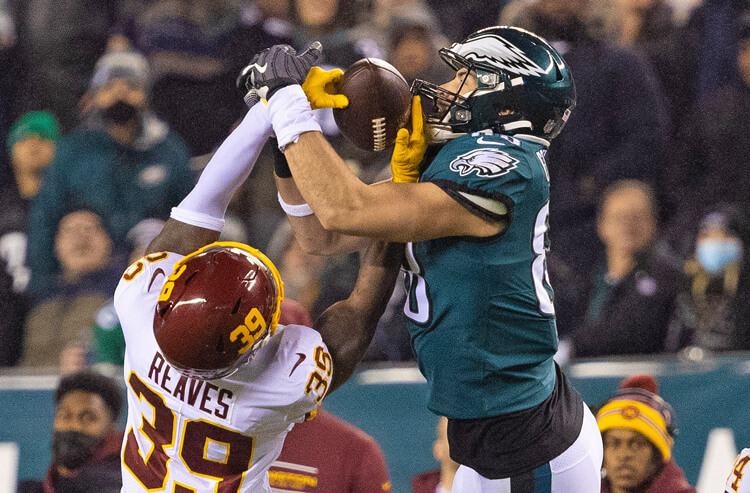 Eagles vs Cardinals Week 5 Picks and Predictions: Goedert Does Cards Dirty
Provided by