Kyle Trask was a Heisman candidate for most of this past NCAA football season, but has seen his draft stock plummet after an ugly postseason exit.

NFL Draft betting has come a long way over the past few years. It wasn’t long ago when there were only a handful of NFL Draft prop bets available, but no longer. Not even close. Even with Day 1 of the 2021 NFL Draft in the books, there are lots of draft betting options available for savvy football bettors looking to wager on Rounds 2 and 3, set to go Friday night.

There is still plenty of talent left on the board as the Jacksonville Jaguars are on the clock to start the second round, and that means the NFL Draft prop bets market is still going strong. Check out our best prop bets for the 2021 NFL Draft.

The Jacksonville Jaguars made the most obvious NFL Draft selection since the Indianapolis Colts took Andrew Luck. Trevor Lawrence is a Jag and then they reunited him with running back Travis Etienne. So, switching to the defensive side of the ball with the first pick of Day 2 seems like the obvious choice, but I’m not so sure with the way the board has played out to them.

I don’t think the Jags were expecting the likes of Elijah Moore and Teven Jenkins to be there when Round 2 began, and wide receiver and tackle are still both positions of need for Jacksonville. Jenkins is a strong tackle with great hands and didn’t give up a sack the last two seasons, while Moore is an explosive wideout, also with great hands.

If you can find a "will the Jags draft an offensive player" prop go bet it, you should at least get close to even money, maybe better. Otherwise, sprinkle on each of these and if they go offense, you walk away a winner.

New York Jets GM Joe Douglas certainly has a plan when he is heading into draft night. From very early on in the process the Jets were linked to BYU’s Zach Wilson and that’s exactly the direction they went. Douglas has also now spent two first-round picks in the last two drafts fixing the offensive line building a foundation for Wilson’s success.

Last year, another need was wide receiver, which he addressed by taking Denzel Mims in the second round. While many Jets fans would like to see them add a running back here, the biggest need for the Jets now is a corner, where they could use as many as three new starters. Asante Samuel Jr. from Florida State makes a ton of sense here and if not him Georgia’s Tyson Campbell wouldn’t be a reach either.

OK, we swung and missed on this pick last night, but we’re going back to the well for Day 2. The Tennessee Titans addressed a glaring need by selecting cornerback Caleb Farley out of Virginia Tech in the first round. To be fair, the Titans probably were not expecting a corner of Farley’s caliber to be available when they picked at No. 22.

So, the Titans' other glaring need is a pass catcher. After losing Corey Davis and Jonnu Smith in free agency, A.J. Brown is suddenly all by himself. But he shouldn’t be for long with a draft class of wide receivers as deep as this.

If the Titans are lucky, a guy like Rondale Moore out of Purdue might fall to them, and if not, Nico Collins from Michigan or Amari Rogers from Clemson would be a good fit here as well.

Most of the really QB-needy teams addressed their issues in Round 1, leaving Davis Mills, Kyle Trask, and Kellen Mond as the top signal-callers left on the board. None of these guys are going to be drafted with the expectation that they need to step right in and lead an offense, and teams don’t usually like spending 2nd round picks on backups.

Trask is kind of the forgotten man of the SEC quarterbacks, he was a Heisman contender for most of the year and probably has a better arm than Mac Jones. But a bad bowl loss to Oklahoma to end the year left a bad taste in a lot of people’s mouths in regards to his draft stock.

But it gets interesting in the third round. A team to keep an eye on is the Washington Football Team, which has two third-round picks and the only player of consequence in their QB room is the Bearded Bomber himself – Ryan Fitzpatrick. But teams like the Atlanta Falcons, Philadelphia Eagles, and Detroit Lions could all look to improve their QB room in the third round.

Where can I bet on the NFL Draft?

Most online books and casinos offer bets on the NFL Draft and odds generally begin to appear after the season. Check out the NFL futures odds at the best sportsbooks available where you live. 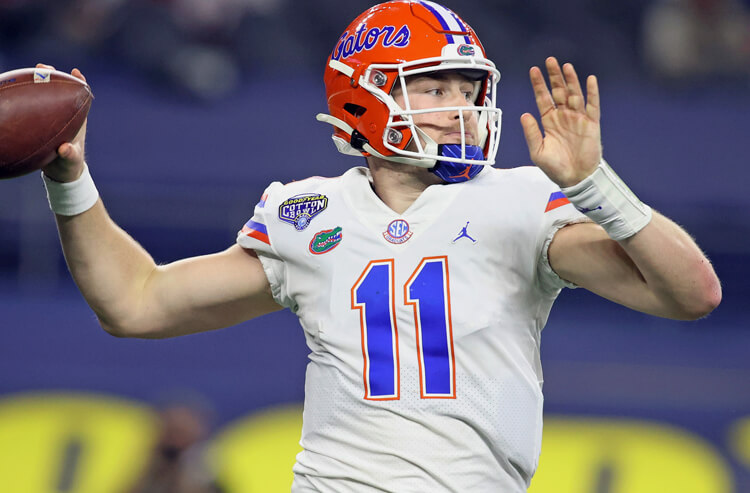