We're giving you our best props for 2022 NFL Draft prop odds - here we're looking at some massive value available for Travon Walker to go third overall, which is currently can be found as high as +600 at some sportsbooks.

We are a little over a week away from the Jacksonville Jaguars being on the clock, and NFL Draft odds are now at the forefront of pro football bettors.

As more and more tidbits of information begin to leak out — and more NFL Draft props — are made available, betting on the occasion becomes increasingly enticing.

In particular, there is a lot of intrigue around what happens with the first-overall pick and how it will shape the rest of the draft, with a handful of names taking turns sitting at the top of various NFL mock drafts.

All those movements, plus the expectations with pick No. 1, have seen recent developments in the market that generate value for NFL Draft props — including who will go third overall.

If you're signing up for a new sportsbook for the NFL Draft, here are two of the best bonuses* available:

Michigan edge rusher Aidan Hutchinson has been the favorite to go first overall for over a month now, and the only name to really come close has been Georgia DT Travon Walker.

But there have been odds shifts elsewhere in the past 24 hours that possibly gives us insight into how the top picks may pan out.

Oregon's Kayvon Thibodeaux has seen his odds to go second overall (to the Detroit Lions) take a massive jump, and he is now the odds-on favorite across many books. Thibodeaux was the general consensus pick to go first overall prior to the 2021 college football season, but he saw his stock drop during the draft process, between his inconsistent tape and reported concerns about his character and love for the game.

However, that narrative has begun to swing back lately. On Monday it was reported that Thibodeaux had a "great meeting" with the New York Jets (who pick No. 4 and No. 10) and reputable draft analysts/insiders Peter Schrager and Dane Brugler have linked Thibodeaux to the Jets at fourth overall in updated mocks published within the last week.

So what could Thibodeaux rising back up the Draft odds board imply? It may signal that the Lions' preferred pick — Hutchinson — is gaining steam to go No. 1 and that the Lions would then have to settle for the other main edge rusher on the board (Thibodeaux). It could also possibly imply that the Jets are eyeing a move up from the fourth pick to No. 2 to secure Thibodeaux — if they have good reason to believe the Texans would take him at three.

Either way, this leaves Walker as the odd man out. And quite frankly, if there is one of the top-end players we should expect to fall, it's Walker.

Some point out his lack of production in college as a demerit, while others argue it was a product of the role he played in Georgia's outstanding defense. But the reality is that Walker's stock really only rose as much as it did following his outstanding showing at the combine — and the merit of taking him this high is based on his projected high ceiling.

If Walker is out of the running to go first and second overall in this scenario, there are some great prop options on the table. He could certainly capture the eye of Texans GM Nick Caserio and new head coach Lovie Smith at third overall — in which case, you can find Walker to go third overall as high as +600.

But that's not all.

The Texans could opt to go with an offensive lineman at No. 3, which is their most frequently mocked choice, with it typically being Ikem Ekonwu. There's also some smoke about them possibly eyeing a cornerback.

In either case, if Walker slips past third overall you can find Walker to go Over 3.5 (aka fourth overall or later) as high as +195.

The beauty of these two options is that given their odds, you can attack them in varying ways based on how likely you view Walker to go (or not go) at No. 3. 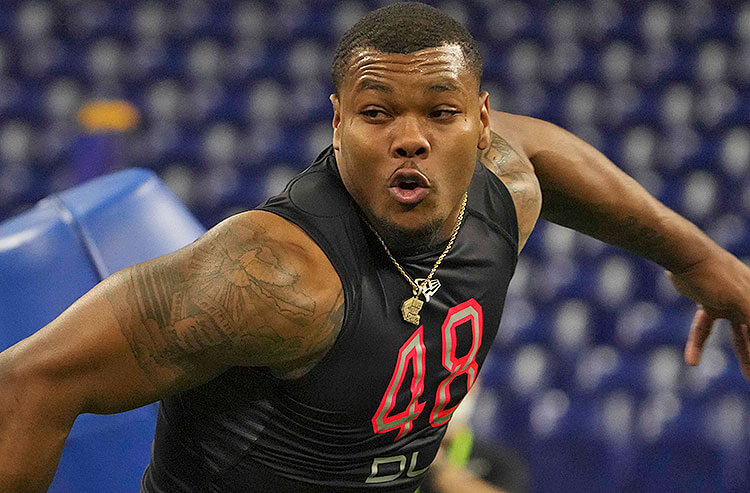