All eyes will be on CeeDee Lamb and Cooper Kupp as Dallas and L.A. square off, but lesser pieces in both offenses will shine in Week 5. Our player prop picks for the Cowboys vs. Rams highlight those players and more.

Dak Prescott's nearing return will loom over this game but regardless, an excellent game is on deck in Southern California in Week 5, when the Dallas Cowboys and Los Angeles Rams meet.

Dallas has successfully navigated its spell without Prescott, heading to L.A. at 3-1. Los Angeles, on the other hand, is just 2-2 and facing a real identity crisis amid offensive struggles.

Both the perseverance of Dallas's offense and the struggles of L.A.'s are highlighted in our NFL player prop picks for the Cowboys vs. Rams.

As the Rams' offense has regressed in 2022 into a gimmick passing game forced to manufacture yardage and a maddeningly inefficient running attack, Tyler Higbee's importance has risen and his role has changed.

Once used as a seam-stretcher and frequent red-zone target in a high-flying L.A. passing game, Sean McVay has taken to using Higbee as an extension of the running game. Matthew Stafford is frequently hitting the tight end on tunnel screens to give the offense easy completions and stress the defensive front horizontally, in the absence of an effective wide zone game.

Higbee's changed role has led to him seeing by far the biggest workload of his career, with his targets (9.5) and catches (6.5) per game well above his previous career highs of 5.9 and 4.6. He's simply involved far more than ever before, largely a result of the Rams' shallow pass-catcher corps, with his target share (25.5%) and route participation (85.3% of Stafford's dropbacks) both easily career highs, too.

With Higbee's targets coming so near the line of scrimmage, the Over on his receptions total has become a favorite play of mine — and is again so here. He's gone Over in this market in three of four games this year and now faces a Cowboys defense that has allowed the seventh-most targets to tight ends in the NFL.

Speaking of the toothless Rams passing game, no single player better exemplifies it than Allen Robinson.

The offseason addition was among the most hyped players in camp, with almost everyone expecting a resurgent season from the former Pro Bowler, who was finally in a good spot after spending most of his career with Blake Bortles and an endless collection of talentless arms in Chicago.

Instead, Robinson has been one of the worst and most inefficient receivers in the entire NFL, period. Despite running a route on 92.7% of Stafford's dropbacks, Robinson has just a 12.1% target share this year. His yards per route run is an impossibly awful 0.68 — 94th among qualifying receivers in the NFL — and perfectly captures his status as first-team All-Cardio in 2022.

Robinson's receiving yards total sits at 38.5 this week, a far cry from the 65.5 it closed at in Week 1, but I'm still not hesitating in taking the Under. There is simply no metric, surface level or underlying, that suggests positive regression is to come for Robinson. L.A.'s passing game is bordering on broken, and Robinson's got both feet firmly planted on the other side of the washed border.

Arguably the disappointment of the year so far, Robinson's role and play have been so bad he's a nearly automatic fade. Against a Cowboys defense fifth in passing defense DVOA and second in passing defense EPA, it's that much easier to take the Under on A-Rob's yards total.

After an offseason of (rightful) handwringing over the trade of Amari Cooper and the meh place it left the Cowboys' wide receiver corps, Dallas was largely successful in navigating its time without another member of its former WR trio, Michael Gallup, who made his season debut on Sunday.

A major part of that success was thanks to Noah Brown, whose chemistry with Cooper Rush helped him to emerge as a legitimate option for the Cowboys. Through the first three weeks, Brown earned 21 targets and converted them into 15 catches and 213 yards.

It was the long-time special teamer maximizing an opportunity, with Brown earning a 20.1% target share and running a route on 83.4% of the Cowboys' dropbacks. He was, and has, flat-out just been getting open — exemplified by Brown ranking third in the NFL in yards per route run vs. man coverage.

With Gallup back and playing a regular snap share, it would have been fair to expect Brown's production and role to lessen. It did not, however, with the former Buckeye seeing six targets and turning them into three catches for 61 yards, with both his target share (22%) and route participation (82.1%) maintained despite Gallup's presence.

Brown's receiving yards total this week is at 36.5, a number he has easily exceeded in every game this year (his single-game low is 54 yards). With Gallup back in the fold and CeeDee Lamb commanding attention from Jalen Ramsey, Brown should again easily top this total. 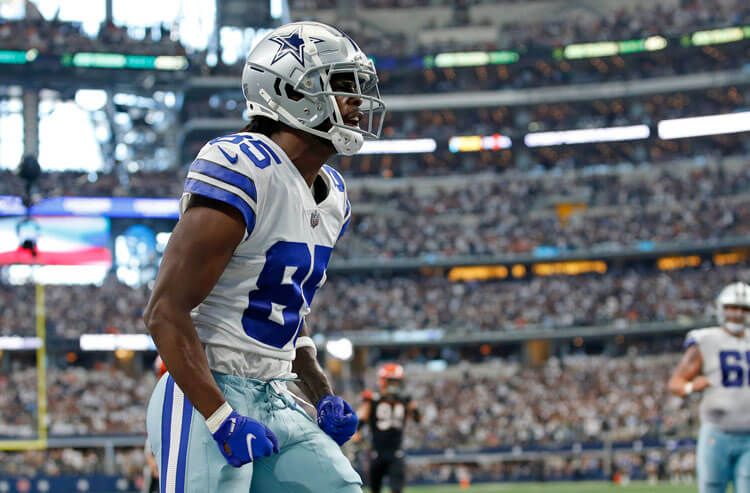