Indianapolis hobbles into Dallas Sunday after playing Monday night — and this one will get ugly. With the potential for the Cowboys to go up big, our NFL betting picks predict plenty of groundwork to eat up the clock, giving Zeke a ton of opportunity. 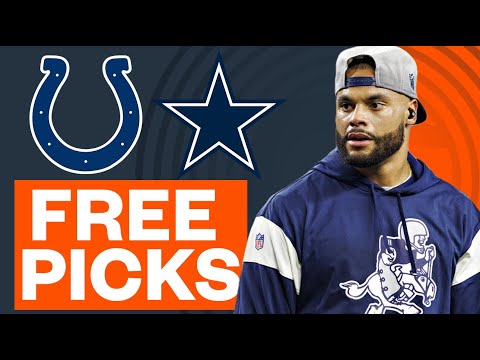 The Dallas Cowboys hit the home stretch of the NFL schedule in Week 13, hosting the Indianapolis Colts as hefty double-digit favorites on Sunday Night Football.

Dallas is third in the NFC after taking care of business on Thanksgiving, with an impressive win over the rival Giants. It has won four of its last five contests, with that lone blemish coming in a late collapse and overtime defeat in Week 10.

Indianapolis, on the other hand, showed just how shaky things are under interim head coach Jeff Saturday, who bungled clock management in the final minutes of last Monday’s loss to Pittsburgh. Indy's disjointed attack runs into another dangerous defense in Arlington, which is why this total is trending so low.

I size up the point spread and Over/Under for Sunday Night Football and give my best NFL betting picks and predictions for Colts at Cowboys. Be sure to also check out our three favorite SNF player props for this matchup.

Colts vs Cowboys picks and predictions

Given the larger point spread, game script for Sunday Night Football calls for the Cowboys jumping out to a sound lead, and likely leaning on their two-headed monster in the rushing attack of Tony Pollard and Ezekiel Elliott to take this one home.

Elliott has been working his way back from a knee injury that cost him time in the middle of the schedule but is starting to round into form, coming off a great game against the New York Giants in which he carried the ball 16 times for 92 yards and a touchdown. Zeke looked much livelier in that Thanksgiving Day win and now has had a mini bye to rest and ready himself for the Colts.

"I feel a lot better, getting better every day," Elliott told the media. "I almost feel like I could get out of this brace, but we going to keep it on just for safety reasons. I feel good.”

Elliott saw his snap count spike to 38 in Week 12 after playing only 21 snaps in his first game back from injury in Week 10. He also surrendered touches to RB3 Malik Davis in that matchup with Minnesota, as the Cowboys were crushing the Vikings in the second half and resting stars.

Indianapolis has been stout vs. the run this season — ranked No. 7 in EPA allowed per handoff — but faces a stiff challenge on the short week. The Colts just played on Monday, with that stop unit spending more than 35 minutes on the field, and now must travel to Dallas to face a Cowboys rushing attack rolling over their last five foes (No. 6 in EPA per handoff since Week 7).

Dallas’ “muddled” no-huddle approach on offense can exploit a tired Indianapolis defense. Dak Prescott has been quick getting his offense back to the line of scrimmage, preventing the defense from making substitutions, then is reading the D pre-snap and often checking to the run.

Elliott’s rushing yards Over/Under for Week 13 is sitting at 50.5 yards, which seems too low considering he’s been able to top that bar in seven of his nine games in 2022. The offensive line sits No. 6 in run block win rate and has the best “power success” at Football Outsiders (83% first-down rate on third/fourth down runs of two or less yards), which fits the clock-killing game script for the Cowboys in the final frames.

With fresh legs, game script, and a tired Indy D — along with a dangerous Dallas defense giving the offense plenty of extra touches — Zeke can topple this modest peak on Sunday Night Football.

A) Ezekiel Elliott and Tony Pollard each Over 69.5 rushing yards BOOSTED to +425 at Caesars! Bet Now

B) Tony Pollard and Jonathan Taylor to each run for 50+ rushing yards BOOSTED to +125 at FanDuel! Bet Now

This spread hit the board as low as Dallas -9 early Tuesday morning, following the Colts’ loss to Pittsburgh at home Monday night. Action quickly came in on the Cowboys, moving this spread as high as -11 before a buyback on the big underdog bumped this line to -10.5 as of Friday morning.

Before breaking down both sides, Dallas comes into this matchup with a significant rest advantage having last played on Thanksgiving Thursday. That gives it a mini bye to rest and prep for Indianapolis, which travels on a short turnaround in Week 13.

While the line opened -9, this move to double digits is warranted when you put these clubs up against each other. Dallas’ offense has found its stride since the return of QB Dak Prescott. The Cowboys have posted 28 points or more in four straight games and own the No. 2 offense in terms of EPA per play since Week 8.

Indianapolis’ offense showed brief signs of life in its upset over Las Vegas in Saturday’s first game but has since stalled out with veteran QB Matt Ryan back under center. A big part of the problem is a lack of protection from the offensive line, which has watched Ryan get sacked seven times in the past two games. Even the rushing attack with RB Jonathan Taylor is having issues gaining traction, ranking 28th in EPA per handoff over the previous two weeks.

WynnBet sportsbooks are reporting one-sided action on the home team, with 65% of bet count and 82% of handle laying the pile of points with the Cowboys. Dallas enters Week 13 with a 7-4 against the spread record while Indy has gone 5-7 ATS.

This total opened as low as 52.5 and has climbed to 53.5 points, with the larger spread indicating the potential for plenty of points — especially with the Cowboys' offense clicking. Dallas has been pumping out the points in recent weeks, going Over in three of the past four games.

But with this total on the low end for Cowboys games, it’s the mismatch between the Colts’ sputtering offense and Dallas’ aggressive defense that defines the total. Indianapolis has mustered 16 and 17 points vs. quality defenses in Pittsburgh and Philadelphia the past two games.

The Cowboys enter Week 13 ranked No. 1 in Defensive DVOA at Football Outsiders, but more impactfully tops in pressure rate and total sacks (47) on the season. The Colts' offensive line is among the worst in the NFL, sitting 31st in ESPN’s Pass Block Win Rate and watching Ryan hit the turf 32 times in his 10 games.

That inability to protect has led to hurried plays and careless throws, with Ryan tossing 10 interceptions to just 11 touchdowns. Overall, the Colts have been plagued by turnovers and top the league in giveaways with 21. The Cowboys love to create chaos and have generated 16 takeaways on the year.

Dallas has been susceptible to the rushing attack, sitting 25th in yards allowed per carry (4.7) but considering this monster spread, game script sees the Cowboys building a big lead and forcing the Colts to play from behind and pass more than they would like.

Looking to Indianapolis’ defense, this has been the one positive for this franchise. The Colts are 10th in EPA per play allowed since firing head coach Frank Reich ahead of Week 10 and have been especially stingy against the passing game, allowing only 6.1 yards per attempt in that span.

That said, this stop unit was on the field for 34:22 on Monday night and don’t have much time to catch their breath before facing a Cowboys attack doing damage through the air and on the ground.

Dallas boasts a 4-6-1 O/U record so far in 2022 while Indianapolis is an even better Under bet at 3-9 O/U entering Week 13. BetMGM books are reporting 84% of bet count and 79% of money on the Under for Sunday Night Football.

Since Dak Prescott arrived in Big D, the Cowboys have been a fantastic favorite when laying a lot of points. Going back to 2016, Dallas is 26-5 SU and 22-9 ATS (71%) when set as a favorite of -6 or higher, including a 4-2 ATS record when laying double digits. Find more NFL betting trends for Colts vs. Cowboys.