The Cardinals looked pretty awful in Week 1, and their depleted roster won't be giving Kyler Murray much more help against the Raiders. See why our NFL betting picks think Derek Carr's in for a monster Week 2.

Two Week 1 losers will meet in the desert Sunday, September 18 as the Las Vegas Raiders host the Arizona Cardinals. With another extensive injury list for the Cardinals that includes three players in the secondary, Derek Carr will pad his Week 2 stats after he shook off the rust in the first half last week.

Here are my free NFL betting picks and predictions for Cardinals vs. Raiders.

Cardinals vs Raiders picks and predictions

Derek Carr took six sacks and had nine quarterback hits last week vs. Joey Bosa, Khalil Mack, and the Chargers, but the Raiders QB should have a lot more time in the pocket against the Cardinals, who created zero sacks and just six QB hits last week.

The sad thing is that the Cards blitzed more than any other team in football in Week 1 — 28 times on 39 dropbacks. This left a weak secondary exposed and it got picked apart as only one defender in coverage allowed a QB rating under 100. This team is thin at defensive back and dealing with injuries, so Carr could have one-on-one coverage downfield with the Cards blitzing at a high rate.

Patrick Mahomes was blitzed on over half of his dropbacks (54%) for the first time in his career.

Mahomes threw a career-high 4 TD passes vs the blitz, tied for the most in a game in the Next Gen Stats era (since 2016).#KCvsARI | #ChiefsKingdom pic.twitter.com/BaelGfAFlZ

The Las Vegas secondary should help Carr stay in pass mode as it didn't play much better than Arizona's did in Week 1. Only the Rams and Cardinals had a worse dropback EPA in Week 1 than the Raiders.

Josh Jacobs ran for 5.6 yards per carry last week but saw plenty of soft defenses while trailing, as Carr enjoyed his new receiver in Davante Adams whom he targeted 17 times for 141 yards. Hunter Renfrow only had three catches, so there is room for this passing game to be more productive in Week 2 after Carr threw for 295 yards.

Arizona could be without JJ Watt, corners Marco Wilson Trayvon Mullen, and starting safety Jalen Thompson. It could be a very productive day for Carr and the passing game. His passing yards closed at 265.5 yards last week and the nine-yard increase isn't enough as this was already a low number posted last week.

A) Darren Waller and Zach Ertz each record a catch Over 19.5 yards BOOSTED to +300 at Caesars! Bet Now

The books opened the Raiders as a field goal favorite or at -2.5, but that number didn’t last long as influential money came in on the home side and has run this number to as high as -5.5 and could hit 6.

Arizona looked awful on both sides of the ball in Week 1 vs. Mahomes and the Chiefs as injuries played a big part in that game. The Cards were missing key pieces in the secondary, and on both the defensive and offensive lines. Zach Ertz wasn’t 100% and is also questionable for Week 2.

The Cardinals will roll out a three-WR set that includes Marquise Brown, AJ Green, and Greg Dortch. Despite trailing for the majority of the game, No. 4 WR Andy Isabella ran just 15 routes while no other TE other than Ertz ran a passing route. It was a terrible offensive showing against an average Kansas City defense last week.

The Arizona defense might be the bigger issue here as Patrick Mahomes dismantled it for 360 yards and five scores. All but one Arizona defender in coverage allowed a passer rating of 100 or more, per Next Gen Stats. Now it has to stop Adams that a legit Chargers’ secondary couldn’t stop.

It took Carr two quarters to shake off the rust but he managed to move the offense in the second half vs. the Chargers despite a heavy pass rush of  Bosa and Mack that helped create six sacks and nine quarterback hits.

The Raiders' pass defense wasn’t much better than the Cardinals' last Sunday, as all but one of their coverage defenders allowed a QB rating of at least 100, as well. However, the laundry list of injuries that the Cardinals are facing is what is driving this line movement.

Arizona’s injury report currently contains its best D-lineman, three defensive backs (including a starting corner and safety), the starting tight end, and three starting O-linemen. This team did not get healthier from last week and the lack of depth at DB will be exposed by the new Carr-to-Adams connection, especially if it can't generate any pressure.

The high total is warranted, as both of the defenses were porous in Week 1, which saw their respective offenses chase points early and often.

Both passing games will have plenty of success today vs. their opposing secondaries. This banged-up Arizona defense allowed the worst EPA/play last week and a 0.698 dropback EPA — also dead last. Las Vegas’ pass defense didn't fare much better and finished 30th in dropback EPA at 0.483.

Despite being held to under 200 passing yards vs. the Chiefs, Kyler Murray was a competent QB with an ugly receiving corps. He finished in the middle of the pack in EPA/play and 12th in CPOE. He created a lot on the ground and most of it was planned. Murray had five carries for 29 yards with just 10 of those yards coming on scrambles. He’ll also get to see a Las Vegas Defense without green-dot Denzel Perryman, who was a DNP at practice on Wednesday.

Carr was pushing the ball downfield vs. the Chargers and finished third in air yards/completion and eighth in air yards/attempt. He has a healthier Darren Waller, who had three catches of 20-plus yards, and Hunter Renfrow will have a bigger game without having to see Los Angeles’ Bryce Callahan.

I'm off this total but expect both offenses to look better than last week as the preseason length and lack of snaps for staters could have been an issue for many teams in Week 1.

The Cardinals are 1-6 ATS in their last seven games overall. Find more NFL betting trends for Cardinals vs. Raiders. 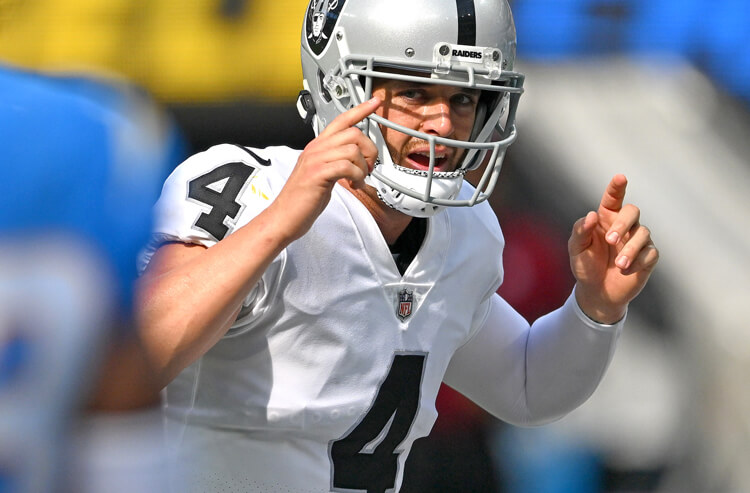