Jets vs Packers Preseason Picks and Predictions: Where is (the) Love?

The Packers will be holding their collective breath around the status of QB Jordan Love in this one, while the Jets will eagerly get another look at rookie Zach Wilson. Our Jets vs. Packers picks and predictions breaks down the QBs' impact and more.

The Green Bay Packers and New York Jets will meet in Wisconsin on Saturday in some Week 2 preseason action. The big question surrounding the contest is the health and playing time for Green Bay’s second-string QB, Jordan Love, who is dealing with a shoulder injury.

New York QB Zach Wilson will see more action than he did in his Week 1 preseason win against the Giants, where he finished 6 for 9 for 63 yards in two series. His new OC, Mike LaFleur, will also be opposing his brother in Green Bay head coach Matt LaFleur.

Here are our NFL free picks and predictions for Jets vs. Packers on August 21.

The Under was 13-3 in the first week of the preseason. Find more NFL betting trends for Jets vs. Packers.

Betting on preseason football blindly is a fool’s game. Quarterback play is insanely important in these warm-up games and getting more series out of teams’ best QBs can go a long way. Saturday’s contest between the Jets and Packers is a perfect example of this, as Aaron Rodgers is likely to sit out and backup Jordan Love, banged up with a shoulder injury, is questionable heading into the weekend. The Jets, however, will give an extended look at Week 1 starter and No. 2 overall pick Zach Wilson.

Last week, the Jets managed just 12 points on offense against the Giants and still covered as 2.5-point favorites. Wilson finished 6 for 9 with 63 yards, no turnovers or sacks, and led two drives for three points against the Giants' backups. This week, new head coach Robert Saleh has said that Wilson will likely see an extra couple of series, which is great news for Jets’ backers as Wilson looked confident in his NFL debut and could see a full half.

The Packers started their preseason with a 26-7 loss to Houston as three-point favorites. Love played the entire first half and managed just one scoring drive in six attempts. He was intending to play three quarters but got dinged up by a late first half sack. He is considered very questionable after not practicing all week. If Love sits, third-stringer Kurt Benkert could draw the start with Aaron Rodgers likely not seeing any preseason action.

Benkert went 8 for 12 versus the Texans with a pick and a lost fumble. The 26-year-old undrafted QB has spent the last three seasons on the Falcons’ practice squad and is a massive downgrade from Love. He will also have to face a New York pass rush that recorded five sacks last week.

Wilson and the Jets won’t likely see any of the Green Bay No. 1’s as Matt LaFleur didn’t dress 30 players in last week’s preseason opener and he doesn’t seem eager to start any of his best players this week.

Wilson will be playing in his first road game, which presents new difficulties for the young QB, but with Green Bay likely playing next to no starters and possibly getting third-string QB play for the majority of the game, it may not be as difficult as usual.

This game opened NYJ +3 but was immediately hammered down to NYJ -2 in 24 hours. We’re siding with the steam on this one and taking the -2.5 even though we’re late to the party.

You won’t meet too many happy preseason Week 1 Over bettors, as the opening slate went 3-13 O/U last week with the three Overs finishing with 40, 39, and 39 points. The average total last week was 35.9 points, with six games closing at 37 or more points. This week, that total is averaging 36.5 points with eight games of 37 or more points.

The Packers and Jets come into Saturday’s warm-up game with the lowest total on the board at 31.5 after opening at 34. Last week, games with totals of 34.5 or less went 2-5 O/U, including New York’s 12-7 snoozer. The books are daring us to take the Over but we’re digging in, even at 31.5.

The Love injury makes it interesting from a total standpoint. If he does play — as he seriously needs these reps — we’d expect his throwing shoulder to be at less than 100 percent. If he does sit, we will get a heavy dose of Brenkert which is probably a win-win for the Under.

The Green Bay offense managed just one score last week and ran for a paltry 2.3 yards per carry on 21 attempts. Love and Benkert never got the offense into the red zone and now Green Bay faces a New York team that held the Giants to 3.7 yards per play on just 44 total plays last week.

Although the Jets have upgraded their offensive mind with the addition of Mike LaFleur, it will take some time to implement a new and progressive offense for New York. The playbook could get bigger for Wilson on Saturday, and that may not be a great thing for a rookie QB looking to keep the chains moving.

As decent as Wilson was last week, the Jets’ O-line and running game were bad. They rotated heavily in the backfield, with six different running backs, but that didn’t lead to any success on the ground as New York finished with 2.4 YPC.

This total of 31.5 is still leaning to the Under and could go even lower after crossing the key number of 33. 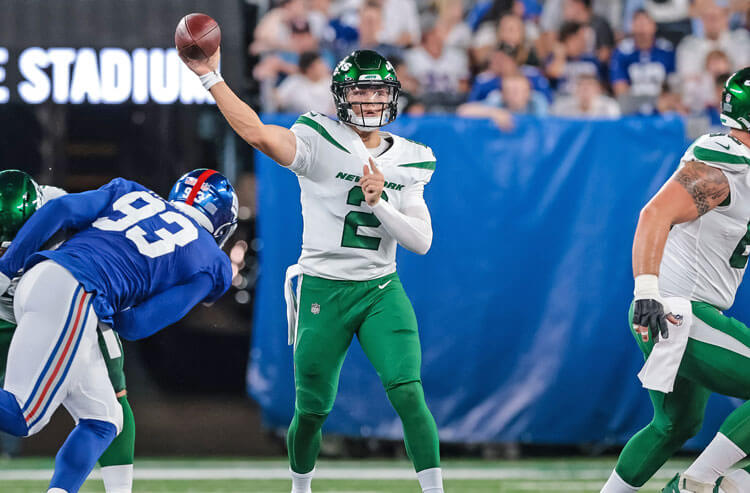 Jets vs Packers Preseason Picks and Predictions: Where is (the) Love?
Provided by