With teams still tussling for position at the top of the Big Ten West, two of them go head-to-head this weekend. Our Wisconsin vs. Minnesota preview suggests the spread may be too high for a game that might stay under 40 points. Read more below.

The Wisconsin Badgers are on a seven-game winning streak but are still fighting for the No. 1 spot in the Big Ten West.

The Wisconsin Badgers are 6-2 in division play and already have a win against the Iowa Hawkeyes. Therefore, Wisconsin knows if they leave Minnesota with a win, they’ll clinch their spot in the Big Ten Championship Game.

Meanwhile, if Minnesota wins this game, they’ll be tied with Minnesota and potentially Iowa for the Big Ten West. However, Minnesota already lost to Iowa earlier this season, 27-22.

With so much chaos in the Big Ten West, here are our picks and predictions for the game between the Wisconsin Badgers and the Minnesota Gophers.

Meanwhile, the total opened at 39 and has stayed steady around that number at most sportsbooks. Use the live odds widget above to track any future line movements right up until kickoff and be sure to check out the full college football odds before placing your bets.

The Badgers are 2-8 ATS in their last 10 games after allowing more than 280 yards passing in their previous game. Find more NCAA betting trends for Wisconsin vs. Minnesota.

Wisconsin vs Minnesota picks and predictions

The Wisconsin Badgers had been destroying competition until last week. The Badgers finally ran into some trouble but manage to pull out a home win against Nebraska, 35-28.

Wisconsin has one of the better defenses in the nation, allowing just 237.7 total yards per game this season and just 64.3 yards per game coming on the ground.

The Badgers’ defense is strong on all levels. Their run defense and pass rush has been fantastic while the coverage unit has also held up extraordinarily well.

Questions remain about the Badgers’ offense. The Badgers average under 400 yards per game but manage to score 27 points per game behind quarterback Graham Mertz, who has only thrown for nine touchdowns and nine interceptions on the season.

Wisconsin isn’t dangerous in the air, but it’s got some real playmakers in the run game including Braelon Allen who has rushed for over 1,000 yards and 12 touchdowns in his freshman season, including 228 yards and three touchdowns in the win over Nebraska.

On the flip side, Minnesota has lost their top three running backs this season. But the Gophers have overcome adversity with seven wins on the season along with another bowl game appearance.

The Gophers aren’t nearly as dominant as the Badgers on defense, but they’ve still held opponents to just 18.7 points per game. The offense for Minnesota is slightly better, despite only averaging 368.1 yards per game with 26.4 points per game.

The offensive line, especially in the passing game, has exceeded expectations this year, but they’ll face a huge test in Wisconsin’s defensive line.

Once the run game stops working, by the second half, you might get a couple of shots down the field from Mertz and Morgan, but overall, the clock is going to tick for most of the game with both teams relying on their run game.

And despite each team running the football, neither will have much success doing it in this game and therefore, I like this game to go Under the short total.

I’m rolling with Minnesota here. The Gophers match up well against Wisconsin and in a game where neither team is expected to reach beyond 20 points, there’s some real value on Minnesota.

It’s never easy to play in Minnesota in the first place. The fans are electric when their team is good.

The reality is, Minnesota has the better offense while Wisconsin has the better defense. That’s going to be an exciting matchup. But also, the Gophers have been solid against the run and should be able to get stops against Wisconsin along with a turnover or two to keep this game tight. 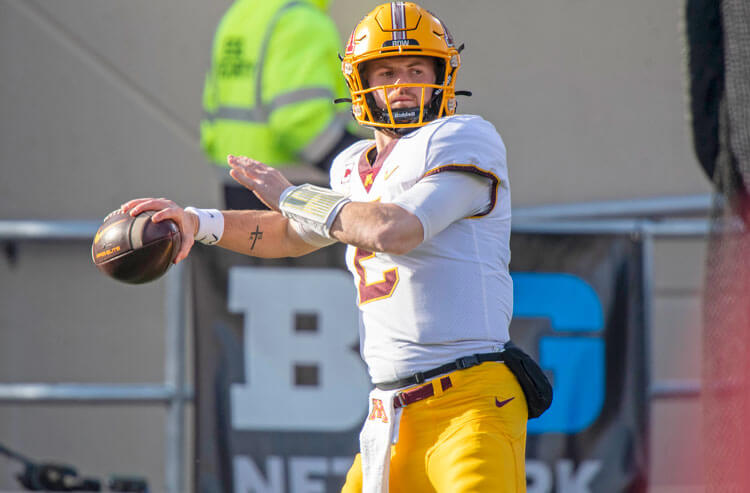