The Spartans may not be in CFP contention anymore, but they're 9-2, and because of their blowout loss to Ohio State last week, enter this game with Penn State as underdogs. Find out why the wrong team is favored in our Penn State vs. Michigan State picks.

The Michigan State Spartans were at an all-time high by the end of October. The Spartans just came off a come-from-behind win against Michigan and were 7-0 on the year. Since that game, the Spartans have lost two of three are now 9-2 on the year.

To finish off the regular season, Michigan State will now welcome a 7-4 Penn State team to East Lansing. The Nittany Lions have really looked lost recently, despite winning two of their last three games. The two wins were against Rutgers and Maryland and the loss was to Michigan. This season, Penn State just isn’t hanging with the big teams in the Big Ten.

Penn State has one last chance to defeat a Big Ten opponent. With a 4-4 record in the Big Ten, can the Nittany Lions finish off regular season conference play with a better than .500 record? Here are our picks and predictions for Penn State Nittany Lions vs. Michigan State Spartans.

Michigan State opened as a .5-point favorite but has since moved to a 1.5-point underdog at a couple of legal sportsbooks.

The total has also changed from 52.5 to 51.5 since opening. Use the live odds widget above to track any future line movements right up until kickoff and be sure to check out the full college football odds before placing your bets.

Spartans are 5-0-2 ATS in their last seven games after allowing more than 450 total yards in their previous game. Find more NCAA betting trends for Penn State vs. Michigan State.

The line movement towards Penn State is kind of shocking. Michigan State is 5-0 at home and despite losing two of their last three games, have nine wins on the year. This team was once in discussions to make the College Football Playoff.

While that dream is certainly gone, Michigan State is still the better team. The defense has allowed 463 yards per game but even with all those yards allowed, it’s held opponents to just 25.5 points per game.

The pass rush has been extremely effective and if there’s one area to rip on Penn State’s offense, it’s the pass protection. There’s reason to believe Michigan State could get pressure on Penn State in this game, no matter who the quarterback is.

At this time, it does look like Sean Clifford will get the start after practicing with first-team reps in preparation for Michigan State. Clifford was injured in last week’s win against Rutgers and didn’t look great before exiting the game.

Meanwhile, Michigan State’s offense has been the far superior one between these two squads. The Spartans are scoring 32.1 points per game and have a reliable offensive line with an amazing running game that is averaging 185.8 yards per game behind Heisman candidate Kenneth Walker III. Walker III has 17 touchdowns on 233 carries this season with nearly 1,500 yards rushing.

While Penn State had success defensively against Rutgers stopping the run, that same success won’t continue against Michigan State. The Nittany Lions allowed 131.4 yards per game on the ground this season and have one of college football’s biggest tests on Saturday, going up against Kenneth Walker III.

Last week, Penn State’s offense stalled under Sean Clifford against Rutgers. The Scarlet Knights have a solid defense, but at home, that’s not how things should go for Penn State.

Meanwhile, Michigan State hasn’t been the best defense this season as it’s allowed 463 yards of offense from the opposition. However, the Spartans are getting big stops in the red zone and on the goal line and limiting points allowed.

Only Michigan State will succeed and therefore, this game will go under the total.

The public is down on Michigan State due to a beatdown from Ohio State last week. It’s an overreaction. Penn State didn’t look great offensively against Rutgers but found a way to win 28-0.

At home, Michigan State is going to be prepared. The Spartans are playing for plenty more when it comes to a bowl game in the future. As a Top 10 team, Michigan State deserves some more respect. It’ll forget about last week’s game, move on, and win the next one. 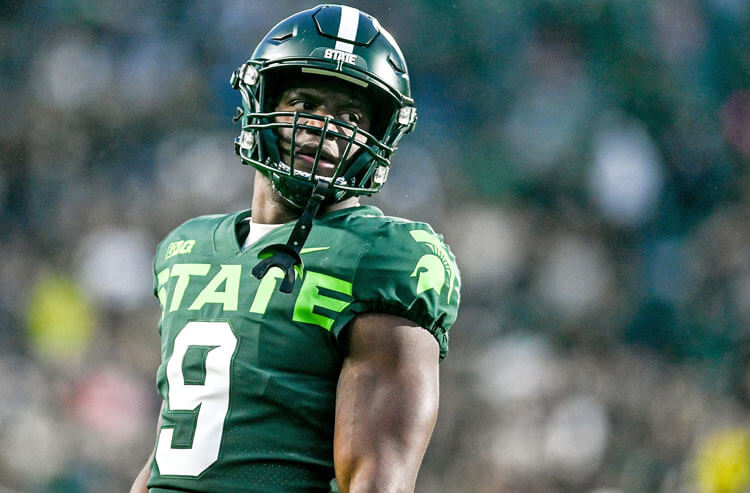