UCLA vs Oregon picks and predictions for November 21

CJ Verdell and Travis Dye join forces with QB Tyler Shough to form a three-headed monster that's spearheading Oregon's run game to 269 yards in each of their first two games.

The Pac-12 was late to the college football party, but the Oregon Ducks, who are the betting favorites to win the conference, are looking to make up for lost time.

The Ducks are probably the Pac-12’s best hope to qualify for the College Football Playoff and have started the year 2-0 SU/ATS, but they’ll likely have to add some style points in this weekend’s matchup against UCLA, where oddsmakers have them as 17-point favorites.

Let’s take a look at our best college football predictions for UCLA vs. Oregon, with kickoff scheduled for Saturday, November 21 at 3:30 ET.

It should be a nice afternoon for football in Eugene. The forecast is calling for partly cloudy skies with temperatures in the mid-40s and minimal wind. Be sure to monitor the gametime conditions with our NCAA football weather info.

Oregon is 4-0 ATS in its last four games dating back to last season, and 5-2 ATS in its last seven meetings against UCLA. Find more NCAA betting trends for UCLA vs. Oregon.

Oregon may have lost star QB Justin Herbert to the NFL, but is still the most talented team in the Pac-12. Head coach Mario Cristobal is just attacking opponents in a new way this season. With the run game.

The Ducks have rumbled for 269 rushing yards in each of their first two games, thanks to running backs C.J. Verdell and Travis Dye, as well as dual-threat QB Tyler Shough.

Herbert’s replacement has thrown for 539 yards with five touchdowns and two interceptions while adding 166 yards and a score on the ground over the Ducks' first two games. This will be a problem for a UCLA defense that allowed an inexperienced Colorado offense to score at will.

Additionally, while the numbers don’t show it through two games, the Ducks have the pieces for an excellent defense, particularly the defensive front seven. The big guys up front will be more than capable of slowing down the UCLA run game and force QB Dorian Thompson-Robinson to beat them with his arm.

UCLA comes in off a nice win over Cal, but the Golden Bears have a dark void where their offense should be, and UCLA lost its previous game to a rebuilding Colorado team. The Ducks should win this one by close to three touchdowns, so it’s nice that we get to take them at this number.

The total for this Pac-12 matchup hit the board at 66 and has already come down two points to 64 as of Friday afternoon. Despite UCLA and Oregon scoring 38 and 39 points per game respectively, there is reason to like the Under.

Oregon is allowing too many yards at this point, but the talent is there to shut down this UCLA offense and it all starts with standout defensive end Kayvon Thibodeaux. If the Ducks defensive line can force Thompson-Robinson into some rushed throws, the junior QB could see the ill effects of his inaccuracy (he is completing just 51.5 percent of his passes).

The other thing to note is both offenses are very run-heavy at this point, which milks the clock and is something all Under bettors like to hear.

While Oregon has the type of offense that’s hard to stop once it gets rolling, it has been a little slow to start this season. The Ducks are averaging 14 first-half points in each of their first two games and I expect UCLA to have a tougher time moving the ball in this one. So, take a hard look at the first half Under which is more than four touchdowns. 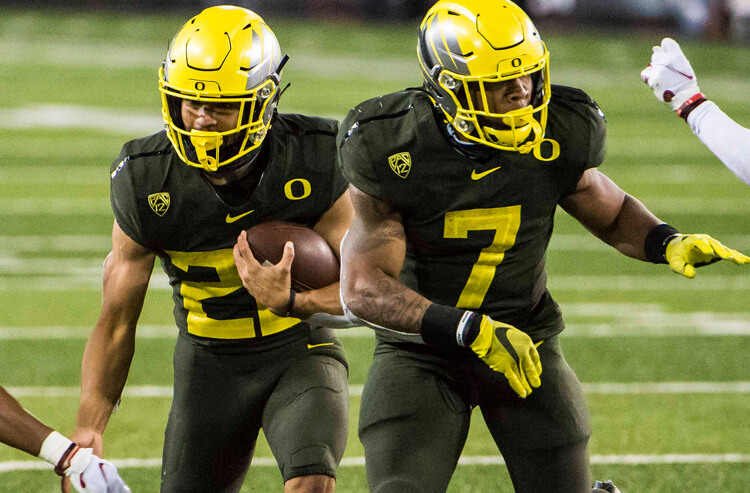 UCLA vs Oregon picks and predictions for November 21
Provided by

Washington vs Arizona Picks and Predictions: The Ultimate Get-Right Game
JD Yonke | Oct 20, 2021
About Us
Contact Us
Careers
Our Team
Brand
Testimonials