The Cornhuskers have been competitive even in tough losses and enter their date with the undefeated Wolverines at 3-3. Check out our Michigan vs. Nebraska picks and find out if we like them to keep it close at home.

What a difference a year makes.

It wasn't long ago Wolverine fans were calling for Jim Harbaugh's head, as Michigan went through another underwhelming season in 2020. Fast forward a season, and Michigan is 5-0 and ranked Top 10 in the country.

The Wolverines have won back-to-back conference games and now travel to face the Cornhuskers. Find out if it's a letdown spot for Harbaugh's crew with our free college football betting picks and predictions for Michigan vs. Nebraska on October 9.

Michigan opened as a 1.5-point favorite but the line is now at -2.5 or -3 at most sportsbooks. Meanwhile, the total hasn’t moved since opening at 52. Use the live odds widget above to track any future line movements right up until kickoff and be sure to check out the full college football odds before placing your bets.

The Under is 5-0 in the Cornhuskers' last five games against teams with a winning record. Find more NCAA betting trends for Michigan vs. Nebraska.

The Cornhuskers lost the first game of the season to Illinois and most thought things would only go downhill from there. But that hasn't been the case, as Nebraska has been really good and competitive against tough competition this season.

After a pair of tough losses to Oklahoma and Michigan State on the road, Nebraska roared back with a 56-7 blowout victory over Northwestern in Week 5.

Through six contests, the Cornhuskers are averaging 504 yards and 32.3 points per game. Nearly half of their yardage gained has come from the ground, rushing for 237.5 yards per game. Quarterback Adrian Martinez has thrown for six touchdowns and just two interceptions, but he’s been helping this offense with his feet more than anything, rushing for nine TDs.

Meanwhile, Nebraska's defense has looked very solid this season, allowing just 322.7 yards and 15.5 points per contest. The Cornhuskers have limited opponents to just 200.5 yards passing and 122.2 yards on the ground, but the rushing defense will need to be at its best if the team is going to have a chance at beating Michigan.

The Wolverines are running the ball a ton this season. The new system that's in place is working as Michigan is averaging 255 yards on the ground per game.

On top of that, quarterback Cade McNamara has been a terrific game manager for Michigan, throwing the ball well when his name is called to make a play down the field. McNamara has thrown for five touchdowns and no interceptions with only 81 passing attempts all year.

Defensively, Michigan has been lights out at stopping the run and has really done well in every defensive category. The Wolverines are allowing 285.8 yards per game, limiting opponents to 170.6 yards passing and 115.2 yards rushing.

While the analytics are showing Michigan should dominate, I’m hesitant to take it that far. Nebraska lost close games to Michigan State and Oklahoma on the road and now it gets to play a tough game at home.

While I like Michigan to get the victory and win by more than 10 points, the Cornhuskers are fantastic in coverage and have a pass rush that can be disruptive at times. McNamara is due to throw a pick and Nebraska can force turnovers on the defensive end — that will help them avoid a blowout here.

With both teams performing well on the defensive end, I’ll roll with the Under in this game knowing that neither team has elite offensive lines. 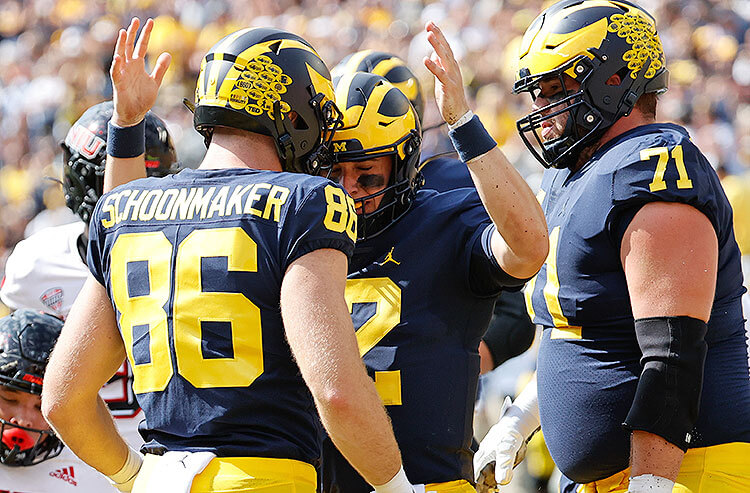