Hurricane Ian's wake has left a delayed game and a fractured state in its wake. As Florida picks up the pieces while Eastern Washington visits, we're predicting heavy hearts for the home side, among other distractions.

Handicapping a mixed game between an FCS team and an FBS blue blood can always be a tricky proposition, but when the Eastern Washington Eagles’ trip to face the Florida Gators becomes something of a standalone college game on Sunday, it is worth delving into.

Of course, we wish this had never been necessary, and the state of Florida finding its way through the damages from Hurricane Ian obviously takes priority. But if the Gators can provide a brief distraction on Sunday, that’s a good thing.

Here are our free college football picks and predictions for Eastern Washington at Florida on October 2.

It’s awkward and perhaps callous, but there is no way to handicap this game without factoring in Hurricane Ian. In addition to moving the game by 24 hours, it will have an effect.

Gainesville may not have taken the worst of the storm, but The Swamp will be more, well, swampy than usual. The bermudagrass natural surface should be a bit spongier, logically speaking. Right there, some of Florida’s speed advantage in this matchup will be mitigated.

It’s hard to imagine 88,548 fans fill The Swamp on such an occasion, when facing an FCS opponent on a day rife with NFL games and a pile of more pressing issues for many fans to worry about. There goes some of Florida’s usual home-field advantage. This will not be the rowdiest The Swamp often can be.

And then there’s the mental side of things. More than 60 players on the Gators roster are from the state of Florida. Not only has the stress, worry, and trauma of Hurricane Ian been in front of the team every day this week, but those players have their families and homes to worry about, as well. The Eagles assuredly wish they did not have this edge, but they should be the more focused of these two teams this week.

Yet, the line remains hefty. When crossing divisions, measuring a game with the usual analytics can create quite varied results, but the most extreme of them would favor Florida by only 28. More conservative numbers would knock that toward three touchdowns.

This game opened at -29.5 at WynnBET, and given mixed games do not become widely available until closer to kickoff, it has not moved.

The Gators may have every motivation to blow out Eastern Washington. An enjoyable distraction would be welcomed by all. But given the certain uneasiness to the week, Florida’s top priority Sunday will more likely be to get out of this game without any trouble or injury.

More tangibly, some credit should be given to the Eagles offense. Yes, they were blown out at Oregon, 70-14, but the scores came in the second and third quarters, when the Ducks were still largely playing their varsity. Furthermore, two of Oregon’s scores came on short fields and a third was a defensive touchdown. A cleaner game from Eastern Washington and/or a conservative approach from Florida should tighten those margins.

Match that 14-point output — not too much of an ask given the Gators’ defense is measurably worse than the Ducks’ — and then Florida needs to score 44 to cover this spread.

The Gators broke 44 once last season, when they dramatically squeaked by FCS-level Samford, 70-52. In 2020, Florida’s offense led by Kyle Trask and Kyle Pitts scored 44 or more four times, and in only one of those games would that explosive attack have covered this 29.5-point spread.

Eastern Washington has shown enough competence to put a couple scores on the board against top-tier FBS opponents. Florida is not one of those.

The Gators do not often score enough to outpace the spread if spotting those couple scores, and when they do, it seems to accompany a defensive collapse.

Exactly five games have spreads bigger than this one this weekend, three of which are mixed ones a la this. Setting aside the blowout Montana should bring to Idaho State and the even bigger one Ohio State will impose upon Rutgers, compare this spread to the Gardner-Webb at Marshall, Citadel at Appalachian State, and Wagner at Syracuse matchups.

To do so, lean a little more on the SP+ rankings than usual, since that methodology at least looks at both the FBS and FCS levels. Florida is better than any of those other three FBS teams in consideration, though by only a field goal of worth when compared to Appalachian State. Meanwhile, Eastern Washington is considered a Top-25 FCS team and is nearly two touchdowns (12.7 points) better than the next of those FCS teams, the Citadel. How convenient, the best comparisons for the Gators and the Eagles in this conversation are playing each other on Saturday.

But the Mountaineers are favored by only 36.5 points against the Bulldogs. (That’s the athletics nickname for the Citadel, in case you were unaware.) Let’s run back that math. Florida is a field goal better than Appalachian State, and Eastern Washington is 12.7 points better than the Citadel. That net of 9.5 points argues one of these spreads should move by 2.5 points.

It’s most likely the one in Florida.

A total is not yet available as of midafternoon Friday, but tapping into a spreadsheet this handicapper helps curate suggests the total should be about 66.0. Let that be your guiding figure for whatever number you see, and then decide how much you think Florida’s focus will be elsewhere and how much matted grass may slow down the Gators.

Florida is 2-2 ATS this season, but its net compared to the spread is -24, largely undone by beating South Florida by only three when favored by 23. Find more NCAA betting trends for Eastern Washington vs. Florida. 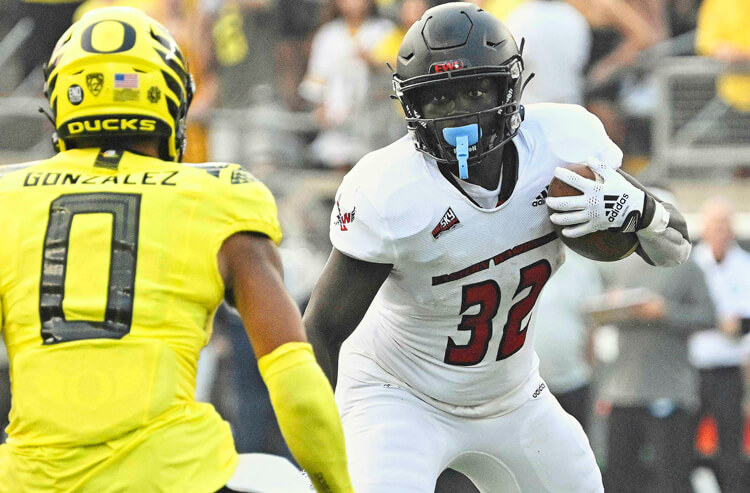