Arizona State's Jayden Daniels has thrown for 359 yards with two touchdowns this year, along with 117 rushing yards. Last year against Arizona, the dual-threat QB ran for 234 yards in a 24-14 win.

It’s the Duel in the Desert as the Arizona State Sun Devils visit the Arizona Wildcats in a Pac-12 showdown on Friday where the winner will walk away with their first victory of the season.

The Sun Devils have only played two games due to COVID-19, and both were heartbreaking defeats, while the Wildcats have dropped four in a row and failed to cover the last three. College football odds give the Sun Devils the edge, setting them as 10-point road favorites.

Here are our best college football free picks and predictions for Arizona State at Arizona, with kickoff scheduled to get underway on Friday, December 11 at 7:00 p.m in Tucson.

It should be a beautiful night in the desert for this rivalry matchup. The forecast is calling for clear skies and temperatures in the mid-50s for game time with minimal wind. Be sure to monitor the gametime conditions with our NCAA football weather info.

The Sun Devils have dominated the Duel in the Desert recently, defeating the Wildcats in each of the last three seasons. But have they shown enough in their two losses to deserve to be laying double digits against their in-state rivals?

Arizona State opened the season with a heartbreaking last-second defeat to USC and then didn’t play again for nearly a month due to COVID restrictions. Then the Sun Devils were handed a second straight heart breaker, giving up the winning touchdown to UCLA with a minute to go in regulation.

The Sun Devils have moved the ball well in their two games, particularly on the ground. Dual-threat quarterback Jayden Daniels leads the way, as the sophomore signal-caller has thrown for 359 yards with two touchdowns and one pick. He also has another 117 yards and a score on the ground. And last year against Arizona he ran for 234 yards in a 24-14 win.

Daniels and the Sun Devils will have the chance to rumble once again, facing a Wildcats defense that is giving up an eye-popping 273.5 rushing yards per game.

On offense, Grant Gunnell was doing a decent job of replacing Khalil Tate under center for Arizona, but he is doubtful to play this game with a shoulder injury he suffered against UCLA. Backup Will Plummer is completing 53.7 percent of his passes and has no touchdowns and three picks.

It’s hard to fade a double-digit home underdog in a rivalry game. But the Sun Devils have the better quarterback, run game, and slightly better defense. Let’s lay the points.

The total for this matchup is sitting at 55 as of Monday night and with the game trending towards the Under, it may be a touch too high.

Losing Gunnell was a big blow to the Wildcats. The sophomore was slinging it all over the field and while the Wildcats weren’t able to win, they averaged 28.5 points in games he finished. Now, the Wildcats have scored just 23 points in the last two games and face an Arizona State defense that is better than the numbers say—and it showed that a bit against UCLA.

Meanwhile, the Sun Devils have had trouble punching the ball across the goal line in their two games this season, averaging just 22.5 points per contest. ASU should find a little more success in this matchup, but not enough to have us leaning towards the Over.

When Arizona does score, it has been in the first quarter. The Wildcats average 6.0 points per game in the opening frame this season and 8.5 points in the first quarter when playing at home—that includes 17 first-quarter points over the last two weeks. The Wildcats come in amped up for this rivalry game and could start strong before tailing off, making their first-quarter team total a little low.

Did you know that if you parlayed today’s NCAA Arizona State vs. Arizona picks, you could win $64.71 on a $10 bet? 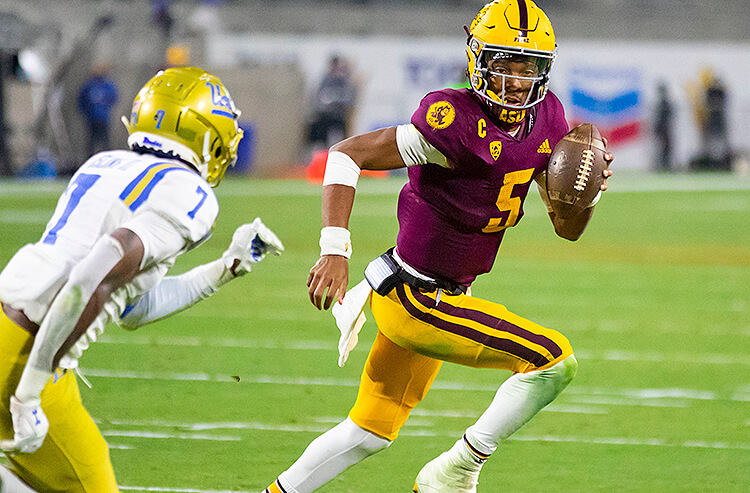 Arizona State vs Arizona Picks and Predictions December 11
Provided by