Bracket Prediction: Rohit Ponnaiya Picks Kansas to Win it All 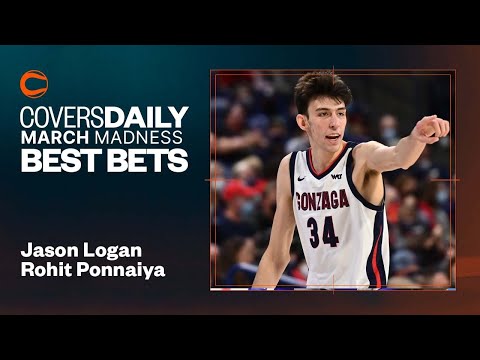 Covers' first official March Madness bracket prediction for the 2022 NCAA Tournament is ready to download and use.

Our first bracket predictor, Rohit Ponnaiya, has done his research, looked at March Madness odds, and has made the picks so you don't have to.

Download his filled-in bracket below and read on for analysis and reasoning behind his picks. 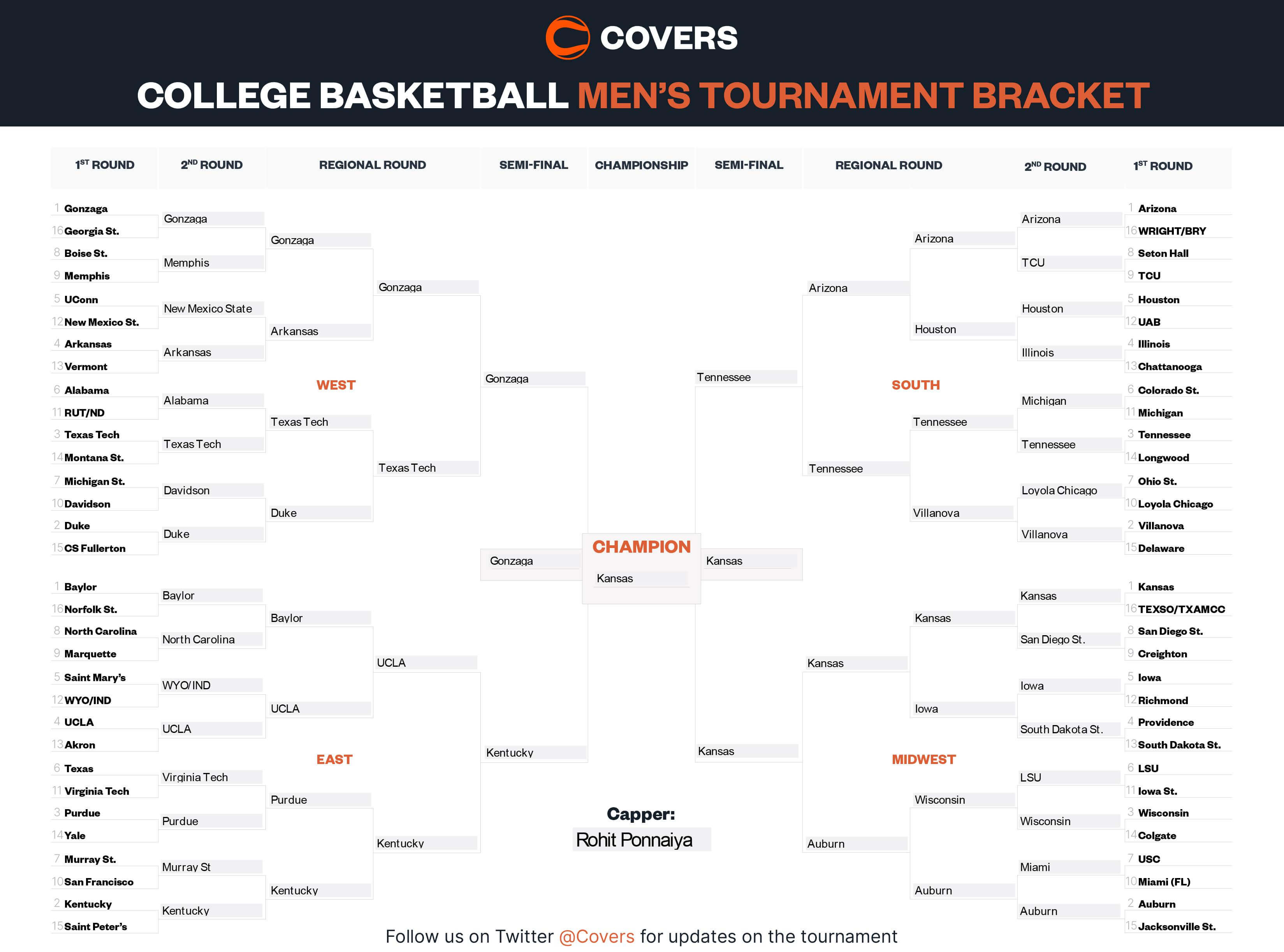 Use this bracket prediction to help you make picks on your own bracket for one of the many free bracket contests available for March Madness, such as the bet365 $6 million challenge.

The Jayhawks have a lot of things going for them as they head into March Madness after an impressive Big 12 Tournament title run. They're strong on both ends of the floor, talented, deep, and experienced, and they have one of the best coaches around in Bill Self.

The No. 1 seed Arizona Wildcats are an ultra-talented squad with incredible length but I'm not sure they would be able to beat Tennessee in the Elite 8. The Vols are one of the top defensive teams in the nation, are hitting their stride at the right time after cruising to an SEC Tournament title, and we've seen them grind down a highly-ranked opponent with size when they shut down Kentucky twice within the last month.

I also don't see last year's national champions making it past the Sweet 16 with Baylor simply not as good as they were in 2021. The Bears turn the ball over way too much and are near the bottom of the country in free throw percentage. Size and energy have also been an issue after losing Big 12 co-Defensive Player of the Year Jonathan Tchamwa Tchatchoua to a season-ending injury last month.

See which teams have the best odds to make the Final Four.

South Dakota State might be a No. 13 seed but there's a reason that oddsmakers have them installed as a slim 2-point underdog in the opening round versus Providence. The Jackrabbits enter the tournament with 21 straight wins after cruising to the Summit League Tournament championship last week. They are the No. 1 team in the country in offensive efficiency and also lead the country with a sizzling 44.2 3PT% — more than 40 points higher than second-place Colgate.

The Aggies might be 7-point underdogs against the Huskys in the first round but this should be a very competitive game between two similarly built squads. The Aggies have terrific size and are 19th in the country in rebounding rate while ranking 13th with a 39.1 opponent FG%.

I expect the Indiana Hoosiers to take care of business in the First Four and take on the Saint Mary's Gaels in the opening round. Indiana will be a very tough out for a Gaels team that (with the exception of the Zags) hasn't faced the strongest competition night-in and night-out in the WCC.

The Hoosiers are stingy on the defensive end of the floor, cut their teeth in the highly competitive Big Ten, and seem to be peaking at the right time after almost making their conference tournament finals. And they'll have the best player on the floor in Trayce Jackson-Davis who averages 18.1 ppg, 8.2 RPG, and 2.4 BPG, with a 58.9 FG%.

Learn more about the 12 over five trend.

Truth be told I expect there to be at least one or two double-digit seeds advancing into the Sweet 16 (maybe even three or four given the parity around the country this year). But I have a hard time figuring out which teams have the best chance and backing a lower-seeded school to advance far and whiffing can be a big missed opportunity in any bracket prediction.

On average only about 2.3 double-digit seeds advance past the second round so I'd rather play it safe and try to nail as many of the Sweet 16 as possible with higher-seeded squads that have a stronger possibility of making it even further.

Check back on our bracket predictions hub on Wednesday for Jason Logan's bracket.

Our process for NCAA Tournament picks

Want more smart tournament picks? Our March Madness picks hub has details on every game of the tournament, best odds for the matchups, and links to analysis for every round.

Our process will go like this. We have four betting analysts — one for each region — making picks on every single game of the tournament. 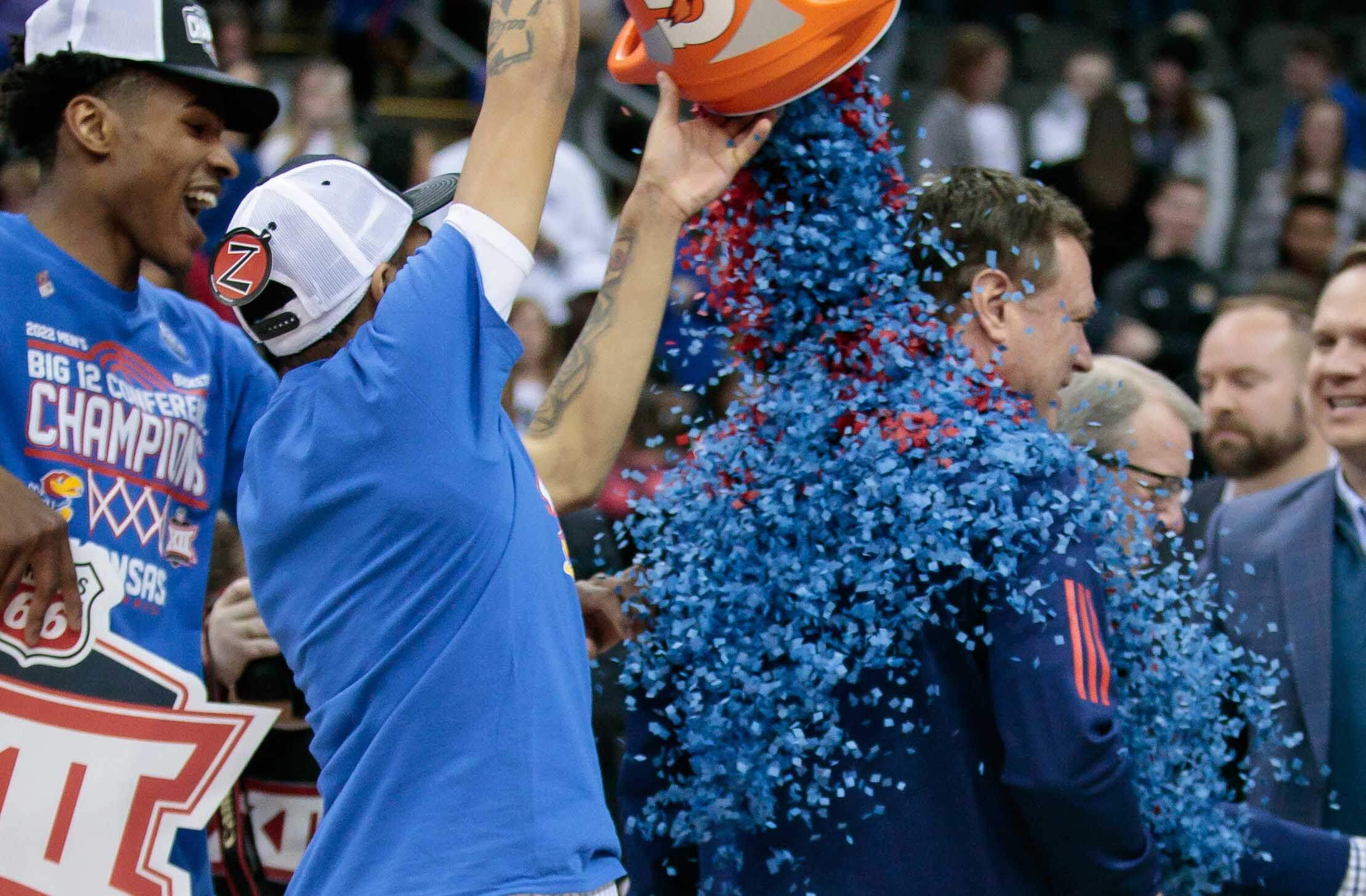 Bracket Prediction: Rohit Ponnaiya Picks Kansas to Win it All
Provided by