Looking for some new betting games and pool ideas to spice up your March Madness? From NCAA Squares to the Crying Pool, there's something here for everyone.

College basketball betting season and March Madness are here. We all know about the standard March Madness Bracket Challenges, but sometimes you are looking for extra zest.

Like adding bacon bits to a salad or extra bacon on your BLT. Something to make it even better. That’s why we’re giving you a few more college basketball pool ideas that you can start with your crew.

My friends and I have been participating in this league since 2006. We named it the Hank Gathers Memorial because he was awesome and could score buckets, everything that we were looking for out of a league that rewards scoring.

The league is super simple: Eight owners draft eight players each from teams in the tournament, snake draft, done via email. The owner whose team scores the most points in the tournament wins (so you want to take players that score on teams that advance in the tournament). We do the stats manually via a spreadsheet, which isn’t hard because there are only 64 total players and many of them get knocked out early.

I recommend filling in the players drafted in the spreadsheet as you go. It makes those annoying “has he been drafted yet” emails go away and allows for you to really lay into someone if they draft someone who is already drafted.

This league was called the Big Boys League when I was first introduced to it during my previous job selling online advertising. Once I left, I took the format of the league with me and started my own pool. This is also called the “Thomas Hill Crying Pool” because I laugh every time I saw Thomas Hill crying after Christian Laettner made one of the most memorable shots in college basketball history. It’s my way of saying “never forget”.

This college basketball pool can have an unlimited number of teams and once again you’ll be doing the stats manually. In this one, you get points based on the seeding of the winning team. For example, every time No. 1 Gonzaga wins you only get one point, every time No. 7 UCLA wins you get seven, etc.

Each owner selects six teams, two of which you can put a double value on. That means each of their victories counts for double their seeding (so if you doubled UCLA you’d get 14 points).

Since Gonzaga winning it all would only get you six points overall, the Bulldogs aren’t an attractive option. This is especially true when you consider that a No. 12 seed gets 12 points per win. One victory by them is the equivalent to Kentucky winning it all and you doubling them. Catch my drift?

The game now becomes “can you guess the right upsets” and if you’re confident enough, “can you double them?” It can be a very boom-or-bust game (but it’s a ton of fun).

As the tournament gets into the later rounds, winning squares pay out more, with the championship game being the big dog. It’s a great way of always having action on a game and keeping interest until the final horn.

I prefer to reward people who are willing to go out on a limb and call upsets in their tournament brackets. Everyone is going to be taking Gonzaga, so you’ve gotta spice it up somehow. There are a few different versions of the Upset Special Bracket Challenge but here’s the one that I’m doing this year:

This format puts an emphasis on the early rounds, which I think is the best part of the tournament. It’s a ton of fun when you call an upset and then you get rewarded for it.

Then, of course, there is the King of Covers College Basketball playoffs content. Pick against the spread and the Over/Under for every game of the tournament and battle other Covers community members for the top spot on the leaderboard. There is more than $3,500 in cash and prizes up for grabs during March Madness. 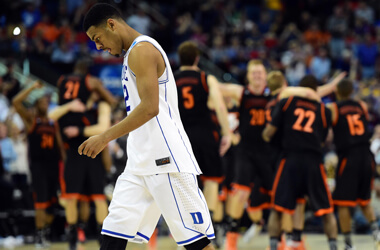