Golden State wants to rejoin the league's elite this season and it'll get a big first test, visiting a new-look L.A. team on opening night. Find out how it will play out with our Warriors vs. Lakers picks.

The last two NBA champions to emerge from the Western Conference will clash on opening night, with the Los Angeles Lakers hosting the Golden State Warriors.

In a marquee matchup, NBA betting lines have L.A. and its revamped roster as 3-point favorites.

Find out how we like it to play out with our free NBA picks and predictions for Warriors at Lakers on October 19.

The Lakers hit the board as 4.5-point favorite on the lookahead line, set back in the summer when the schedule was released. That spread climbed as high as -5 but action on Golden State over the past five days has driven this spread to as low as L.A. -3 at some sportsbooks. The total came out at 230.5 back in August and has also slimmed, sitting at 226.5 points as of Tuesday morning.

If you're signing up for a new sportsbook for 2021-22 NBA season, here are two of the best welcome bonuses available:

The Warriors are 2-7 ATS in their last nine games as road underdogs. Find more NBA betting trends for Warriors vs. Lakers.

Warriors vs Lakers picks and predictions

Much is being made of the Lakers’ preseason struggles, finishing the exhibition slate 0-6 including two losses to the Warriors in those tune-up tilts. But for LeBron James and this legion of veterans, the preseason holds about as much weight as LeBron’s Oscar campaign for Space Jam 2.

What we did see from Los Angeles in the preseason, which had stars coming in and out of the lineup, was a faster gear on offense. This Lakers team loves to get out in transition and has a brand-new motor driving that attack in Westbrook, one of the best players at pushing pace and getting inside the paint.

Westbrook is a massive upgrade from Dennis Schroder in transition and takes some of the offensive initiation off James, allowing LeBron to play within the offense, finish plays and find space. As great as Westbrook is, however, he’s not the shooter L.A. so desperately needed, leaving the Lakers to lean on some sub-par guards to hit 3-pointers.

If Golden State is going to stay in this game, it will be because of its tempo and 3-point threats. The Warriors are still awaiting the return of Klay Thompson, but the injury to second-year center James Wiseman is the one deficit they’ll feel the most versus Los Angeles tonight.

Coach Steve Kerr knows he can’t bang with this huge Lakers lineup, leaving him with Kevon Looney as his one true big. Expect Kerr to roll out a smaller crew, with Draymond Green in the middle, hoping to put the lumbering Lakers on their heels and stretch the floor in the halfcourt.

The big issue – in size and seriousness - is that L.A.’s length can dominate in the paint, forcing the Warriors to inbound the ball, which slows tempo. There won’t be many rebounds that the Lakers don’t wrangle, which means Golden State has got to shoot a very high percentage – tough to do while working through the rust in Game 1 of the schedule – and won’t get many chances to grab a board and hit the outlet pass in transition.

Despite contrasting records in the preseason – Golden State 5-0, Los Angeles 0-6 – these teams ran similar tempos in the exhibition slate, ranked No. 1 and No. 2 in pace rating. They went 1-1 Over/Under in their two preseason meetings, with L.A. wrapping the preseason 4-2 O/U and the Dubs going 3-2 O/U.

Steve Kerr is putting an emphasis on ball movement and energy, looking to guys like Jordan Poole and Andrew Wiggins to work around Green and Stephen Curry for major contributions on offense – especially until Thompson returns closer to Christmas.

Golden State no longer has lengthy perimeter defenders like Kelly Oubre Jr. and Kent Bazemore (now on the Lakers), and desperately misses Wiseman protecting the rim and changing shots. Last year’s team, which ranked No. 5 in defensive rating, still allowed an average of 60 points in the paint per game in its three regular-season run-ins with the Lakers – third-most in the NBA.

Tuesday’s opener will see Los Angeles trading high-percentage dunks and layups for triples from the Warriors on the other end. It will make for a high-scoring finish and a fun way to open the 2021-22 NBA season.

Plenty of people want to cut open this L.A. roster and count all the tree rings as a reason why the Lakers can’t survive to see the NBA Finals. Those people may be right, but we’re never going to get this aging L.A. team as spry as it is tonight. And that’s all we care about for this game.

James, Davis, Westbrook and the bulk of those vets enter the regular season healthy and ready (and not still aching from a playoff bubble run like L.A. was during last season's quick turnaround). There’s a lot more depth on this Lakers team compared to last season, especially around the basket. Dwight Howard’s return is bigger than you think, and alongside AD, DeAndre Jordan, and LeBron, Los Angeles is going to beat up on teams over the course of 48 minutes – on both ends.

This opening night showcase will be close on the scoreboard for most of the game, but that investment in physicality will start to pay dividends in the fourth quarter as the Lakers pull away.

Did you know that if you parlayed today’s NBA Warriors vs. Lakers predictions and picks in a single-game parlay, you could win $26.14 on a $10 bet? 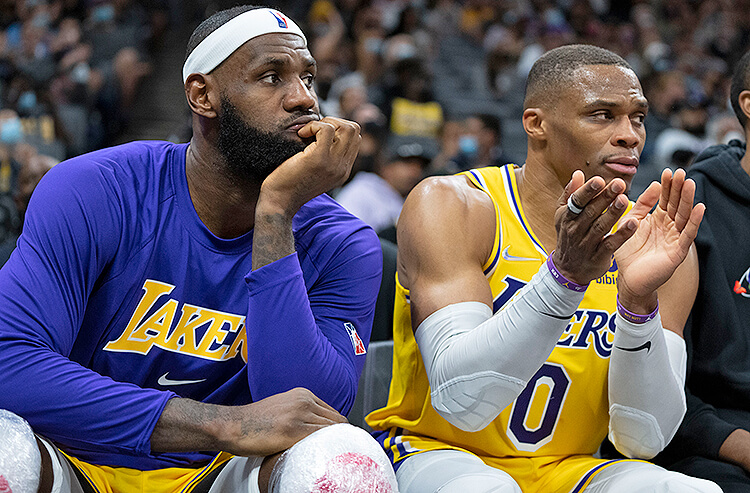