Warriors vs Lakers Picks and Predictions: Lakers Send A Reminder to the NBA

Anthony Davis has recently re-asserted himself as the superstar the Lakers need him to be, averaging 26 points and 8.3 rebounds over the final five games of the season.

LeBron James may want the creator of the NBA play-in tournament fired, but basketball bettors would like to buy that person a beer.

It’s only right with the Western Conference play-in giving us a marquee matchup between the No. 7 Los Angeles Lakers and the No. 8 Golden State Warriors on Wednesday. The NBA betting odds have the Lakers set as home favorites, but the spread is shrinking with action on the underdog Warriors. Los Angeles won two of the three meetings with Golden State this season (2-1 ATS).

Here are our free NBA picks and predictions for Warriors vs. Lakers on May 19.

Los Angeles went up as a 5-point favorite at TwinSpires Sportsbook, spent time at -5.5 and is up to -6 at 9 p.m. ET, about an hour before tipoff against Golden State. Ticket count and money are both in the 3/1 range on the Lakers, in a very well-bet play-in game. "It's already dwarfed both games yesterday combined," TwinSpires trading analyst Zachary Lucas said. "The Lakers are our biggest liability of the night." The total tumbled from 222 to 217.5, with 54 percent of tickets on the Over and 64 percent of money on the Under.

The Warriors are 2-7 ATS in their last nine games as road underdogs. Find more NBA betting trends for Warriors vs. Lakers.

For all the bad press the Lakers get by finishing seventh in the West, this team enters the postseason on a five-game winning streak (three without LeBron) that included victories over playoff-bound teams like Phoenix, New York, and Indiana.

Headlining those wins was the return to form of Anthony Davis (26 points per game in that span) but also steady support from L.A.’s backcourt, which is the key to the team’s playoff success. Los Angeles’ guards, while not the focal point of the offense behind James and Davis, finished that five-game stretch shooting 47 percent from the field, including a 41 percent clip from beyond the arc.

Guys like Kentavious Caldwell-Pope, Talen Horton-Tucker, and Dennis Schroder (who missed two weeks due to COVID-19 protocols) stepped up and gave this backcourt bite, lifting Los Angeles’ offensive rating to 115.8 in those five games — compared to just 109.8 on the season (24th).

The Purple and Gold need those contributions from the guards to continue — especially the long-range luck — in this matchup with the Warriors, who enter the play-in tournament on a six-game tear and have gone 15-5 SU and ATS in their last 20 contests.

Golden State scored 118.3 points a night during that furious finish, picking up an average of almost 51 points per game from beyond the arc. However, this Lakers squad hangs its hat on defense and allows foes to connect on only 35 percent of their shots from distance.

What’s more, L.A. did a fine job limiting those 3-pointers in the three matchups with the Dubs this season, holding the Warriors to 30.6 percent shooting from outside in those contests, including checking Stephen Curry to a 9-for-26 count from 3-point land.

Davis will have his way inside against an undermanned Warriors frontcourt and a one-legged LeBron is still better than 99 percent of the league. With some help from the guards and this spread ticking down, we like L.A. to remind everyone just who the reigning champ is.

Curry’s offensive explosions have grabbed all the headlines — and MVP praise from LeBron himself — but it’s the Warriors’ work on defense that made the difference, ranking No. 1 in the league’s advanced defensive rating (106.6) during that 20-game stretch.

Golden State is down some bigger bodies, which has forced Steve Kerr to roll out a smaller lineup. But that’s improved the Dubs’ mobility and has made them one of the better defenses versus transition — something the Lakers do thrive in when LeBron is at the wheel.

Defensively for the Lakers, they’ll use their size to plug the paint and dominate the glass. Los Angeles has a lot of beef to throw out there — Davis, Andre Drummond, Marc Gasol and Montrezl Harrell — and plenty of rim protection, so they can cheat and pressure the perimeter threats knowing a shot blocker is behind them.

Anthony Davis has emerged as the true star of this Lakers team during the home stretch of the season. After a slow return from a calf injury, Davis erupted with LeBron in and out of the lineup and averaged 26 points and 8.3 rebounds in the final five games of the sked.

Davis faces a smaller Warriors frontcourt that gets beaten up on the boards, boasting a rebound rate of just 47.8 percent while giving up 10.7 offensive rebounds per game — second-most in the NBA. Davis played the Dubs only once this season, scoring 17 points and pulling down 17 rebounds on January 18.

Golden State just gave up 16 boards and 29 points to Memphis’ mobile center Jonas Valanciunas in the season finale. The game before that, New Orleans outrebounded the Warriors 51-46, including 12 offensive rebounds. 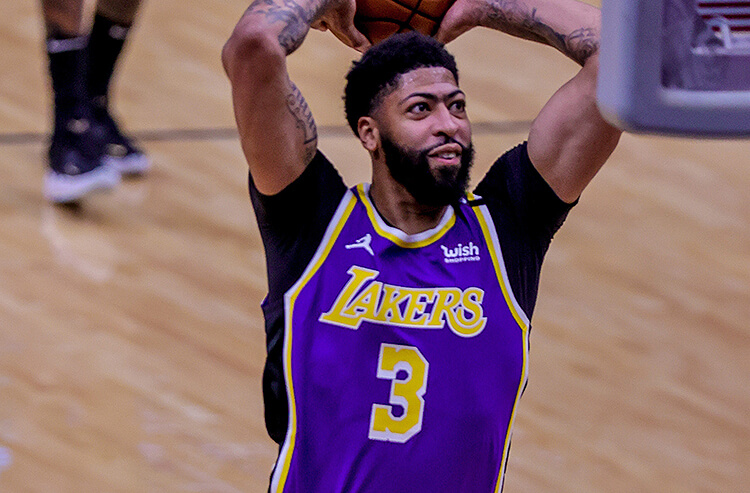 Warriors vs Lakers Picks and Predictions: Lakers Send A Reminder to the NBA
Provided by