Warriors vs Jazz Picks and Predictions for January 23

NBA betting on Saturday is capped off by the Utah Jazz looking to extend their winning streak to eight games when they host the Golden State Warriors at Vivint Smart Home Arena.

The Warriors were playing good basketball before a loss to the Knicks, so they are probably feeling good about where their game is right now, too. With that said, NBA odds opened with the Dubs as 6.5-point underdogs.

Continue reading our Warriors vs. Jazz picks and predictions, with tip-off set for 9:00 pm ET,  in order to get our read on how this game will play out.

The Warriors are 5-2 ATS in their last seven games as underdogs. Find more NBA betting trends for Warriors vs. Jazz.

FanDuel peggegd Utah a 6.5-point favorite on Friday night's opening line, moved to -7.5 this morning and then to 7 mid-afternoon, where the line remains at 6 p.m. ET, three hours ahead of tipoff. Underdog Golden State is taking the bulk of the action, at 61 percent of bets and 60 percent of money on the spread. The total initially backed up from 225 to 224.5, but it's now up to 228, albeit not on overwhelming betting splits: the Over is getting 60 percent of tickets/64 percent of money.

The Warriors had won – and covered – in two straight games before losing to the Knicks by 15 on Thursday. That means Golden State has had a whole day to sit on a bad loss, so this group will be fired up for an opportunity to get back in the win column. That’s especially true of Draymond Green, who is arguably to blame for the Warriors’ most recent loss. Green was ejected from the game after getting two early technicals – albeit one was given to him erroneously for yelling at his own teammate – and he’ll be looking to make up for it against Utah.

This Jazz team is scorching hot right now, as they are 7-0 SU and ATS in their last seven contests. On paper, this should be another win for Quin Snyder’s group, but Golden State should be able to keep this somewhat close—even if the team can’t come away with the outright victory.

One thing to keep an eye on in this game is the play of the Warriors’ wings, Andrew Wiggins and Kelly Oubre Jr. Wiggins has surprisingly been very good this season, averaging 17.7 points per game on 45.2 percent shooting from the floor and 39.7 percent shooting from three. Meanwhile, Oubre got off to an absolutely brutal start to the season but he has since become more comfortable.

If the Jazz are vulnerable somewhere defensively, it’s on the wing, where Bojan Bogdanovic is easily the team’s weak link. The Warriors will look to get their forwards going in this one, and they’ll also do their best to get Steph Curry some pick-and-roll opportunities with Bogdanovic as the hunted defender.

The Jazz turning their season around is mostly a product of their play on the defensive end—and they are currently Top 7 in defensive rating.

Meanwhile, the Warriors are in the Top 12 in defensive rating over their last five games. That’s an encouraging sign for Golden State, as the team really struggled to defend earlier in the year.

With both of these groups playing well defensively, it’s likely this game goes Under the total. The Warriors also have trouble scoring when Curry goes to the bench, which is another reason why it’s hard to imagine the scoring getting out of hand here.

As previously mentioned, this is a pretty good matchup for Wiggins, who should see some extended time with Bogdanovic guarding him on the perimeter.

Bogdanovic is a smart defender, and he does his best to be in the right spots, but he is definitely a slow-footed wing. That means that Wiggins should be able to get by him, especially if he is hitting some jumpers and forcing Bogdanovic to close out on him.

Honestly, even if Wiggins sees time with Royce O’Neale covering him, he’s good enough to get by and get himself some good looks in the paint. 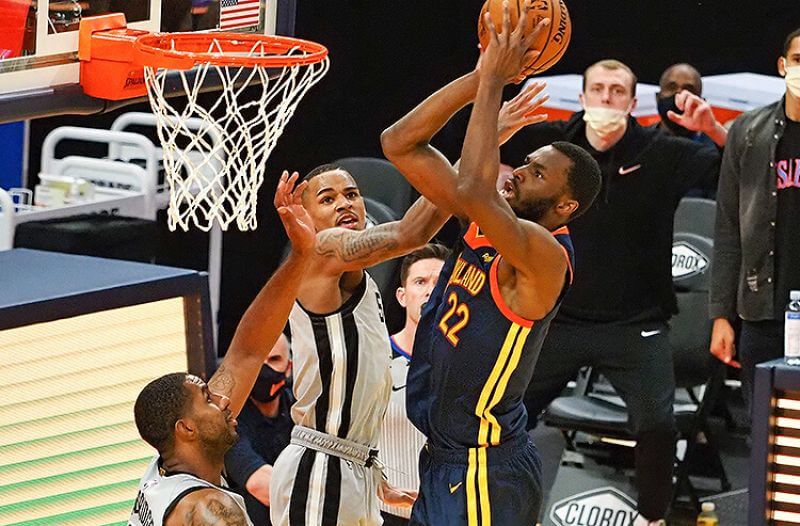 Warriors vs Jazz Picks and Predictions for January 23
Provided by