Phoenix is on another long winning streak, but it's without some key bodies and laying lots of points to Minnesota, who isn't as listless as in seasons past. Find out why this spread might be too much with our Timberwolves vs. Suns picks.

The Phoenix Suns will be putting their eight-game winning streak on the line when they host the Minnesota Timberwolves at the Footprint Center on Friday. Devin Booker could be fired up to go out and put on a show in this one, as he was snubbed as an All-Star Game starter for the Western Conference.

Will Phoenix take care of business against Minnesota tonight? Keep reading our Timberwolves vs. Suns NBA picks and predictions for January 28 to find out.

Phoenix was originally laying 9 in this meeting with Minnesota, but the Timberwolves are now getting 8 or 8.5 across all sportsbooks. The total, meanwhile, opened at 230.5 and is now as low as 229.5 in some places.

The Timberwolves are 7-1-1 against the spread in their last nine games coming off a straight-up loss. Find more NBA betting trends for Timberwolves vs. Suns.

Timberwolves vs Suns picks and predictions

The Suns are extremely hot right now and they are going to feel good about their chances of beating the Timberwolves, despite being without some key players in this game. The problem, however, is that this is a ton of points to be giving to a Minnesota team that has flown under the radar all season. Even if the Wolves end up being without Russell in this game, the team has enough to avoid losing big in this game.

For starters, the Suns are missing their two best centers, which means that Karl-Anthony Towns should be able to feast in this game. Bismack Biyombo has played really well for the Suns this season, but he’s no match for Minnesota’s star. Towns had 31 points and 12 rebounds against the Golden State Warriors last night, and it wouldn’t be surprising if he turned in a similar performance in this game.

Minnesota can also count on Anthony Edwards to score, as the young wing has dropped at least 25 points in each of the last three games. Edwards will have to deal with Mikal Bridges in this game, but he should still be able to produce here. He also only scored nine points the last time these teams faced one another, so he’ll be out for revenge this time around.

Minnesota just needs to find a way to contain Chris Paul and Booker in this game, and the team should be able to do a decent job on them. The Timberwolves are 11th in the league in defensive rating this season, and they are especially good in half-court settings. That’s where the Suns like to do most of their damage.

While these teams boast a ton of offensive talent, they also play some of the best defense in the league. The Suns are second in basketball in defensive rating this year, while the Timberwolves are 11th in the league. Both of these teams pride themselves on getting stops, and that’s part of the reason the two of them combined to score only 195 points when they met on November 15.

The Under also happens to have hit in three of the last four games that the Suns have played coming into this one. On top of that, the Under is 6-3 in the last nine meetings between the Timberwolves and Suns.

One last thing to note with the total is that the Under is 8-2 when Phoenix is coming off a game in which they scored 105 or fewer points. The Suns beat the Jazz, 105-97, on Wednesday.

The Timberwolves hung around in a nine-point loss to the Warriors last night, but Steph Curry and Klay Thompson combined to knock down 11 threes in that game. Phoenix is just as good as Golden State in many ways, but the Suns don’t have that same ability to just quickly explode from behind the three-point line. With that in mind, it’ll be harder for Phoenix to pull away from Minnesota in this game.

The Suns would have had been in much better shape for a matchup like this with Ayton on the floor, as he’s just a different type of athlete than Biyombo and he has what it takes to compete with Towns. Without him, Minnesota should be able to play through its star and really hang around here.

Did you know that if you parlayed today’s NBA Timberwolves vs. Suns predictions and picks in a single-game parlay, you could win $26.45 on a $10 bet? 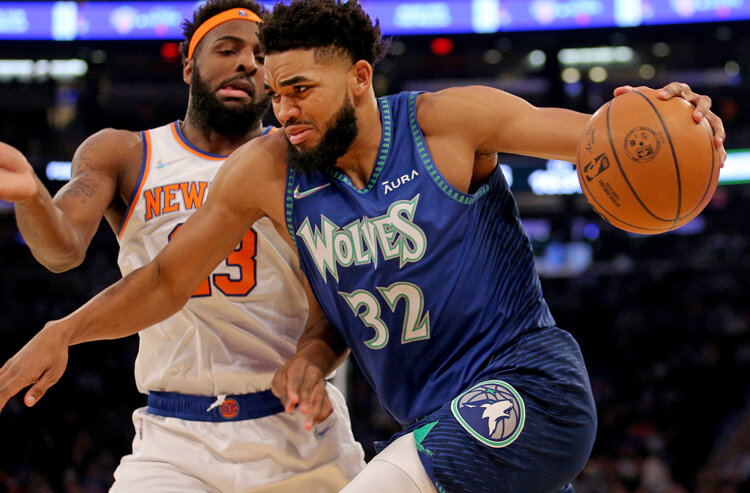