Bulls vs Spurs Picks and Predictions: Chicago Tramples Spread on the Road

Chicago's down some key guards, but has the offensive punch to overpower a San Antonio team that's looked lost for most of this season. Can Chi-Town win outright? Find out with our Bulls vs. Spurs NBA betting picks.

The banged-up Chicago Bulls look to stay near the top of the Eastern Conference standings as they head to Texas to take on the San Antonio Spurs on Friday night.

Oddsmakers are expecting a close contest with NBA betting lines opening the Bulls as slim 1.5-point road favorites before jumping the fence to install the Spurs at -1. Here are our best free Bulls vs. Spurs NBA picks and predictions for Friday, January 28, with tipoff at 8:30 p.m. ET.

The line for this game opened with the Bulls at -1.5 with the Over/Under at 228. Early money has come in on San Antonio and the Over, shifting the line to favor the Spurs at -1 with the total up to 231.5. When these teams previously faced off last March, the Spurs beat a very different Bulls team 120-104, covering as 14.5-point home faves.

The Spurs are 0-6 ATS in their last six games versus a team with a winning straight-up record. Find more NBA betting trends for Bulls vs. Spurs.

Bulls vs Spurs picks and predictions

The resurgent Bulls are still in second place in the Eastern Conference standings with a 30-17 record despite a 1-6 stretch a few weeks ago. Injuries played a big role in that slide with starting guards Zach Lavine and Lonzo Ball, along with key reserve Alex Caruso, all sidelined.

While Ball and Caruso will be out until March, LaVine returned to the lineup earlier this week and led Chicago to wins against Oklahoma City and Toronto.

The Spurs have gone just 4-13 SU over the last month and are 5-11 ATS in their last 16 games. The Spurs can't blame their recent play on injuries, they just aren't good. San Antonio is 23rd in the league in net rating since December 27, shooting just 44.7 percent from the field and allowing 113.5 points per game over that span.

Even without Ball and Caruso, the Bulls are clearly the more talented team. LaVine and All-Star starter Demar DeRozan combine for 51.3 ppg, while Nikola Vucevic controls the paint with 16.6 ppg and 11.4 rpg. That's simply too much for a struggling Spurs team that needs Dejounte Murray to carry them on a nightly basis. Back the Bulls.

The Bulls have taken a step back defensively without Ball and Caruso, but this total still looks too high. Chicago has seen a total of 228 or higher just once this season: two weeks ago against a high-powered Nets offense featuring Kevin Durant, James Harden, and Kyrie Irving. Suffice to say, San Antonio isn't quite as capable of filling up the hoop.

While the Bulls have plenty of scoring options, they play at an average tempo and rank 10th in the league with 110.4 ppg. That number drops to 107.8 ppg on the road, while the Spurs are 1-5 O/U in their last six games at home.

With this O/U being set so high, the Spurs' team total is at a whopping 116.5. That's pretty wild when you consider that they've gone above that number just four times in their last 17 games, averaging 109.2 ppg over that span. Of those four times they scored more than 116 points, two of them came against the Rockets, who are the worst defensive team in the league, one of them came against the lowly Thunder and the other happened in overtime.

Go against the line movement and take the Under.

It was a bit surprising to see the Bulls open as such slim favorites in this one and it was even more shocking to see the line move against them. Yes, they have a few key injuries, but this is still a team near the top of the league standings and has its three best offensive players ready to roll.

San Antonio is well outside of the playoff picture and has been one of the worst teams in the NBA over the last month, losing its last seven games against teams above .500. Hammer the Bulls on the moneyline here.

Did you know that if you parlayed today’s NBA Bulls vs. Spurs predictions and picks in a single-game parlay, you could win $62.89 on a $10 bet? 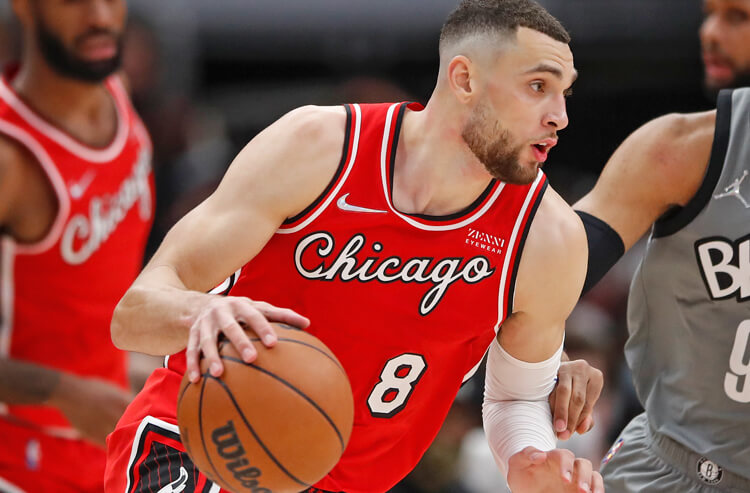 Bulls vs Spurs Picks and Predictions: Chicago Tramples Spread on the Road
Provided by

Mavericks vs Warriors Game 1 Picks and Predictions: Dallas Should Cover as Road Dog
Jason Logan | May 17, 2022

Mavericks vs Suns Game 7 Picks and Predictions: Dallas' Momentum Carries Into Game 7
Rory Breasail | May 15, 2022
About Us
Contact Us
Careers
Our Team
Brand
Testimonials