Scoring is what the NBA's all about, and tonight we've got a trio of great points props that players on hot streaks should top. Get the breakdown and find out why we're backing DeMar DeRozan among Friday's NBA player prop picks.

Let’s kick the weekend off right with some winners in the NBA player prop market, and with 11 games on the schedule, there is plenty of betting value to be found.

Today, we focus on a pair of guards with a chance to put on a show, including recently selected All-Star starter DeMar DeRozan, who will lead the Chicago Bulls against his former team the San Antonio Spurs.

Check out our NBA player prop picks for Friday, January 28, as we bank on some of the NBA's best to do their thing.

The Portland Trail Blazers are at a crossroads. They are 20-28 this season and sit in the 10th spot in the Western Conference. While that is a play-in spot, Damian Lillard’s return is a long way off and the team could decide to become sellers at the trade deadline. But for tonight, the task is the Houston Rockets.

With Lillard out, the Trail Blazers have had to re-work their offense and have started to get center Jusuf Nurkic more involved. Nurkic is averaging 20 points per game over his last seven games and is shooting 54% from the field while increasing his field goal attempts per game from 10.3 to 14.3. Nurkic will definitely be a problem for Houston.

The Rockets are one of the worst defensive teams in the NBA, ranking dead last in defensive rating and scoring defense. And one place they really struggle is in the interior, ranking 29th in opponent points in the paint allowed.

With Nurkic’s upped usage rate going against a suspect Houston defense, he shouldn’t have much trouble going Over his point total of 18.5, a number he has eclipsed four times over his last seven games while scoring fewer than 18 just once over that span.

After a game in which they allowed the Charlotte Hornets to score a ridiculous 158 points, it appears that the Indiana Pacers have thrown up their hands and said, “We give up.”

And with still no Myles Turner, Malcolm Brogdon, T.J. Warren, T.J. McConnell, and a questionable Domantas Sabonis, things aren’t looking up. Even in a matchup against the 14-33 Oklahoma City Thunder.

While the Thunder have one of the worst offenses in the NBA you wouldn’t know it by looking at Shai Gilgeous-Alexander. The OKC point guard is averaging 27.8 points while shooting 48.4 % from the field over his last eight games and has put up 29 points or more six times over that stretch.

Now, he faces a Pacers team that ranks 24th in defensive rating for the season, ranks 21st in opponent guard scoring, and looks like it just said, “that’s enough” in its last game. Bet on SGA to keep up his scoring run in this one.

DeMar DeRozan was just announced as an Eastern Conference starter for the 2022 NBA All-star game. And deservedly so. DeRozan, in his first season in Chicago, has helped propel the Bulls into one of the top teams in the East while putting up great numbers.

The 32-year-old shooting guard is averaging 26.4 points per game with an effective field goal % of 51.3 while adding 5.0 assists and 4.8 assists per game. Now, he gets a great showcase of why he has been so effective this season when he faces his former team, the San Antonio Spurs.

The Spurs really struggle when it comes to containing opposing guards, ranking next-to-last in the NBA in opponent guard scoring giving up 73.8 per contest. (Funnily enough, only the Bulls are worse). So, it will be interesting to see how they handle a red-hot DeRozan.

The Bulls shooting guard has played well all season but has taken it to another level recently. DeRozan is averaging 33.8 points per game and is shooting nearly 60 percent from the floor over his last four games, putting up no fewer than 29 points in those contests. With his point total at just 25.5 and juiced to -105, that’s too nice to say no to. 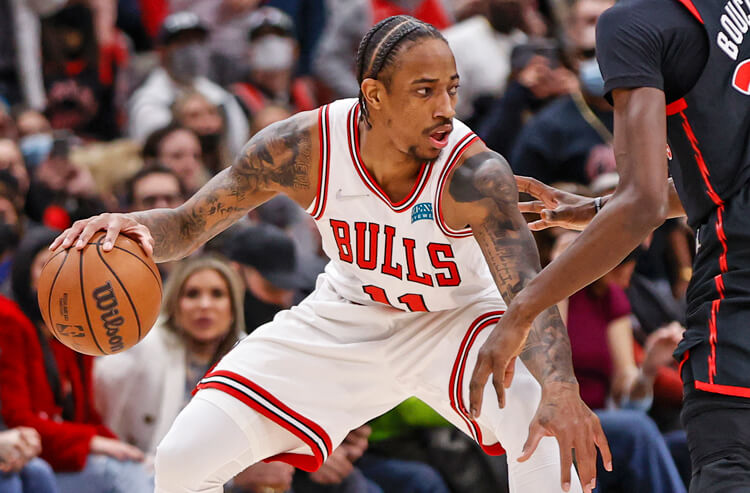